While the Emini traded below Friday’s low and triggered the Low 1 sell signal on the daily chart, the odds are against a big bear trend day. Friday was a big day. Therefore, the stop is far above. This creates a big risk. Since the Emini has been in a tight trading range for 3 days, the probability of the breakout is low. Big risk and low probability is a bad combination for the bears. Therefore, it is more likely that the opening selloff will not be the start of a bear trend day.

Since yesterday was mostly a trading range and markets have inertia, and the sell signal on the daily chart is weak, the odds are that today will also have a lot of trading range price action. While the bulls can rally from a failed breakout below yesterday’s low and create a strong bull trend, the context makes this unlikely.

In conclusion, the odds favor another trading range day where there is at least one bull swing and one bear swing. Since the Emini is at the bottom of the past 80 bars, the odds are that the current selloff will be limited. Therefore, there will probably be a swing up beginning by the end of the 2nd hour.

The Emini had a failed breakout below both the September low and the bull trend line last week. Yet, the buy signal bar had a tail. Furthermore, Friday was the entry bar and it had a bear body. Hence, the failure was weak. Bears see the failure as a bear flag, and will look to sell a Low 1 today or a Low 2 later in the week. A drop below Friday’s low will trigger the sell signal.

The bulls know that their reversal up has been weak. They will therefore try to get a strong breakout above the bear flag, and then a rally to a new high. The probability favors the bears, but if the bulls get a strong reversal up this week, they will again gain control.

Because the daily, weekly, and monthly charts have all had sell signals, traders have to be ready for a strong bear breakout. The reversal down has been minimal.

Yet, the double bottom with the September 12 low is a good setup for the bulls. If the Emini falls below last week’s low, traders will begin to believe that the Emini might have a successful breakout below the double bottom. As a result, if the breakout is big, it could lead to several days of selling. Furthermore, that selling would then probably close the gap above the July 2015 trading range, and test the July 6, 2016 pullback low.

While the Emini is down 3 points in the Globex session, it is 5 points above the overnight low. Most of the trading was within a range, which increases the chances of mostly trading range price action today.

Because Friday was a Low 1 bear flag sell setup, if the Emini trades below Friday’s low, it would trigger the sell signal. Yet, because it is at the bottom of a 2 month trading range, the odds favor more sideways trading. The bears might need a Low 2 sell signal before they can get their breakout.

Sine the bulls want to trap the bears into selling at the bottom of a trading range, they don’t mind a breakout below a bear flag. Hence, the want a failed bear breakout, and then a reversal above the bear flag. They then would see the chart as a double bottom bull flag with the September low. 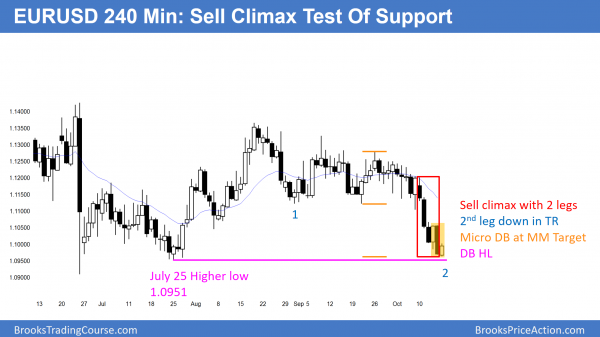 The 240 minute EURUSD Forex chart is testing the July low. The sell climax had 2 legs down in 6 bars, and it was the 2nd leg down from the August 18 high. Trading ranges often reverse up when near the bottom after 2 legs down.

The weekly EURUSD chart had a strong bear breakout below an 8 week tight trading range last week. Since it was still within the 18 month trading range, the odds are that this week will not provide strong follow-through selling.

The 60 minute chart had a series of Gap Bars last week. Because the bulls were able to put bars completely above the moving average, they demonstrated strength. That gave the bulls a 60% chance of an attempt of a major trend reversal early this week. Yet, the selloff of Friday was strong. Because it was strong, the bulls might have to create at least a micro double bottom before they can get a reversal. Furthermore, when the bear channel is this tight, the first reversal up usually does not go too far before the EURUSD tests back down. The next support is the September 25 higher low at 1.0950.

The EURUSD 240 minute Forex market has rallied overnight. Yet, the rally lacked consecutive big bull trend bars closing on their highs. Furthermore, it is following 8 consecutive bear bars. Therefore, this rally from just above support is probably a minor reversal. The bulls will probably need a test down this week to form a larger double bottom before they can test the 1.1120 bottom of the September trading range.

While the Emini is pausing at support, the bears hope that the rally is just part of a bear flag. They will sell a reversal down from a micro double top near the moving average. That would be a small Low 2 bear flag. Bear flags have a higher probability of leading to another leg down when they form below support, rather than above support. Therefore, the odds favor sideways to up trading for several days. 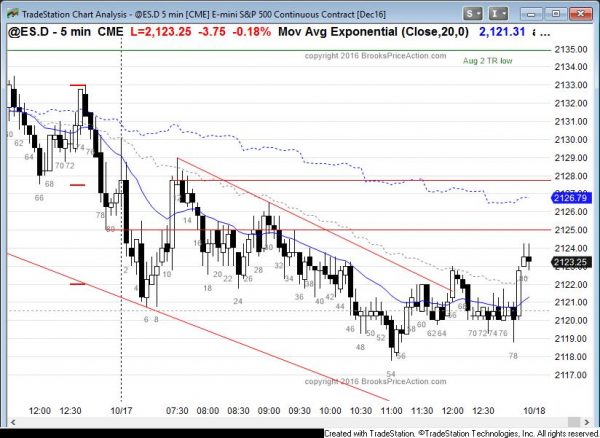 The Emini reversed up from below yesterday’s low on a 2nd signal buy, yet failed to get above the high of the open. It then sold off in a weak channel for most of the day. Bulls bought new lows for scalps and bears sold near the moving average.

While today was the entry bar for a Low 1 sell signal on the daily chart, the bear body was not big and there was a tail below. This increases the chances of another sideways day tomorrow.