Today began with a continuation of Friday’s tight range. This therefore increases the chances of another mostly trading range day. Yet, since Friday was so extremely tight, day traders will watch for a breakout into a trend day today. The 3 week range is still above the daily moving average. Hence, it is a bull flag. The odds therefore favor a bull breakout attempt soon.

At the moment, the bulls have an Opening Reversal up from the moving average. They want an early low of the day. While the Emini is Always In Long, many traders are waiting for a strong breakout and bigger bars before swing trading. The bears want a 2nd failed reversal down from above Friday’s range. This could create an early high of the day.

The Emini is in breakout mode, and it might take 1 – 2 hours before the 1st swing begins. Quiet opens when the market is in breakout mode have an increased chance of evolving into Small Pullback Trend days. If the day begins a weak trend up or down, but forms gaps, the trend could go a long way.

The Emini has been in a tight range for 3 weeks. Because the bull trend is strong, the odds favor higher prices. Yet, since the weekly chart has never been this overbought, the odds are against much higher prices without a pullback below the weekly moving average.

The past 2 weeks were small bars on the weekly chart. This is weak follow-through on the breakout above the prior high. Consequently, last week is a sell signal bar. While the bar itself is a weak signal bar, the context is good. The odds favor a 2 – 3 month correction starting at any time.

The Emini is up 2 points in the Globex market and it traded in a tight range. There is no sign that today will be different from the last few days. Therefore, the odds favor another mostly sideways day. Since the 4 week range is tight, it increases the odds of a strong breakout up or down. Because the weekly chart is so extremely extended, the odds are that any strong bull breakout will fail. 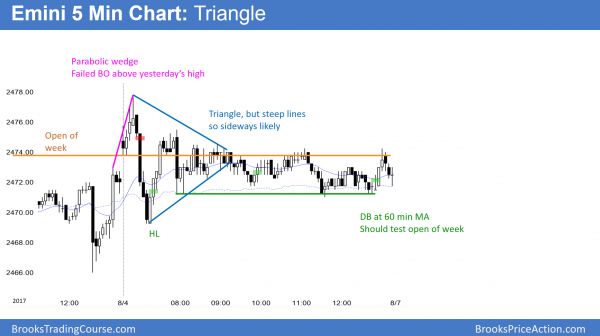 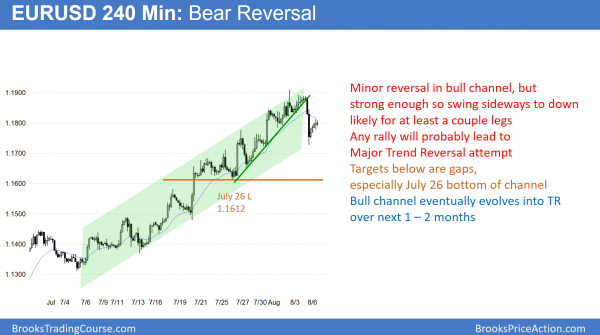 The bear reversal on the 240 minute EURUSD Forex chart was strong enough so that it will probably lead to a swing sideways to down. The obvious 1st target is the July 26 low, which is the bottom of the wedge rally.

The bears got a strong break below the bull trend line of the past 3 weeks on the 240 minute chart. Since there was a wedge rally over the past 3 weeks, the odds favor at least a 2nd leg down and a test of the bottom of the wedge. That is the July 26 low and therefore it would be a 300 pip correction.

Since the bull channel on the daily chart is tight, the selloff will probably be minor on that chart. This means that the best the bears will probably get is a trading range over the next month or two. Bulls will therefore buy reversals up from tests of support. However, since they, too, believe that there will be at least a 2nd leg sideways to down, they will be quick to take profits. Consequently, the odds are against trend resumption up over the next couple of weeks. However, if the bull trend strongly resumes, they will conclude that the correction is over. The odds favor sideways to down for several weeks.

The 5 minute chart has been in a 30 pip range for the past 5 hours. The rally up from Friday’s low has been in a channel. In addition, it lacked consecutive strong bull bars. Furthermore, it is testing Thursday’s low and is around a 50% pullback. While the rally might continue to above 1.1900 and it might last a few days, the odds favor at least one more leg down on the 240 minute chart. Therefore, day traders will look for a sell setup for a swing down. There is enough two sided trading for scalpers to buy and sell.

Since the rally on the weekly chart is strong, this selloff might be a bear trap. If there is a strong rally on the 5 minute chart, day trading bulls will be willing to swing trade, betting that the reversal down was a brief bear trap. The bulls need to see a bull breakout above the bear flag on the 240 minute chart before they will swing trade. 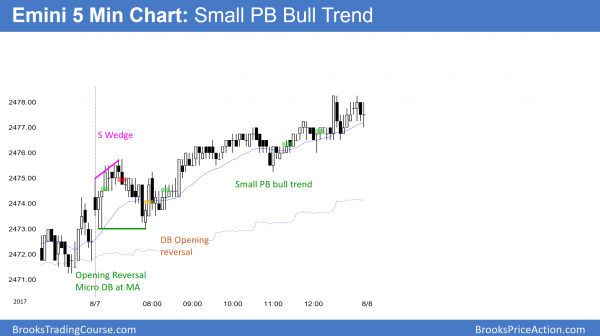 The Emini had a small pullback bull trend day today, but was also an extremely small day.

The Emini has been sideways for a month. Since it is above the moving average, the odds favor higher prices. Yet, because the weekly chart has an extreme buy climax, the odds are that a bull breakout will fail. There is a risk of a brief strong breakout that leads to leads to a climactic reversal.