The Emini had a huge gap down, but it is a pullback below the monthly moving average and 20 gap bar buy. The monthly bulls bought. There is a 70% chance that the low of the day is in. A measured move up from the bodies of the 2nd and 3rd bars projects to yesterday’s low, but that is an unlikely target at the moment. The Emini is Always In Long, but the bars are so big that most traders should not trade unless they can trade small enough.

Although there have been consecutive bull trend bars, there have also been reversals. Just as there are buyers at the monthly moving average, there will be sellers at the 5 minute and 60 minute moving averages. However, the odds are that today will be sideways to up, and it might be a very strong bull trend day. There will probably be a lot of trading range price action, even if today is a bull reversal day, because big down, big up creates big confusion. The chance of a crash is very small, and the chance of a new low of the day is maybe 30%.

The Emini is down about 65 points, and if it opens here, it will be below the monthly moving average. The bulls have been willing to buy above the average price for 38 bars (months). There will be bulls who will be happy to buy below the average price. The odds are that the selling will at least pause today or tomorrow. Not only will monthly bulls begin to buy, the bears trading the daily charts will also buy. The computers have to control risk. The stop is now far above, which means the risk is now great. The computers will begin to reduce risk by buying back part of their shorts. With bulls and bears buying, the odds are that the Emini will go sideways for at least a day or two.

Once profit taking begins and countertrend traders get confident, the result can be a very strong bull trend for a day or two. Online daytraders should be ready for that to start today or tomorrow. Since the bars and daily ranges are so big, traders need to trade very small. However, if a trader ignores the time and price numbers on the charts and simply looks at the candlestick patterns, he will see that the price action is the same as for any other day. If a trader cannot trade small enough, he can also trade options. When the ranges and uncertainty are this big, options are expensive. Those trading options should consider spreads if they plan to hold their position for more than a few hours. They should also consider spreads even if they are looking for a 1 hour trade because a strong reversal up will result in a quick drop in premium. The market can rally and a call can actually go down in value, although this is not likely.

The dollar was weak and the Euro and Yen were strong overnight. The daily chart of the EURUSD has had 4 consecutive big bull bars closing near their highs (including today, which has not yet closed), and it is reversing up from a double bottom (June and July) higher low major trend reversal. It is now just above the May high and therefore now has a significant higher high after a higher low, and is in the early stages of a bull trend.

While this rally is still only a pullback from the breakout on the monthly chart below a 10 year trading range to test the 1.2000 bottom of that range, it is a bull trend on the daily chart. The reversal up on the 60 minute chart is in a tight channel with a parabolic curve. This is a buy climax, and it should soon be followed by about 10 bars and 2 legs down (a pullback for a day or two).

The 5 minute chart is pulling back from a 2nd push up in a wedge channel. This is a potential top whether it has a 3rd push up to a new high, and a 5 minute top today or tomorrow would the start of the 60 minute pullback into a bull flag. Those learning how to trade the markets should only look to buy a pullback, especially on a higher time frame, like the 60 minute chart. The 60 minute moving average is around 1.1425, and there will probably be buyers there. Since the bulls have been willing to buy above the moving average for about 40 bars, the odds are high that they will be eager to buy at an average price.

The 60 minute chart of the EURCAD is similar to that of the EURUSD. It is extremely strongly up, but climactic. Although traders can buy for any reason, the stop is so far below at this point that those trading Forex markets for a living will stop buying the breakout and switch to buying pullbacks. The result will be a pullback today or tomorrow.

The USDJPY 60 minute chart is in a parabolic sell climax, and it has had bad follow-through after the last several big bear bars. Buyers are becoming stronger. The bears are getting quicker to buy back shorts and bulls are starting to buy bear closes. This is the early stage of a transition into a trading range, the the day trading tip is to look for trades in both directions today. Until there is at least one strong reversal up, it will still be easier to make money looking for shorts than buys. 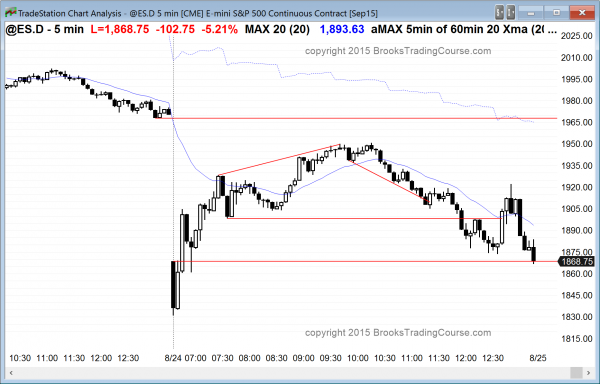 The Emini gapped down below the monthly moving average, which was the target I discussed all year, and reversed up strongly. It failed at the 15 minute moving average, tested down to the open of the day, and bounced into the close to form a trading range day.

The monthly bulls bought strongly today on the move below the monthly moving average, as expected. However, the daily chart is still in a bear trend. The bulls formed a higher low compared to the October selloff, but the selling over the past week was so strong that the odds are that there will be followed through selling and a measured move down. Because the Emini held above the October low today, the bulls might be strong enough to rally to about 50% up from the all-time high. This could even last several months. However, the selling was so severe and the monthly chart is still overbought. This makes is likely that the best the bulls can do for the next several months is create a trading range. Traders will sell rallies.

The reversal up today was strong enough so that the selling might stop for another day or even for several weeks. The bears will return for a 2nd leg down on the daily chart, no matter how long the bulls control the market, as long as the bulls are unable to create a reliable bottom or a strong reversal up to above the all-time high. This is Always In Short on the daily chart and it is a bear trend. Bear trends often have strong rallies, like today, but it is still a bear trend, and bears will sell the rallies, like today.