The Emini opened with a big gap up, but quickly sold off to a new low and it had trading range price action. Although today can still be a trend day, and the Emini is close to the bear trend line above, this type of price action increases the chances that today will have a lot of time within trading ranges. Unless there is a strong breakout up or down with strong follow-through, the odds are that today will be mostly a trading range day. Swings up or down will probably have weak follow-through and traders will be quick to take profits. Traders so far have been buying below, selling above, and scalping.

The bulls are hoping for a wedge bull flag near the moving average for the low of the day, but the odds are against a strong bull trend day even if the bulls are able to create an early low.

The bears need a strong breakout below the moving average. Even if they get it, the odds are that any selloff will be mostly within a trading range.

While a trading range day is most likely, traders should not be in denial if there is a strong breakout with follow-through. If the day transforms into a strong trend day, be prepared to trade it that way.

The Emini has been in a triangle on the daily chart since its strong bear breakout 2 weeks ago. Although it is in a bear trend and the odds favor a 2nd leg down after the current bear rally exhausts itself, there is a lot of room on the upside for the bulls. At a minimum, the bulls should be able to get above the bull reversal candlestick pattern on the weekly chart from 2 weeks ago. There are many measured move targets in the 2020 – 2050 area, and that area is also the bottom of the 7 month trading range. The probability is that the Emini should get there over the next few weeks. Once there, the Emini will probably fail and then reverse down.

Since the price action on the monthly chart is so bullish, the downside is likely limited, but the monthly buy climax could easily be followed buy a year of sideways to down trading. The one thing that is clear is that the probability is not clear, and uncertainty usually results in a trading range. The daily chart has been in a trading range for 2 weeks, and there is no sign that it will breakout soon. The top and bottom of the range are far, which means that rallies and selloffs can last weeks at a time. The swing trading strategy on the 60 minute chart is to buy low, and sell high, expecting the legs up and down to last at least several days.

The daily chart has had many gaps up and down over the past 2 weeks, and it will gap up again today. When there is a big gap, the Emini is usually limited in its range for the first hour or two and typically needs to get closer to the 5 minute moving average before it decides on its direction. Will the breakout be the start or the end of a move? Since the reversal up on Friday came from a double bottom with September 1 on the 60 minute chart, traders expect a test near the neckline above the 1973.50 lower high from last week. That lower high is a right shoulder of a head and shoulders bear flag, and it is an obvious magnet. The Emini will probably get vacuumed up close to it or above it today or tomorrow.

The bears want a lower high, hoping for a triangle bear flag. They would also be happy to see a double top bear flag with the August 28 lower high of 1992.75. The bulls want a strong breakout above these resistance levels. The odds favor a bull breakout because the selloff was climactic on the daily chart and the odds favor a test of the breakout point, and because there is a 20 gap bar buy signal on the monthly chart. However, the daily chart is in a trading range after a sell climax, and nothing can be very clear until there is a strong breakout of the range in either direction. Until there is, bears will sell rallies and take profits near the bottom of the range. The bulls will also buy near the bottom and sell near the top. The result is more trading range price action while everyone waits for a breakout.

The Emini ended Friday Always In Long and it will have a big gap up today. If there is a strong reversal down on the open, bears will sell, hoping for a trend from the open bear trend day. If there is a strong rally for the first couple of bars, bulls will buy, but since the gap up is so big, they will mostly take profits after 5 or 10 bars. This will create a sideways to down test near the moving average. If the sell off stabilizes there, bulls will buy for a swing trade up, hoping for a bull trend day. Whether the initial move is up or down for an hour or so, a big gap up usually enters a trading range that lasts an hour or two before the Emini will trend. However, a strong selloff on the open can lead to an immediate bear trend day. Even if there is a selloff, the Emini is closer to the bottom of its developing trading range than it is to the top, and the reversal up on Friday was strong enough for traders to expect that the first selloff will be bought.

The most interesting Forex cross is the USDCAD. I have written several times over the past few weeks that its daily chart is in a buy climax and that there is a 60% chance of a pullback to the bottom of the wedge top that started in early August. That is still 200 pips below. The breakout point of the prior high of the trading range of the first 4 months of 2015 is another 100 pips lower. Although August has been in a trading range on the 60 minute chart and it has had many sharp selloffs, none has been able to break below the trading range. Another selloff began overnight and it is strong enough so that traders learning how to trade the markets should be looking to sell rallies for a swing trade down on the 60 minute chart.

The selloff on the 5 minute chart is in a parabolic channel and it is therefore climactic. This means that there is at least a 70% chance of at least a couple of hours of sideways to up trading this morning. Those trading Forex markets for a living will initially prefer to sell rallies, but as the selling dries up on the 5 minute chart, they will also begin to buy new lows and scale in lower, looking for buy scalps as well. However, the EURJPY’s 60 minute chart had a weak rally with bad follow-through buying. This makes the overnight rally more likely a bull leg in a trading range than the start of a Forex swing trade up. The bulls need a strong breakout today before traders will be willing to swing trade.

The USDJPY has been in a trading range (a triangle) on the 5 minute chart for the past 5 hours after a strong rally in Asia. The odds are that this is a bull flag and that there will be a rally attempt today. However, each bar that gets added to the trading range reduces the probability for the bulls and the Forex market now is barely better than 50-50. 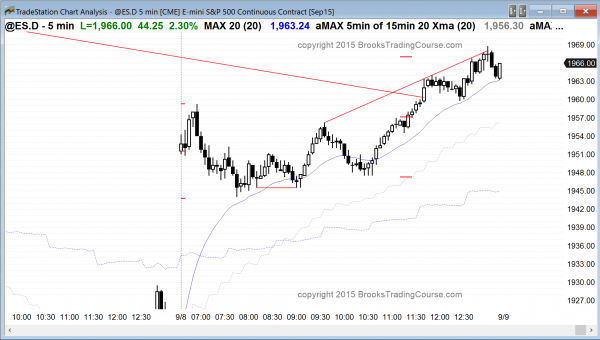 After a big gap up, the Emini pulled back to the moving average and formed a double bottom higher low major trend reversal within a tight trading range. The then rallied for a measured move up.

Although the Emini was in a trading range for the first half of the day, it trended for the rest of the day. The odds are that it will trigger the weekly buy signal this week by going above the top of the big bull candlestick pattern (buy signal bar) on the weekly chart from 2 weeks ago. Because the buying today was climactic, even if there is follow-through buying for the 1st hour or two tomorrow, there is a 75% chance of at least 2 hours of sideways to down trading, starting within the 1st 2 hours.