The Emini opened with a strong bull breakout and an early test above last week’s low. The bears want a sell vacuum test of last week’s low and the 60 minute moving average, and then an endless pullback and a bear trend day. It is more likely that the buy climax on the open will be followed by a trading range. The low of last week was the most important price coming into the day, and it might remain the most important price all day. The Emini might oscillate around it all day, and then decide at the end of the day whether to close above or below it.

More likely, the Emini will be in a trading range for an hour or more. The bulls want the initial breakout to lead to a measured move up. This is not likely. The rally was climactic and it reached the target. This might be the start of a spike and channel bull trend. However, because the rally paused at the target instead of breaking far above it before pausing, the odds are that the Emini will probably enter a trading range soon.

The day trading tip is to expect a trading range day in the Emini today. I said repeatedly before the October buy climax that the odds were that the Emini would probably go sideways for about a month and form a trading range with both a double bottom and double top. The selloff of the past 2 days formed the double top. If the Emini bounces over the next few days, it will then also form a double bottom. At that point, the Emini will be in Breakout Mode. The bulls will see a double bottom bull flag and look for a breakout to a new all-time high. The bears will see a nested double top (the October-November double top combine to create a double top with the July all-time high on the weekly and monthly charts), and will expect a bear breakout and then a test down to the October low. I will discuss this more in my weekend blog.

Yesterday was the 2nd day of a 2 day sell climax. There is a 75% chance of at least a couple of hours of sideways to up trading today. Today is a Friday, so those who trade the markets for a living will be watching weekly support and resistance in the final hour. Traders learning to trade the markets should look at the weekly chart. This week was an outside down week. Yesterday broke below last week’s low. That breakout point at 2067 is a magnet, especially at the end of the day. The bears want today’s close to be below it so that the week would close below last week. This would be a sign of strength and make traders more willing to sell low and not wait for pullbacks to sell. The bulls want the opposite. That is the most important support or resistance point on the chart. The next most important one is yesterday’s low. The bears want this week to close on its low. Since the Emini has been in a trading range since the October buy climax, the odds are bulls and bears will both be disappointed. Since the bears just had 2 strong days and want strong follow-through today, they will probably be disappointed. This means that today will probably close above last week’s low.

Also, yesterday was a strong bear breakout below a bull trend line on the daily chart. The bears want a bear body today on the daily chart as follow-through selling. If they get it, traders will see today as confirmation of the bear breakout. This would increase the chances of follow-through selling over the next week. Since the bears will probably be disappointed, the easiest way for that to happen today is for the bulls to prevent the bears from creating a bear body on the daily chart. This means that the bulls will try to make today close above its open.

If today is a trading range day, which is likely, it will have at least one swing down, lasting 2 – 3 hours, and one swing up. No one knows which will come first. However, traders will watch the price action during the initial swing. If it contains many consecutive strong trend bars, a trend day will be more likely. What is more likely is that there will not be consecutive big trend bars. Instead, it will probably have many bull and bear bodies, lots of dojis, and many reversals. If so, the odds are that it will be a leg in a trading range, and today will be a trading range day.

I have been saying for 2 weeks that the wedge bottom on the EURUSD 240 minute chart was likely to lead to a rally that would test of either 1.0800 or 1.100. The breakout of the past 24 hours has tested both. The bulls see yesterday’s strong bull reversal as a double bottom higher low with the April low. The bears see it as a bear rally that is testing the bottom of the May-October trading range. They are both right. However, when a breakout is as big as yesterday’s was, there is a 60% chance that it will lead to a measured move up. The measured move can be based on the size of the bull body on the daily chart or on a leg 1 = leg 2 rally after a pullback.

A 400 pip rally is about a month’s worth of price action and it formed in one day. The EURUSD might pull back 50% or more over the next several weeks before the 2nd leg up and a measured move target is reached. However, the rally was enough to make traders see the EURUSD as being in a bull trend on the 60 and 240 minute charts. Although bears who are day trading can still look to scalp shorts, it will be easier to make money buying. Traders should look for buy setups for swings and for scalps. The stop for traders on the 240 minute chart is still below yesterday’s low because the bull have to allow for a very deep pullback. This means that the bulls have to trade small. Once there is a pullback and then a new high, the bulls can tighten their stops. 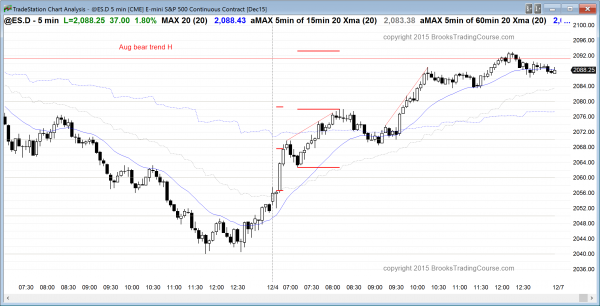 The Emini had a strong bull breakout on the open. The bears tried for a reversal down from a parabolic wedge just after 8 a.m., but failed to generate enough strong bear bars. The bulls bought the pullback to the moving average, and the Emini rallied for the rest of the day. The bulls took profits after the wedge top.

The Emini reversed the 2 days of selling and close near the open of the week. The week became a doji bar after last week;s doji bar. The daily chart has both a double top and double bottom and is in breakout mode going into next week. It might stay sideways until the Fed’s interest announcement in 2 weeks.