Most days over the past 2 weeks have begun with tight trading range trading within the first hour, and today followed that pattern for the first few bars. Because of the gap up to the top of a channel, and because yesterday’s strong rallies both fell below their breakout points, the odds were good that the Emini would test down, possibly below yesterday’s high. Instead, it reversed up from below the low of the 1st bar.

Since the Emini is not breaking strongly above the top of the bull channel, it will probably work sideways to down to the bottom of the channel. Bears should wait for a second entry short or for a strong bear reversal because the rally from yesterday’s low has been strong and there is the magnet of the all-time high just a little higher.

At the moment, the Emini is always in long, but it is at the top of a broad channel and it should soon test sideways to down. However, until there is a credible sell signal or strong reversal down, shorts are only scalps, and bulls will buy pullbacks for swing trades up.

My thoughts before the open: Bull trend channel

The Emini has been in a bull trend channel for over a week after a strong reversal up from below the bottom of a month long trading range. It is testing the all-time high. The bears want a double top, which is a major trend reversal, and the bulls want a breakout.

The Emini will probably have a gap up today, but it will then be near the top of the bull trend channel of the past week. Since most attempts to break above a channel fail, traders will be ready to short if the Emini breaks above the channel and begins to reverse down.

Yesterday’s bull trend reversal was strong enough so that there was likely to be follow-through buying today, and that is the reason for the gap up. Although the Emini has spent a lot of time in tight trading ranges over the past week, that reversal increases the chances for swing trading today. Yesterday ended in a bull trend, and the bears need a reversal.

Whenever there is a gap up, there is an increased chance of a trend from the open bear trend. If the first bar is a strong bear trend bar, traders will be ready to short below it. If it has a prominent tail below, traders will wait for consecutive trend bars in either direction before they begin to use stop orders for entering.

This is especially true because most days over the past couple of weeks had early tight trading ranges, which means mostly limit order entries. Most traders should wait for a good stop order entry or for a strong breakout in either direction with follow-through.

Although channels usually become flatter and broader and transition into trading ranges, and the Emini is near the resistance of the all-time high, traders will need a sign that the transition has taken place before they will be willing to swing trade from the sell side. Until then, they will see selloffs as bear legs within the bull channel or within a developing trading range. 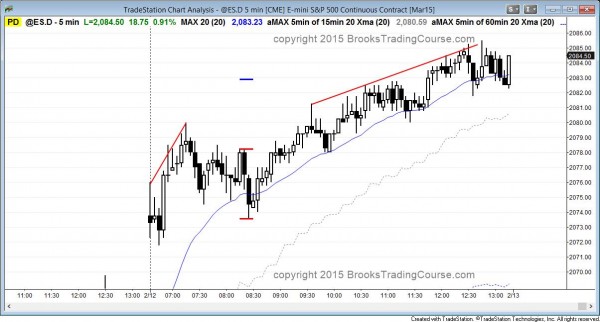 After a gap up and a parabolic wedge top, the Emini went sideways to the moving average, where it found buyers. It became a small pullback bull trend day, but most of the day was within tight trading ranges.

After a sideways open and a failed bear breakout, the market trended up in a tight channel for the rest of the day. The all-time high is 2088.75 and it is an obvious target for tomorrow. The bears want a double top, and the bulls want a breakout and measured move up. Since tomorrow is a Friday, the market will pay attention to magnets on the weekly chart. The only 2 within reasonable reach are the all-time high, and last week’s high of 2068.

Since today was in a tight bull channel, it will probably have a bear breakout tomorrow. With the Emini so close to the all-time high, it might get drawn up to it before a reversal down takes place. Less likely, there will be a bull breakout above the bull channel, and then a strong bull trend day. Although this is not likely, traders cannot dismiss it because it would offer good swing trades for bulls who are not in denial.