The Emini broke above the top of the bull channel on the open and it formed a new all-time high. However, the rally lacked consecutive big bull trend bars. Also, yesterday was in a tight channel for 4 hours, and that is extreme behavior.

Since the Emini is still in a bull trend, bulls will buy pullbacks. The initial rally has been weak, which means that bulls are hesitant to buy too high. It is still to early to short, but bears are willing to sell if there is a second entry short or a strong reversal down. If a trading range forms, bears will look for a major trend reversal. However, they probably need much more selling pressure before they have a chance at a bear trend.

My thoughts before the open: Double top or bull breakout

Yesterday ended with a small pullback bull trend. It was strong enough so that the Emini will probably test the all-time high today. Over the next several days, it will decided between a bull breakout and another leg up, and a double top with the December 26 high. Because a bull trend resists reversals, the odds slightly favor higher prices near term, but the monthly chart is so overbought that the upside is probably limited. The bears have sold every new high for over a year, and each reversal down fell well below the breakout point. This has created a broad bull channel on the daily chart. Bears will continue to “scalp” shorts on the daily chart, scaling in above prior highs. Bulls will continue to buy pullbacks and swing traded, and they take partial profits at new highs.

Because yesterday was in a tight bull channel for 60 bars, it is over-extended. This increases the chances of at least a 2 hour trading range or pullback at some point, and it will probably begin within the first two hours. However, because there was no top, there will probably be some early follow-through buying. The Emini will probably have a small gap above the channel and test the all-time high. Since most breakouts above bull channels fail, further upside will probably be limited and the market should quickly reverse back down to the bottom of the channel. Since the channel is tight, the bottom is close and the selloff is more likely to be more sideways than down.

A lot of trading range trading is likely today, but because the market is testing an important resistance level, traders will be ready to swing trade up or down if there is a strong breakout or reversal. 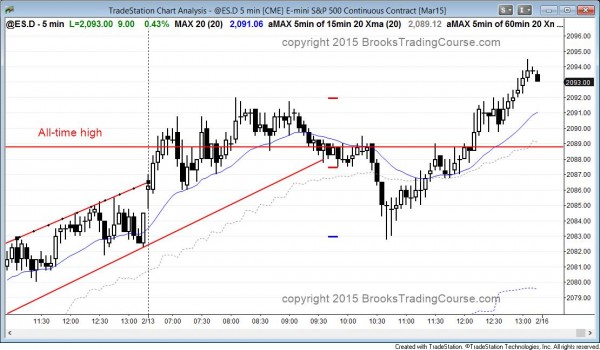 The Emini broke above a bull flag, and then reversed down, as usually happens. The early trading range tested to a new low of the day and then closed at a new all-time high.