The Emini reversed up from below yesterday’s low and formed a 2 day high 2 buy setup. If the bulls are able to rally to a new high, the rally will probably fail and create a final flag top. This would create a bigger pullback. The bears are hoping that this 2 day tight trading range is a double top major trend reversal. The bears need a breakout below yesterday’s low. Otherwise, the bulls will try to rally to a new all-time high over the next two days.

At the moment, the reversal up from yesterday’s low is weak, but it is enough to make the Emini always in long. If the bulls get a strong breakout with follow-through, they might be able to create a strong bull trend day. However, this initial rally is weak and it looks more like a bull leg in a trading range.

My thoughts before the open: Pullback to test support 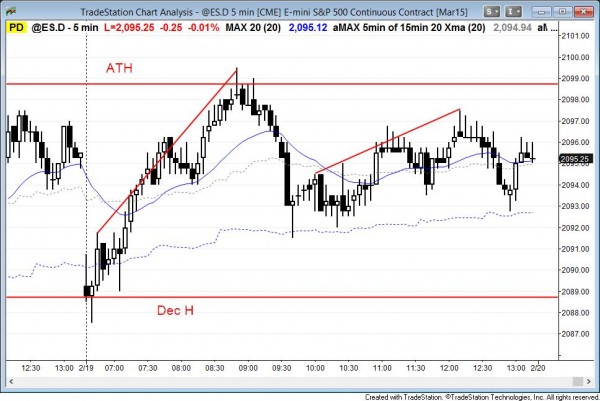 The 60 minute chart had a 20 gap bar buy on the gap down on the 5 minute chart, and it rallied to a new all-time high. The parabolic wedge top there became the high of the day. There was a sell climax that tested the 60 minute moving average again and it was followed by a broad bull channel.

The 60 minute chart has been overbought, and it finally pulled back to the moving average. As expected, it found buyers. The Emini again failed at a new all-time high. The 60 minute chart is in a tight trading range late in a bull trend, and this is a possible final bull flag. The daily chart has had 7 consecutive bull trend bars. This is unsustainable and therefore climactic. There should be a pullback soon, maybe to test last week’s gap up.

See the weekly update for a discussion of the weekly chart and for what to expect going into next week. With so many magnets so close to where the market is, and with so much trading range price action, the market will probably have a lot of trading range trading tomorrow. It is in breakout mode and it could have a big move, but that is less likely at the end of a very quiet week.