The Emini broke above the top of the 5 day bull channel on the open. This is a wedge bear flag. It then reversed down, as expected. The bears are hoping for a bear trend day. The bulls would like the selloff to be a bear leg in a trading range. If that happens, they will then try to create an opening reversal and then a new high.

At the moment, the Emini is always in short. The selloff is big enough to make a bull trend day unlikely. However, the day still could end up going sideways within yesterday’s trading range. Until there is a strong reversal by the bulls, bears will continue to swing trade and they will sell rallies. They will hope that today becomes a bear trend day. The bulls initially will only consider scalps until they create a credible bottom. Since the Emini has had so much trading range price action over the past few weeks, there probably will be a lot of trading range trading today, despite the strong initial selling.

My thoughts before the open: Bull breakout of a wedge bear flag

That 2060 lower high is an important magnet. As long as the rallies stay at or below it, the bears can claim that they still own the market. If the bulls can break above it, the bear swing of the last month will have ended and traders will see the selloff as just a bear leg in a 3 month trading range. Because it is such a critical price, the Emini might get vacuumed up there, and then it would decided between a double top bear flag and a bull breakout above a lower high. 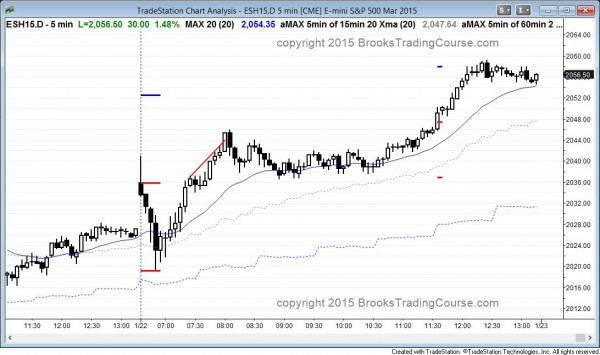 After selling off 18 points on the open, the chance of a bull trend day was very small. There has only been one other bull trend day in the past year with a tail below that was this big. The bulls got trend resumption after a 3 hour trading range and tested the 2061 lower high from 2 weeks ago. The bears want a double top, and the bulls want a breakout. Today’s strong trend makes the bull case stronger. However, the Emini has been in a trading range for several months and today’s rally might end up as simply a buy vacuum test of resistance. Until there is a breakout with follow-through, traders will continue to assume that breakouts up and down will fail.