The Emini opened with a big gap down, but had early trading range price action. This often is the start of a sideways to up move to get closer to the moving average. At that point, the Emini decides between an opening reversal down and a trend up.

My thoughts before the open: Double top bear flag

Today will open with a big trend reversal down from yesterday’s close. Greece has nothing to do with this. There is news every day…terrorism, Russia, oil, a weak president, etc. There is always something happening whenever the market makes a move and it is naive to say that the news caused the move. The monthly chart is extremely overbought and will probably have a 20% correction this year. When it begins, there will always be many news stories happening. They have nothing to do with the reversal when it happens. It will happen because the Emini discovered that it probed too high, and then it needs to probe down to find the bottom of the monthly channel.

Whether today is the beginning of a bear trend on the daily chart remains to be seen. Over the past 3 weeks, the daily chart of the Emini has created both a double bottom bull flag and a double top lower high major trend reversal. It is in breakout mode. Today’s gap down is still within the pattern. However, it might end up being the start of the bear trend. More likely, it will just be another leg within the 3 month trading range. Traders know, however, that one of these legs will be the start of a big move on the daily chart. As you know, I have a bearish bias because of how overbought the monthly chart is, but it could get much more overbought before it corrects 20%.

A big gap increases the chances of a trend day in either direction. A big gap down has a slightly greater chance of the trend being down. When there is a big gap opening, if the Emini sometimes moves quickly down for 5 – 10 bars, it then usually go sideways for an hour or two until it gets closer to the moving average. At that point, it decides between trend resumption down and trend reversal up.

If instead of an initial selloff, there is a strong reversal up, the day can become a strong bull trend day and the trend can begin with that first bar, creating a trend from the open bull trend. Sometimes the reversal up will stall at the moving average and create an opening reversal and high of the day. In any case, a big gap is likely to have one or more swing trades. 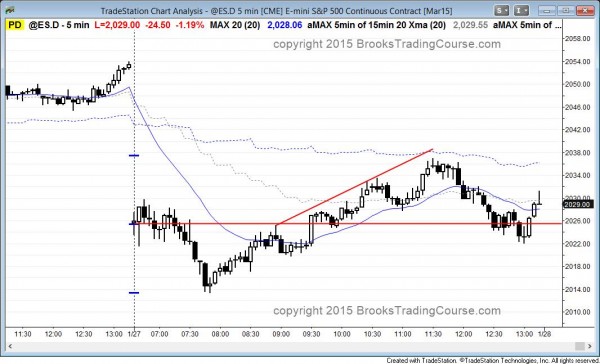 The Emini had a big gap down, but the selloff lacked consecutive strong bear trend bars. This made a reversal likely. It rallied to near a measured move up from the low to the open, and then came back to the open of the day to create a doji bar on the daily chart.

Tomorrow is an FOMC day and the report comes out at 11 a.m. There is usually a big move on the report, and the move sometimes quickly reverses. The market is in the middle of a 3 week trading range with both a double bottom and top. The report might be enough to create a breakout in either direction.