There was some initial follow-through selling, but the bulls are still looking for a two hour rally. They do not yet have a credible bottom, nor do they have a bull breakout. They need a better bottom or a bull breakout. Otherwise, the bears might get a bear breakout below the tight trading range and then a breakout below the 3 week trading range.

If the bears get their breakout, this initial trading range will probably be the final bear flag, and the bear breakout will probably reverse up before too long. That could be the start of a rally lasting at least a couple of hours.

Less likely, the Emini will break strongly below the bottom of the 3 week trading range and form a strong bear trend day. The market is currently always in short, but the odds still favor a bottom soon and then a rally or trading range lasting at least a couple of hours.

My thoughts before the open: Sell climax so a minor trend reversal is likely

Yesterday ended with a sell climax so a minor trend reversal is likely, even though there is not yet a sign of a bottom. While there might be some follow-through selling for the first hour or two, there is a 70% chance of a rally or trading range lasting at least a couple of hours today.

As strong as the selling was, the Emini is still within the 3 week trading range and it is still in breakout mode. This breakout attempt, like all of the prior ones, is likely to fail, and the trading range will probably continue. However, there will be a breakout at some point, and probably soon. The monthly bar closes tomorrow, and it currently is a bear inside bar, and it is following an outside bar. This inside-outside-inside (ioi) pattern is a breakout mode setup.

Since it is late in the monthly bull, a bull breakout will probably not get far before it fails. The reversal down would be a final flag reversal. Alternatively, it could simply break to the downside next month. Although an ioi is a small tight trading range and the breakout could fail, the context is good for a 20% pullback at any time on the monthly chart, as I have posted many times. 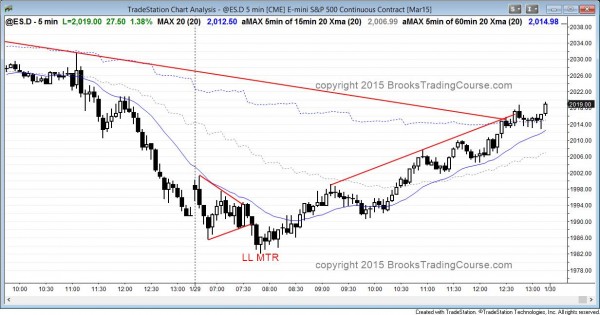 As expected, there was some follow-through selling after yesterday’s sell climax, and then the Emini reversed up and rallied for at least 2 hours. The early triangle became the final bear flag, and the Emini rallied all day after the lower low major trend reversal.

Today’s reversal up is forming a triple bottom bull flag on the daily chart. The daily chart is in breakout mode, but until there is a breakout, each of these strong bull and bear trend days are just legs within a trading range. As expected, as strong as last week’s rally was and yesterday’s selloff was, neither successfully broke out of the tight trading range. However, the monthly bar is currently forming an ioi pattern (this month is within last month’s range, and last month was outside of November…its high was above the November high and its low was below the November low). This is a breakout mode setup on the monthly chart.

Tomorrow is the last trading day of the week and month and therefore weekly and monthly support and resistance can be magnets that attract the market. Last week’s low is 1997.50 and it is just below the weekly moving average, which is also support. Last week’s close is 2044 and this week’s high is 2055, but that might be too far to reach. Last week’s high of 2059.25 is also probably too far to reach tomorrow. On the monthly chart, last month’s close is 2052.50. This month’s high is 2066.50, and the open is 2061.25. Both are probably too far to be reached. This month’s low is 1981.25, which is also the bottom of the 3 week trading range.