Today opened with a small gap down, but it closed within the first second. The bears wanted it to be the start of an island top on the daily chart and for it to become a measuring gap. Although the Emini opened always in short from yesterday’s bear close and today’s gap down, the bears need a strong bear breakout before many bears will swing trade their shorts.

Most breakouts fail, and the bulls will look for an early low of the day. They see the initial sell off as a sell climax in an oversold bear trend. Also, the 60 minute chart is oversold. Yesterday’s small 60 minute bear flag might become the final bear flag in the current leg down. Bulls will look for a reversal up for a swing trade.

At the moment, the bulls are trying to reverse up from the test of the December 18 gap. The Emini is always in short, but because the leg down was climactic in an oversold market, the odds favor a leg up lasting at least a couple of hours starting at some point within the first couple of hours. Until the bulls get a strong reversal up, bears will continue to sell reversals.

Because of the potential for a trend up or down, traders will be ready for swing trades today. They will look for consecutive, strong trend bars. If they develop in either direction, they will swing part or all of their position.

My thoughts before the open: Wedge top and island top trend reversals 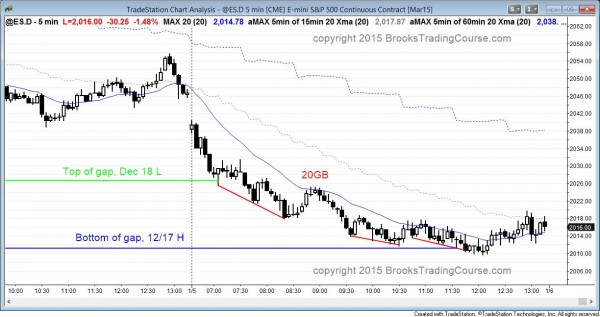 The Emini had a trend from the open bear trend that closed the gap up on the daily chart. It spent the 2nd half of the day in a tight trading range.

The Emini had a small gap down, but closed the gap in the first second. This prevented the formation of an island top on the daily chart. However, it sold off in a trend from the open bear trend and closed the December 18 gap up.

The selloff was weak enough so that bulls were buying 1 – 3 points below prior lows and scalping longs for 2 pts. The bears were selling near the moving average and scalping out at new lows. The result was a tight trading range.

There is still a bull trend line around 2005. The bulls are hoping that it provides support and leads to a new high. The bears are hoping that the high of the next several months is already in and that there are at least 2 legs down on the daily chart.

The 60 minute chart is oversold and near support (the bull trend line). The selloff today was weak. This combination increases the chances of a rally lasting at least a couple of hours tomorrow. However, there might be some follow-through selling on the open that results in a test of the trend line.