Today opened with a big gap up but possible buy climax. Although the Emini might work sideways to the moving average, the odds of a bear trend day are small at this point. The bears would need a strong reversal with follow-through, and that would be unusual unless there was a rally that formed a parabolic wedge over the first hour or two. Because this can happen, traders will watch for a tight channel up with three pushes for a possible buy climax and high of the day. Without that, bulls will look to swing trade and to buy the first pullback that gets close to the moving average. When there is a big gap like this, the Emini usually goes mostly sideways for a couple of hours and then decides between trend resumption up and trend reversal down. 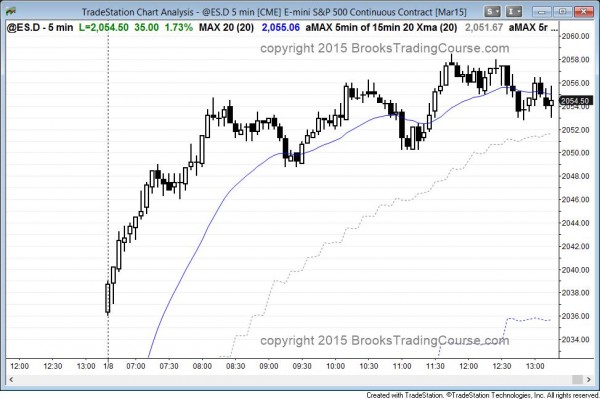 The Emini gapped above the neckline of the 60 minute double top (head and shoulders bottom) and rallied strongly in a trend from the open bull trend. It ended the day in a broad bull channel.

As I mentioned many times in the trading room yesterday, I thought that the Emini would rally to around 2060 because the October rally was so strong that the bulls would try for 1 more new high, and they should be able to retrace at least half of the current leg down. They bought so strongly in October that the rally reset the count and became the first and no longer the 2nd leg of the wedge on the daily chart.

After the climactic initial rally, the Emini entered a broad bull channel and the bears were able to scalp shorts all day above prior highs. The bull continued to buy bear reversal attempts.

Tomorrow has an unemployment report before the open and that will probably result in a gap up or down. Since tomorrow is a Friday, weekly support and resistance becomes important, especially at the end of the day. The only nearby targets are today’s high, which is the high of the week, last week’s close of 2046.25, and this week’s open of 2038.25.