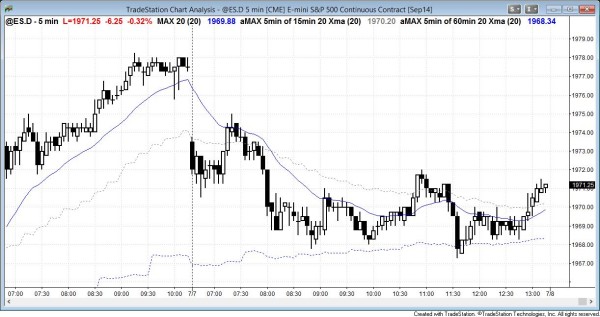 Posted 8:06 am PST.
The key feature in today’s intraday update is the small trading range price action after a weekly buy climax. The weekly chart has an 10 bar bull microchannel. Since it is late in a bull trend, it is probably a buy climax and not the start of a new leg up. A trading range is likely soon. The daily chart had 5 consecutive bars without a bear body and a 6 bar bull microchannel, which is climactic behavior when it occurs late in a bull trend. Yesterday also gapped above the day before and the gap is much more likely to be an exhaustion gap than a measuring gap. The strong bullish seasonal tendency ended on Thursday. Thursday was a signal bar for the bears. There is a wedge top of the daily chart, but the signal bar has a bull body and therefore creates a lower probability short.

The market is at a measured move target on the daily chart and at the top of the weekly channel. There is a 2/3 chance that the market will trend down to the bottom of the channel, which is the bull trend line. There are several bull trend lines below and the closest is around 1865 today. Since it is rising, if the market takes several weeks to get there, the bull trend line might be around 1900 by then, which is also around the breakout point of the 3 month trading range. Market tops, even small ones, usually require some kind of double top, which creates a second signal. This is the first signal, so there are probably buyers below and the market will likely make one more attempt at a new high before it will succeed in testing the bottom of the channel.

There was a lower high major trend reversal and an opening reversal at the moving average at 7:20 am PST, followed by a breakout to a new low of the day. This made the market always in short and will likely be followed by a test of the 60 minute moving average. The breakout will likely have at least one more push down because there are probably trapped bulls above who scaled in as the market fell. The very quiet, small trading range day so far reduces the chances of a trend day.