After a brief bull trap on the open, the Emini sold off, but the big bear bars were followed by bull bars. This is more common when a selloff is a bear leg in what will become a trading range. The bulls see the open as a sell climax and a parabolic wedge bottom. The bears see it as a strong bear breakout and the start of the 2 week trading range. The selloff was strong enough to that the bulls probably will not get a new high on the day. However, if this is a parabolic wedge bottom, it could be followed by a bull trend day.

Pre-Open Market Analysis
S&P 500 Emini:Learn how to trade a pullback after a buy climax

On October 20, the daily chart tried to turn down from a 2nd entry top as a failed breakout above the September high. Instead, it had a bull breakout with 3 pushes up. This is a 2nd top attempt. It is coming at 2 important resistance levels. It broke above the August 17 top of the bear trend, but not above the all-time high. This is more common in a trading range. Given a 2nd attempt at a top (a Low 5 top is a variation of a Low 4) in an overbought market that is showing trading range price action, traders learning how to trade the markets should not be eager to buy up here. Those who trade the markets for a living sense that something is wrong with this rally. I just put what is wrong into words. It is more likely that the Emini will begin to go sideways to down for about 10 days than it is that it will break out to a new all-time high this week, despite how strongly it has rallied over the past weeks.

Thursday triggered the sell entry on the daily chart. The entry bar and the Friday follow-through bars were weak. The bears need a big bear trend bar. The bulls see the 2 day pullback as a small bull flag. Even though the 2 days were weak for the bears, they lacked big bull bodies and are therefore weak buy signal bars for the bulls. A small bull flag just below resistance and after a buy climax is a low probability buy. This means that there are more likely sellers than buyers above Friday’s highs.

Unless the bulls get another big bull trend bar, like the October 22 failed top, the odds are that the Emini will begin to go sideways. Trader will begin to sell above bars instead of continuing to buy above bars. The bulls appear to be losing control and the Emini is becoming more 2 sides, which means that a trading range is becoming more likely than another bull breakout.

The bears hope that the entire 6 week rally is a final buy climax and the end of the bull trend. They want it to be a lower high test of the July all-time high that is followed by a bear trend. They see a big double top. At the moment, they have about a 40% chance of being right. When a rally is as strong as the past 6 weeks have been, the Emini usually can not reverse straight down. It usually has to go sideways for many bars and transition into a trading range instead of directly into a bear trend. This tends to limit the downside over the next couple of weeks. If the bears are able to halt the bulls and begin a trading range, then the probability of a bear trend after that goes up.

The dollar is overbought on the daily chart and will probably pause today or tomorrow. The EURUSD 60 minute chart has fallen in a series of consecutive sell climaxes. That is extreme behavior and usually unsustainable. Friday’s breakout below a wedge bottom was strong enough so that at least a small 2nd leg down was likely.

The EURUSD had a weak rally last night and then a bear breakout over the past 30 minutes. This is the minimum goal of the bears. The 2nd leg down can end above Friday’s low, or it could fall for a measured move based on the height of the 60 minute and 240 minute wedge bottom, which was about 250 pips tall. That projects down to around 1.0600. Another obvious target is the April higher low around 1.0500.

If it reaches either of these levels in the next couple of weeks, profit takers will probably come in. Aggressive bulls will also buy, expecting about a 10 bar, 2 legged rally on the 240 minute chart and possibly on the daily chart. The target for the bulls is the top of Friday’s sell climax, just below 1.0900. That will probably also be around the 20 day exponential moving average by the time the rally gets to that level.

The bear breakout of the past 30 minutes was strong enough for at least a small 2nd leg down, but the consecutive sell climaxes on the 60 and 240 minute charts make a rally beginning this week likely. It could begin today, or it could begin after another day or two down. Swing traders are selling today for a swing, but because a pullback on the 60 minute chart is likely this week, they will be quick to convert to trading range trading if there is not strong follow-through selling. 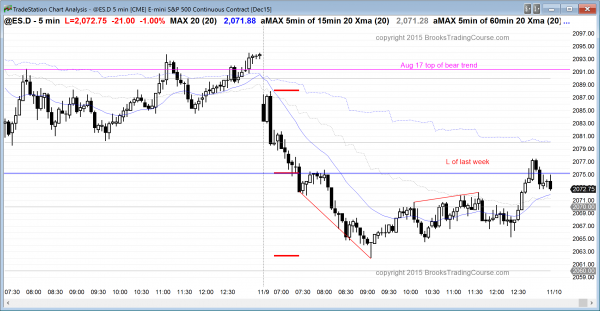 The Emini sold off below last week’s low and entered a trading range. After a double bottom higher low major trend reversal, it closed back around last week’s low.

The Emini fell for a measured move down from the high of the day to last week’s low, and then reversed back up to last week’s low. I have been saying for a couple of weeks that the weekly chart is so strongly bullish that the first bear reversal attempt would be bought. Today is that attempt.

Because of the Low 5 top on the daily chart, there will probably be sellers above today’s high and the Emini will probably enter a trading range for a couple of weeks.