The Emini opened with a gap up, but reversed down just below yesterday’s high and entered a tight trading range. It was Always In Short from the 1st bar and the bull reversal attempts were not enough to change it.

The bulls wanted an opening reversal up from support, like the moving average. The bears wanted a break below and a measured move down to yesterday’s close. There were several strong bull and bear bars. This reduces the chances of a strong trend up or down, and it increases the chances that the bulls and bears will be fairly balanced today and that swings will last 2 – 3 hours and reverse, forming a trading range.

The bears got their breakout at the end of the first hour, but the follow-through bar had a bull body, just like the earlier 3 strong bear trend bars. This increases the chances that this swing down will be a bear leg in a trading range day rather than the start of a bear trend day. The bears reversed down from a test of yesterday’s high. They now want a test of yesterday’s low. Whether or not they get it, their inability to control the market for more than 5 minutes increases the chances that the current swing down will be followed by a sideways to up move at some point, and the move will probably last at least a couple of hours.

The Emini is Always In Short. Even though a trading range is likely at some point, the bears are in control, and there is no sign of a bottom.

Pre-Open Market Analysis
S&P 500 Emini: Learn how to trade a test of support

The Emini will probably be sideways for a month or two, and it will have sharp moves up and down in the developing trading range. I said many times yesterday that the key price was around 1912 because it was both a 50% pullback from last week’s rally and a 10% correction from the all-time high. The Emini reversed up from the breakout below at the end of the day. The candlestick pattern on the 60 minute chart is a higher low major trend reversal, but most of the time a major reversal is followed by a big trading range.

The 60 minute bulls are hoping for a 2nd leg up and then a leg 1 = leg 2 measured move. The projection is around 2030 for computers that are using last week’s higher low as the start of leg 1, and 2050 for computers using last week’s low as the start. In either case, I have said that the 2020 – 2050 area will probably be the top of the bear rally. It is no coincidence that the computer chose yesterday’s low as a possible start of the 2nd leg up.

Whether of not the Emini tests down again over the next week, the odds are that it will test the breakout zone above 2020 at some point this month. September will likely be an inside bar on the monthly chart, and yesterday might have been the low of the month. The context for the reversal up was good, and the bulls will try for follow-though buying today and over the next several days. Since the daily chart is in a trading range (within a bear trend), the traders will be disappointed and confused. The bears will be disappointed by the lack of follow-through selling from yesterday, just as the bulls were disappointed by the strong selloff after last week’s strong rally.

I said many times yesterday that the Emini was in a trending trading range day, but that it had an unusual amount of buying pressure, and that this usually results in at least a minimal reversal up. The Emini in the Globex market has rallied 19 points above yesterday’s close and is testing the top of yesterday’s upper trading range. Yesterday gapped down and formed a 3 day island top. Since the daily chart is in a trading range, island tops and bottoms usually do not lead to trends, and the gaps usually close within a week or two. Yesterday’s gap down will probably close soon.

The gap up today and the context give the bulls the edge. Today might be a bull trend day. If not, then there will probably be a good bull trend day within the next few days. While it is possible for today to be a huge bear trend day, that is not likely because the daily chart is trying to form a trading range, and yesterday’s selloff reversed up at a reasonable support level. The support should hold for at least a couple of days. Since the daily chart is in a bear trend, traders should always be ready for big bear trend days to form, even when they are unlikely. Today is an example. The odds favor the bulls for at least a few days.

The bears do not mind a rally, but they want it to from a lower high. This would create another lower high in what they see as a 60 minute broad bear channel, and it would also be a head and shoulders bear flag if it stays below last week’s high (unlikely). The bulls want a rally above last week’s lower high and then a leg 1 = leg 2 measured move up. The bull case is slightly more likely, but even if the bulls win, the odds are that the rally will fail above 2020 and the Emini will then test last week’s low close, last week’s low, or the October low.

The Forex markets were in trading ranges overnight, and those who trade Forex markets for a living were either waiting for a breakout or scalping with limit orders. For example, in the EURUSD, they might buy every new low, risk 20 – 20 pips, scale in 10 pips lower, and scalp for 10 pips. If they add on, they might get out breakeven on their first entry and with 10 pips profit on their second.

One of the Forex crosses with the potential for traders learning how to trade the markets is still the USDCAD (or the EURCAD). The daily chart has been in a broad bull channel for a month, late in a bull trend, and it is likely going to transition into a trading range. A bull channel is basically a bear flag, and there is a 70% chance it will soon have a bear breakout. There is only a 30% chance of a successful bull breakout and then an even stronger bull trend. Once it breaks below the bull trend line, it will then typically have two legs sideways to down, lasting 10 or more bars (days). The 60 minute chart had a wedge rally over the past 24 hours, and the rally might be a lower high major trend reversal. Traders will be looking to for a sell setup. A good one would have about a 40% chance of a swing down. Other traders prefer high probability. They will wait for the bear breakout and then short. They will have a 60% chance of a profitable swing trade, but their stop will be further away. All trading is always a trade-off between probability and risk/reward. If one side has higher probability, the institution on the other side has better risk/reward. 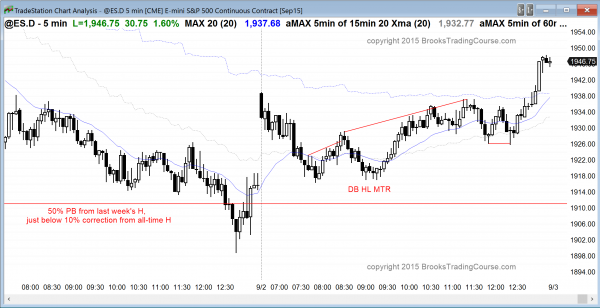 The Emini’s selloff yesterday was a test of the 10% correction from the all-time high and a 50% pullback from last week’s rally. Today’s reversal up was a 60 minute higher low major trend reversal. The bulls should be able to test between 2020 and 2050 this month, but since it is in the middle of a 2 week trading range, it could easily test down before it rallies. The strong close today and the good context make follow-through buying likely tomorrow. Friday’s unemployment report will determine if the Emini triggers the weekly buy signal by going above last week’s high, or instead continues more sideways. The odds are that there will be a bear rally to the targets within the next month, and then a test back down to last week’s lowest close.