The Emini reversed strongly up from below Friday’s low on the open. Although the bears want an opening reversal down from the 15 minute moving average and another lower high in their bear channel, the odds are that the reversal up was strong enough so that the 1st test down will be bought and that the Emini will have some kind of measured move up based. The best the bears can reasonably hope to get over the next hour is a trading range. The pullback might be deep.

The obvious measured move targets are a measured move based on the heights of the 1st 2 bull bodies, which is around the gap above Friday’s high, and a leg 1 – leg 2 measured move up. Since bulls will need a wide stop, they will have to trade small. The buying on the open was extreme. This increases the chances for a deeper pullback lasting many bars as the market tries to undue this extreme behavior. However, the bears need a series of consecutive bear bars closing on their lows or a break below the open before traders will believe that the bulls have lost control. Without that, traders will see any selloff as a pullback that will be followed by at least one more leg up.

Pre-Open Market Analysis
S&P 500 Emini: Learn how to trade the end of a pullback

The weekly chart had 6 consecutive bull trend bars with closes above their midpoints. This is strong enough momentum to make is likely that the first time that a week traded below the low of the prior week, bulls would buy the pullback. The pullback was likely to last only 1 – 2 weeks. This means that while this week might trade below last week’s low, next week probably will not trade below this week’s low. The odds are that the Emini will begin to test back up to the high of 2 weeks ago, and the rally should begin this week or next week.

If the Emini weekly chart instead gets 3 consecutive bear bars will closes near their lows, that would neutralize the momentum of the 6 week rally, and it would lower the probability of a test of the high of 2 weeks ago from 60% to 50%.

If the bulls get their rally this week or next, they hope to strongly get a breakout to a new all-time high. They then want a 350 point measured move up based on the height of the yearlong double bottom. Since the Emini monthly chart is so overbought, the bulls have a 40% chance of that happening. More likely, if they get a new all-time high, it will fail within about 5 bars on the monthly chart and be followed by a TBTL minimum reversal (Ten Bars, Two legs, so about a year on the monthly chart).

The bulls are looking for a rally off the 20 week EMA, which has been reliable support and resistance during the 6 year bull trend. A rally is likely this week or next.

The Emini is down about 1 point in the Globex market but it rallied 20 points off the overnight low. The selling on the 60 minute chart has been so strong that the bulls will probably need a double bottom over the next week or so before they can test the November high. This means that the first rally will probably be limited to a few days, and it will then probably be followed by a test back down to form.

Whether or not the first reversal up is followed by a test down, or whether the Emini tests down further, there is a 60% chance of a test back up to the November high at some point over the next few weeks. The market is in the process of deciding if it has tested down far enough.

The EURUSD is still in a 6 day tight trading range on the daily chart after a sell climax. The odds of a continued selloff to the April low without a pullback are about the same as they are for the pullback. Until there is a breakout up or down, traders will continue take 10 – 20 pip scalps.

The USDJPY 60 minute chart broke above a 5 day bull flag last night. The breakout was strong enough so that a 2nd leg up sideways to up is likely. It has sold off over the past hour. Bulls will look to buy a test down to support to 122.70 to 122.80, which was the bottom of the overnight bull channel, and it is around a 50% pullback. If they get a buy signal there, their minimum target would be the overnight high around 123.10, and they hope to get a leg 1 = leg 2 measured move up to the August high around 125.30. 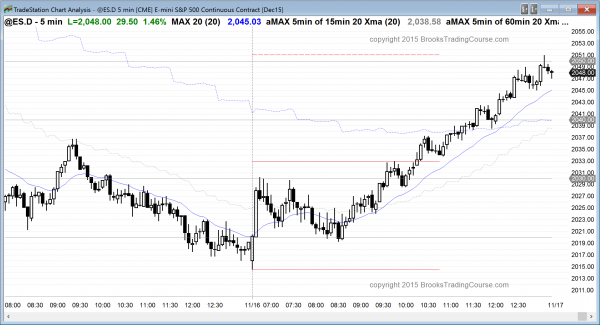 The Emini reversed up strongly on the open from below last week’s low. After a pullback, it entered a tight bull channel and formed a Spike and Channel bull trend day.

The Emini found buyers below last week’s low, as expected. Because last week’s selling was so strong, the bulls might need a micro double bottom before they are able to test the November high. Today’s reversal was so strong that the double bottom will probably be from a higher low. The Emini is probably in a trading range on the daily chart, as I have been saying for 2 weeks. Because today was a buy climax, there is a 75% chance of at least a couple of hours and 2 legs of sideways to down trading tomorrow starting within the 1st 2 hours. There is a 50% chance of follow-through buying in the 1st 1 – 2 hours.

The bears need another 2 consecutive big bear bars on the weekly chart to reduce the probability of a test back up to the November high. Although the Emini might go sideways for a couple of days, the odds are that the best the bears will get is a trading range on the 60 minute chart over the next week. More rally is likely, even if there is a little more selling first.