The bulls got a lower low major trend reversal on the open after a brief sell climax. The reversal up was not strong, and the bears created a double top bear flag and a triangle at the moving average. The day started in breakout mode, and both sides needed a breakout with follow-through, hoping for a measured move after the breakout.

At the moment, the Emini has been Always In Short since the open, but this is 60 bars into a bear trend, and the trend has been a broad bear channel for 30 bars. This increases the chances that the current selloff will end up as a bear leg in a trading range day.

There is no sign of a bottom yet, and the bear channel might continue for 2 to 3 hours before the bulls begin a swing up. Traders will continue to sell rallies until there is a clear bottom. Aggressive bulls have been buying new lows with wide stops and scaling in, but it is better to focus on shorts until there is a credible bottom or a strong bull breakout with follow-through.

Since this is a broad bear channel, the odds favor a swing up within the next hour or two. There is a chance that the bears can get a strong bear BO and then convert this into a strong bear trend, but the odds are against it.

The Globex market has been in a trading range overnight. Emini daytraders still expect at least one or two 4 point swings everyday, and there will almost certainly be at least one today. However, it can be in either direction, and neither side has an advantage.

Every time the Emini sells off strongly to the bottom of the trading range, traders on TV talk about the upcoming bear breakout. Every time it rallies strongly, they talk about the impending breakout to a new high. They will eventually be right, but traders learning how to trade the markets need to get accustomed to strong breakout attempts repeatedly failing when the Emini is in a trading range.

There will eventually be a breakout, and because the monthly chart is so overbought, the breakout will probably be within the next few months, but until there is a breakout, there is no breakout. Strong traders will continue to buy low, sell high, and scalp on the daily charts. The day trading tip is to look at each day as mostly unrelated to the prior days and be open to anything. 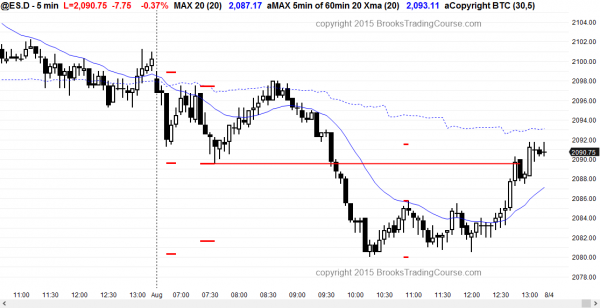 Although the Emini sold off strongly today, the bulls saw today as simply a 50% pullback from last week’s rally. The bulls got a double bottom higher low major trend reversal in the final hour and finished the day Always In Long. They hope to get follow-though buying tomorrow. The bears want the late rally to be another lower high in a bear channel. The bulls have higher probability, and the odds favor a 2nd leg sideways to up in the first 2 hours tomorrow.

The 240 minute chart had a series of gap bar in its rally last week. This is a sign that the bears are getting stronger (they were able to put several bars completely below the moving average. The rally that follows gap bars late in a bull trend often becomes the final rally before there is an attempt at a major trend reversal. There is no sign of a top yet on the 5 minute chart, and traders learning how to trade the markets should assume that the trend will continue until there is either a reliable top or a strong bear breakout. Those trading Forex markets for a living will be looking for a top soon. The rally on the daily chart that began in May is it its 3rd leg. A reversal would have a good chance of at least 10 bars (days) and 2 legs sideways to down. However, there is no sign of a top, and the bulls will keep buying until there is a top.