The bulls got a trend from the open bull trend, but the buying from Friday’s low is climactic and the odds favor profit taking. It should last at least a couple of hours and possibly all day. Although it is possible for this early trend to last all day, there is a 70% chance of at least 2 hours of sideways to down trading, and it typically starts by the end of the 1st hour or two. Day traders should look for a swing sell setup soon. The odds for a continued rally are small. If it happens, traders will buy for a swing up, but the odds of that are low and the focus should be on selling soon, and then on buying pullbacks, not buying near the top.

The Emini reversed up strongly from the bottom of its month long trading range. It is too early to know if the rally was caused mostly by bulls who will continue to buy and create a breakout to a new high. Will the rally lead to a resumption of the 6 year bull trend? The alternative is that the rally was caused mostly by bears who expected a downside breakout on Friday’s report. When they saw a rally instead, they bought back their shorts. Those bears do not want to be holding short at the bottom of a trading range when the market is reversing up. They are still expecting a bear breakout, but now believe that they might be able to sell much higher. They will watch the follow-through buying this week. Will it look like a new bull trend or a bull leg in a trading range? If they conclude that the bull reversal is weak and is just a leg in a trading range, they will sell again. I have been writing that the reversal up from the August low was so strong to make the chance of the first resumption down likely to fail. That is what happened on Friday. However, I also have been saying that I still think there is a 60% chance of a 2nd leg down and only a 40% chance of a new high without the 2nd leg down. The odds will go up for the bulls if they can continue to add more bars to the trading range.

The reversal was strong enough to make follow-through buying likely for a couple of days and maybe even a few weeks. Today will probably gap up. Resistance above is at the September double to around 1980, and then the September high of 2011.75. The bulls want Friday to be the end of the bear trend and the resumption of the bull trend on the daily chart. They need strong follow-through buying today and for several days to make their case strong. However, they still can will even if the Emini pauses or pulls back for a few days if they then create a series of big bull bars closing on their highs.

Unless the bulls clearly take control by creating a series of big bull trend bars and breaking above the September and the all-time highs, the odds are that the rally is just another leg in a trading range and that the follow-through buying will be disappointing.

The Globex is up 13 points and the day session will probably gap up, and trigger a buy signal on the weekly chart by going above last week’s high. The measured move target from last week’s 60 minute double bottom is around 1970, or about 14 points higher. Friday was strong and might have follow-through buying for an hour or two. Friday was a tight bull channel that lasted all day. That means that there is a 70% chance of at least two legs sideways to down and lasting at least a couple of hours today, and it should start in the 1st couple of hours. It might start on the open. The bulls will then look for trend resumption at the end of the day so that the day will be a strong follow-through day. The bears want the bulls to be disappointed, and they will try to prevent today from being a big bull bar closing on its high.

The EURUSD had a strong bull breakout on the 5 minute chart after Friday’ report, but then had an endless bear channel. The bear trend held above the bottom of the bull reversal and is still more likely a bull flag. The odd favor a test back up to Friday’s high unless the bear’s can break below Friday’s low. If so, then the odds will favor a measured move down based on the height of Friday’s bull reversal. The overnight rally tested close to Friday’s high and it might be the test the bulls expected. The selloff since then adds more confusion. When the market does confusing things (things where the probability for a move up is about the same as for a move down), it is in a trading range, and traders need more information. Those who trade Forex markets for a living believe that the 5 minute chart is now in a trading range, and that range is within a 7 month trading range. Until there is a strong breakout up or down, traders will continue to be quick to take profits. The result is that there will not be much follow-through and the Forex market will simply add more bars to the range.

The reversal down in the EURJPY was strong enough last night so that traders will initially look to sell rallies today. However, the selloff is simply a pullback on the 60 minute charts and the downside will probably be limited to a test of the higher lows in last week’s rally, and then a trading range will likely form.

The 4 day reversal down in the USDCAD is a pullback in a broad bull channel on the 60 minute chart, and the selling was climactic last night. Beginning traders who are learning how to trade the markets should look for a major trend reversal to buy for a swing up today or tomorrow. The target is the lower high in the middle of the 4 day bear channel, which is 150 pips above. 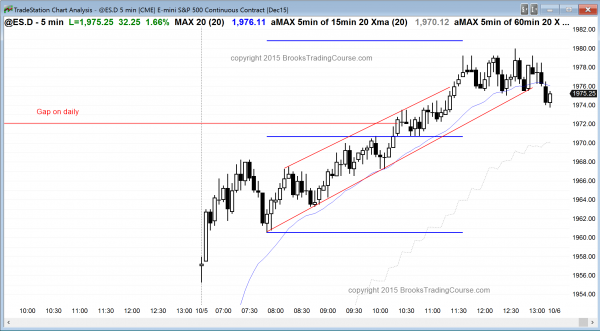 The Emini rallied in a tight bull channel after Friday’s strong rally.

Although the rally on the 5 minute chart was in a channel and had many reversal attempts, the day formed a strong follow-through bull trend bar on the daily chart. The bulls need more days like this if they are going to convince traders that this is a resumption of the 7 year bull trend and not simply a bull leg in a month long trading range.

Since the 60 minute chart has gone 13 bars without a pullback, it is in a buy climax and the odds are that there will be a pullback early tomorrow. However, the first selloff below a bull micro channel is usually bought and is followed by a new high. That new high is usually sold and a bigger pullback then often begins. While it is possible for the 60 minute chart to become more overbought, a transition into a trading range for a day or two is more likely.