The Emini rallied from an opening reversal. The reversal came from above the moving average, which is unusual and therefore lowers the probability that this will be a strong bull trend day. The rally was strong enough to make the Emini Always In Long.

However, this is the 4th day in a trading range where there have been many strong breakouts up and down that failed. This will make bulls quick to get out of longs if the rally begins to reverse. Bears will look for a parabolic wedge top. For example, if there are 3 consecutive bear bars closing near their lows, the rally could create an early high of the day. The rally is also parabolic and therefore climactic. This reduces the chances that this will be a big bull trend day.

Although the Emini is Always In Long and there are targets above, the buy climax increases the chances that the rally will fail and convert into a trading range, and possibly a bear trend. Traders will be quick to get out if this stalls, and they will be quick to short if it reverses. In the meantime, bulls keep buying, but the odds are that the upside is limited because of the buy climax.

The Emini was sideways overnight after 3 small, trading range days. There is an FOMC announcement today at 11 a.m., and the report typically results in a big move. Half of the time, there is a quick initial move that reverses. Once there is a clear move that has follow-through for at least one bar, there is still a 40% chance that it, too, will soon reverse. It is better to wait to enter until at least after the 2nd bar closes, and then only enter if there is a strong bar and then a 2nd bar with a close in the same direction.

The bars are often big so the stop is far and the time to make decisions always feels too small. If a trader learning how to trade the markets cannot comfortably use the appropriate stop and make decisions fast enough, and most cannot, it is perfectly reasonable to just sit back and watch the price action unfold. Use this as an opportunity to gain some experience. Those who trade the markets for a living have enough experience and will be prepared for abrupt reversals and big moves.

There are several magnets above. Friday’s Globex high of 2074.50 was a big buy climax, and therefore resistance. The next important resistance is the August 18 top of the bear trend at 2091.25 on the day session daily chart. The all-time high of 2117.00 is probably too far above to be reached today.

The daily chart is overbought and had a buy climax last week. About half of the time when there is a buy climax, there is a pause, like the Emini has had for 4 days, and then one more buy climax. That 2nd buy climax then is often followed by a TBTL (Ten Bar, Two Leg) correction that typically has a test of the bottom of one or both buy climaxes and the moving average as its minimum goals. With this in mind, there is probably a 60% chance of a pullback beginning either after the report, or after a 1 – 2 day rally that tests the top of the bear trend.

The EURUSD 60 minute chart is oversold and turned up from a higher low major trend reversal last night. The initial target for the bulls is the October 23 lower high around 1.1140, which is 60 pips above the current price. That is also at the bottom of the tight trading range from early October.

The bears want the 3 day rally to fail. They see 3 pushes up and hope that it is a wedge bear flag. Traders will probably wait for today’s 11 a.m. PST FOMC report before deciding between the 2 choices.

Financial markets usually enter trading ranges for at least an hour or two before the FOMC announcement. The 5 minute chart rallied overnight in a series buy climaxes in a tight channel. There was a big buy climax 5 minutes ago, and the EURUSD is testing the top of the overnight channel. It is more likely that it will pullback than it is that it will have a successful bull breakout above a bull channel. Because the climax was so big, it might be the final leg of the overnight rally. If so, a transition into a trading range today is more likely than a reversal into a bear trend, at least until the report.

The 60 minute chart of the USDCAD rallied more than 400 pips since last week when I said it was likely to rally. It has corrected more than 50% of the strong selloff of the first 2 weeks of October. The rally has been in a broad bull channel and it has had 4 legs up. When a fairly uniform channel has 3 – 4 pushes, the odds are at least 60% that it will test the bottom of the channel and correct for at least a couple of legs and about 10 bars.

On the 60 minute chart, 10 bars is about a day. It traded down for about 5 hours last night. More down is likely, but it might test up and then have a 2nd leg down. The target for the bears is support. Obvious support is at the most recent higher low around 1.3130. The next support is at the bottom of the strong bull breakout of October 23. That is around 1.3040.

The last leg up was strong enough so that the 60 minute chart might have one more brief high before the pullback begins, but the odds favor more of a pullback for at least a couple of days. The FOMC report today might be an excuse for one more push up. It is equally likely to be an excuse for a test down to support levels. 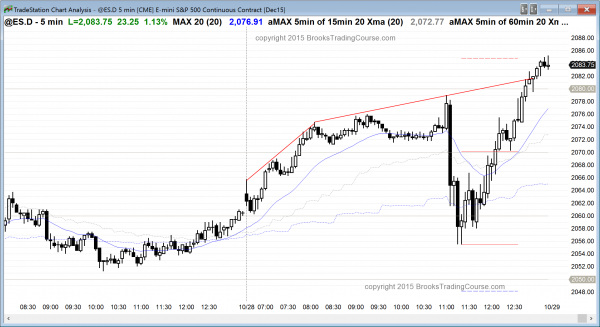 The Emini had an opening reversal up from above the moving average. The FOMC report was followed by a strong, brief reversal down. Bulls bought the 60 minute moving average and low of the day for reversal back up.

The Emini bears failed after the FOMC report. The Emini is close enough to the August top of the bear trend at 2091.25 that it might not be able to escape its magnetic pull. Although the daily and 60 minute charts are overbought and the odds favor a pullback within the next few days, the Emini might have to get above that target before traders will take profits and create the pullback. Today’s price action is good for the bulls because of the strong reversal up, and it is good for the bears because it made an overbought market even more overbought. Traders will be watching for a setup that could lead to a 1 – 10 day pullback. Until then, the bulls are still in control.