Yesterday had a reasonable bottom attempt before the collapse into the close. There were theoretical scale in bulls who were buying near yesterday’s low, expecting a test back up to that trading range, just above the 60 minute moving average. The bears needed a strong breakout below yesterday’s low to make the bulls give up. They wanted at least a measured move down, based on the height of the bear flag that began at the end of yesterday.

The bulls needed a strong reversal up from around yesterday’s low to make the bears give up. They wanted a bull breakout above the bear flag and a measured move up to yesterday’s bottom attempt, above the 60 minute moving average. Even if the bears were to succeed and get their measured move down, the bulls would again look to buy a reversal up after a sell climax and a possible final bear flag. The odds still favor at least a 2 hour sideways to up move.

At the moment, the bulls are getting their breakout and the Emini is Always In Long. The minimum target is a test of yesterday’s final bear flag. The bulls might even test the Globex high. The bears want this breakout attempt to fail and for the Emini to reverse down to a new low. The bulls need follow-through buying if today is to be a bull trend day. Otherwise, this rally will end up as a bull leg in trading range.

Pre-Open Market Analysis
S&P 500 Emini: Learn how to trade futures when there are climactic reversals

I have been writing for a couple of weeks about the candlestick pattern on the daily chart. The Emini is in a bear trend and any rally is a bear flag. What traders do not know is if the next leg down would begin from a double top bear flag with the August 27 high, or from a test of the bottom of the 7 month trading range in the 2050 area. Yesterday reversed down strongly from the August 27 high and it was a possible resumption of the bear trend. Until it breaks strongly below the September 1st neckline of the double top, it is still in a trading range and it still has about a 50% chance of breaking above the August 27 high and reaching the 2050 area.

When the market is in a trading range, it has many strong moves that look like they are the start of a breakout. Friday’s rally and yesterday’s selloff are examples. Until there is a breakout, there is no breakout, and each of these strong trends on the 5 minute chart are just legs within the trading range on the daily chart.

Yesterday was a strong bear trend day, and the Globex Emini is down about 12 points. It might gap down on the open. Look at the daily chart over the past 3 weeks. There have been many gaps up and down, which is typical in a trading range. Until there is a strong breakout with follow-through, these strong moves up and down will all probably fail. Look at the huge selloffs of August 24 and 25. Both failed and were followed by strong reversals up (which also failed).

There might be follow-through selling today or tomorrow for a test of the neckline of the double top at around 1890. Without a strong breakout below the neckline, the double top will be followed by a double bottom at 1890 and the trading range will continue.

Online day traders should have no expectations going into the day, and they should assume that any follow-through up or down will be limited, and that reversals are much more common than breakouts when the Emini having trading range price action. Because the sell climax lasted several hours yesterday, there might be follow-through selling for the first hour or two today, but there is a 75% chance of at least a 2 hour move sideways to up.

Each major Forex cross remains in its 3 week trading range, and are still therefore in breakout mode. This means that day traders expect a move of hundreds of pips soon, but the bulls and bears are in balance and no one knows whether the breakout will be up or down. Those who trade Forex markets for a living know that each leg up or down within the trading range might be the start of the trend, but the odds of any one of these breakout attempts succeeding are small. They therefore expect strong moves up or down to last only a day or so and then reverse.

When there is a trading range and it has a strong move up or down, the swing can often go beyond the range before it reveres, and it often goes further than what might seem likely. Because of this, traders learning how to trade the markets should be patient and not take the first reversal. When a move is strong and a trader is looking to enter on a reversal, the math is better if a day trader waits for a 2nd entry. Sometimes the 2nd signal is not reliable. When that is a case, the trader looks to enter early in the reversal once he sees that it is strong.

For example,look at the overnight 5 minute chart of the USDJPY. There was a strong rally 3 hours ago the abruptly stopped after going a few pips above the high of 4 hours earlier. There was no clear sell candlestick pattern. However, there has been a bear breakout over the past 20 minutes. That breakout is a sign that traders agree that the rally has ended and that the bulls are giving up and that the bears are shorting. The rally is probably strong enough for at least one more leg down after a pullback.

Is it the start of a bear trend? Maybe on the 5 minute chart, but it is just a leg within the 3 week trading range and it is not likely to go far before the bears take profits and then wait to sell higher. Also, the bulls know that the trend down will fail, and they will look to buy the reversal up. Bulls and bears are buying low, selling high, and scalping, and that type of mentality creates the trading range.

Since the trading range has lasted long time, it will probably end with a breakout soon. The minimum target is a measured move that is based on the height of the range. For most markets that is about 200 pips. The move can go much further, but that is the minimum that traders expect. The initial breakout has a 50% chance of leading to a trend and a 50% chance of reversing and leading to an opposite trend. 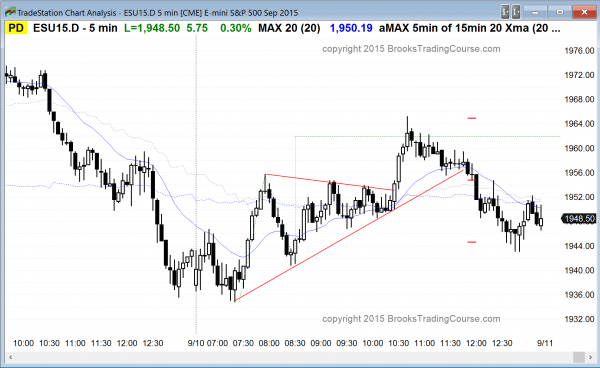 The Emini reversed up from below yesterday’s low, but the 1st pullback was deep, increasing the chances of a trading range day. There was a 2nd leg trap on the breakout above the midday triangle and it was followed by a pullback into the triangle.

Although today rallied for most of the day, it closed in the middle and it did not reverse much of yesterday’s bear trend. The 60 minute chart is in the middle of the 3 week trading range and day traders need to be open to anything tomorrow. It is Friday, and the nearest weekly target is the open of the week, which was near today’s close. The daily chart is still forming a bear flag. There is still 50% chance of a rally to the 2050 bottom of the 7 month trading range before a test of the October low.