The Emini continued its broad bear channel from yesterday, but a broad channel with a wedge shape has about a 75% chance of a bull breakout. The bull breakout can be followed by a trading range or a swing up.

There is a 25% chance of a strong bear breakout and then a measured move down. Although the Emini is Always In Short, the selling is weak. Day traders will be looking for a bottom and a reversal up. The target for the bulls is the top of the wedge, which is at the 60 minute moving average. Bulls should wait for a strong bottom or for a strong bull breakout with follow-through.

Bears are selling above bars, betting that each reversal up will fail and become a bear flag. They are right, but they know the odds are that there will be a swing up staring in the next hour or two.

Although the bear channel can continue all day, it is more likely that there will be a swing up soon.

Pre-Open Market Analysis
S&P 500 Emini: Learn how to trade the markets when the price action is sideways

Today is Friday and the week’s range has been small, despite the big range on Wednesday. The nearest weekly magnets are the open and low of the week (which was yesterday’s low). The Emini is also in the middle of a 3 week trading range, digesting the huge bear breakout that came last month. The odds are that today will have more trading range price action. Despite the trading range price action, the daily ranges have still been about 30 points, and the legs within the trading ranges have been big enough for swing trades. Today will also probably have at least one swing trade of 10 or more points,and the day trading tip is to try to hold for more than a 4 point swing once a swing trade becomes clear. There will also probably be a lot of high probability trading for scalpers, but much of it will be with limit orders and scaling in. Most traders should not do that because it requires quick decisions and careful management, and this makes it too easy to lose money.

Nothing has changed regarding what will happen over the next several months. The daily chart is in a bear trend, and the current bear flag will either turn down from this week’s double top, or, more likely, there will be a breakout above the double top and the next leg down will come from a higher low. There is about a 50% chance of a move below the October low. What is not known is the path. The Emini could still rally to around 2050 before the bear trend resumes.

The monthly chart is still in a strong bull trend. Even if the Emini falls 20%, this would still only be a bull flag on the monthly chart. While it is possible that the current selloff could reach the breakout point above the 2000 and 2007 double top, it is more likely that there will be at least one more new high before the double top is tested.

All of the major Forex crosses remain in the tight trading ranges of the past 3 weeks, and day traders continue to look for Forex scalps, but hope for Forex swing trades. They are buying below each minor low or the close of each strong bear bar near the bottom of the range, and they are selling above each prior high and each strong bull trend bar near the top of the range. If the Forex market reaches a 10 – 20 pip scalp, they take profits. It the Forex market goes against them 10 – 20 pips, the add to their position. They might use a 30 – 50 pip stop. If they scale in, they get out breakeven on the trade at the midpoint of their 2 entries is the breakout against them was very strong. If the Forex breakout was not too strong, they get out at their first entry at breakeven and with a profit on their 2nd. If there was a strong reversal after their 2nd entry, they often hold for a profit from both Forex entries.

One of the Forex crosses with the best potential for a swing trade on the daily chart is the USDCAD. It has been in a triangle for several weeks just above the moving average and in a strong bull trend. It had a wedge top, but instead of reversing, it corrected by going sideways in a triangle. A triangle is a bull flag, and when it forms late in a bull trend, it is more likely to be the final bull flag before a bigger correction develops than it is to be a spring board to a new, strong swing up. It is an area of agreement. If the USDCAD breaks above it, even strongly above it, the odds are that the breakout will fail within 5 – 10 bars (days) and that the Forex cross will reverse. The minimum target is a test of the apex of the triangle, but there is about a 50% chance of a breakout below the triangle and then a measured move down based on the height of the triangle.

The bulls expect at least a measured move up from the triangle. Since the triangle is 200 pips tall, they will look to take partial or full profits around 200 pips above their entry.

If there is a bull breakout and then a reversal down, the bears will also look to make at least 200 pips. If the USDCAD breaks below the triangle, they might make 200 pips more.

Although a triangle in a bull trend is a bull flag, it is also an area of intense agreement and balance. This means that the Forex market can only be in a triangle if the bears are about as strong as the bulls. The bears then have almost a high a probability of a bear breakout as the bulls have of a bull breakout. Those who trade Forex markets for a living will be ready to short if there is a bear breakout below a bull flag.

Traders learning how to trade the markets have a reasonable chance of a swing trade soon. The breakout might be in either direction, and they should be ready to enter in the direction of the breakout. About 50% of triangle breakouts fail within a few bars. If a breakout it weak and begins to reverse, traders should look for a swing trade in the opposite direction. 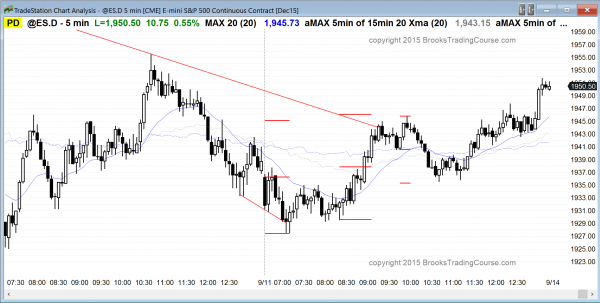 After a wedge bottom, the Emini rallied and formed a trending trading range day. After a midday higher low major trend reversal, it rallied to close on its high.

The Emini rallied from a wedge bottom and formed a trending trading range day. It closed near the open of the week and the candlestick pattern on the weekly chart was a doji bar. Although the Emini has been sideways for 3 weeks, and it turned down from a double top bear flag on the daily chart this week, it is still in its trading range and the probability of a test of the 2050 bottom of the 7 month trading range is around 50%. Whether or not the Emini gets there, it is still in a bear trend and it has at least a 50% chance of testing the October low. This sideways price action is the market deciding when to begin the next leg down, and where the top of the bear flag will be. The chance that the bull will resume without a 2nd leg down is probably less than 40% at the moment.