The probability usually remains low until there is a strong breakout up or down, with strong follow-through. Since this open is increasing the chances for a lot of trading range price action today, day traders are expecting to scalp until the price action changes. The change would come from a strong breakout up or down. Until then, traders will buy low, sell high and scalp.

At the moment, the Emini turned down from a lower high major trend reversal after trying to test yesterday’s high. However, it has not yet broken below the low of the day, and is still in a triangle. Until there is a breakout, there is no breakout. Because there has been so much trading range price action, the breakout up or down will probably only last for a few bars and the market will then enter another trading range. This means that today will probably become some kind of trading range day, like a trending trading range day, a broad channel for a few hours that reverses, or simply a trading range day. However, there is always the chance of a surprise and a big trend day up or down. The odds are against it at the moment.

Pre-Open Market Analysis
S&P 500 Emini: Learn how to trade the markets when the price action is unclear

The Emini has been in a trading range on the 60 minute chart since the 2 day buy climax ended on Monday. The leg up of the past 2 days might continue to day. It might even have a bull breakout and then an acceleration of the rally on the daily chart. More likely, it will test down because the channel up this week is more likely a bull leg in a week long trading range that began on Tuesday than a bull channel that has a lot further to go before a trading range begins.

Since the daily chart is in a bear trend, beginning traders who are learning how to trade the markets should realize that the chance that this current strong rally is a reversal is 40%. There is a 60% chance that it is a bull leg in a 2 month trading range and that it will be followed by another leg down on the daily chart. If the bulls can continue to add bars to the trading range, the strong bear breakout in August will fade further to the left on the chart and have less influence on the future. At some point, the probability of a 2nd leg down will drop to about 50%, and the daily chart will then be in breakout mode, where the probability for the bulls has risen to equal that for the bears.

Until that happens, or unless the bulls get their strong breakout over the next couple of weeks, the odds still favor the bears, and it is only a matter of waiting for the bulls to give up. If they do, since they are so strongly convinced that the bottom is in, they will be very quick to get out of their big positions. They have not been scalping during this rally. They believe the bottom is in and that the year end rally has begun. This creates the potential for a big surprise, which means a big bear breakout.

When there is a surprise (an event that many traders see as unlikely), it traps bulls in and bears out. Both then wait for the first pullback to sell. The bulls want a pullback to get out with a smaller loss. The bears who did not sell the breakout want a pullback that will allow them to short. This means that if there is a 2nd leg down from the August bear breakout, the 2nd leg will probably subdivide into 2 smaller legs. The result will be 3 pushes down, and a possible wedge bottom 2 or 3 months later.

The Globex chart overnight has been sideways after 3 sideways days. This increases the chances of more trading range price action today. The 60 minute chart might have a 3rd push up to test the resistance around 2,000, or it might begin a bear leg to test this week’s trading range without having the 3rd push up.

Whenever the probabilities are not high, those who trade the markets for a living know that the market is in a trading range. The bulls need persistent strength to convince traders that the rally is a bull trend reversal. If they do not get it over the next few days, they will be disappointed and sell out of part of their longs, creating a pullback on the daily chart, and a bear leg in the trading range. Disappointing follow-through after a strong leg up or down is another hallmark of a trading range, and the probability is against the bulls unless they provide more evidence that they have taken control of the daily chart.

The EURUSD and USDJPY remain in extremely tight trading ranges on the daily charts. Day traders have been mostly scalping for 10 – 30 pips, and many of the 10 pip scalps are with limit orders and scaling in.

The most interesting chart is still the USDCAD because it has had 5 strong days down to the bottom of a 3 month trading range. The probability is that it will bounce at the bottom of a range. Also, the selloff on the 60 minute chart has been in a tight bear channel that has lasted over 100 bars. When that happens, it is unsustainable, and therefore a type of sell climax. When there is a sell climax, the stop for the bears is far above. This means the risk is high. The computers need to reduce risk. They do this buy reducing the position size, which means they buy back part of their shorts. This usually results in a couple of legs sideways to up. The first leg up formed yesterday.

Day traders will decide today and tomorrow if the 2nd leg will be sideways or up. If it is sideways, the bulls are not strong. This would increase the chances of a bear breakout below the range. Since most trading range breakouts fail, the odds are that this one will fail as well, and at least bounce to resistance. There is always resistance in the middle of a trading range.

This creates the possibility of a rally to the middle of the range, which is 150 – 200 pips above the current price. The bulls want a major trend reversal on the 60 minute chart and then a rally. The day trading tip is to look for a candlestick pattern that is a buy setup today or tomorrow to enter early on a possible swing up for one to three days.

A reversal often happens in the absence of a clear candlestick pattern. When it does, it comes in the form of a strong breakout. Day traders who are waiting for a great short-term bottom for a bounce should be prepared for a strong bull breakout without a clear candlestick pattern. If the breakout comes, day traders should be prepared to buy as the reversal up is unfolding.

There is always a bear case, especially when the selloff has been as strong as this one has on the 60 minute chart. It is possible that the selloff will go much lower before there is a pullback. Because it is at the bottom of the 3 month trading range, it is more likely a sell vacuum test of the support at the bottom of the range than the start of a successful bear breakout. There is maybe a 30% chance that the bears will win, and that this selloff will break strongly below the trading range without pulling back for many more days. If that is the case, and if the bears get a huge bear breakout, traders should not be in denial. They should short. The probability, however, favors a bounce for at least 2 – 3 days. 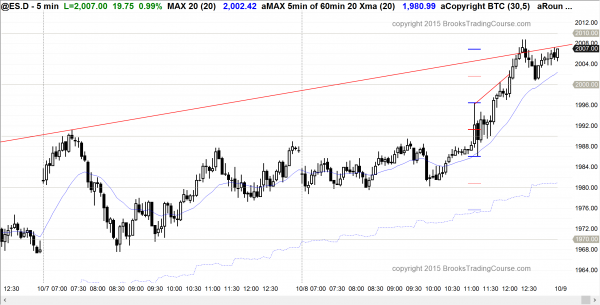 The Emini was in a trading range until the FOMC report at 11 a.m. It then broke strongly to the upside and tested the weekly moving average.

If they get it, and especially if next week is also a strong bull trend bar on the weekly chart, they will have reversed the bear trend on the daily chart, and the odds will shift in favor of the bulls. If they fail, the bears will look to turn the Emini down from a double top with the September high. Tomorrow’s close will give an indication of what we will see over the next few weeks.