Because the buying has been climactic and is pausing at the moving average, and the Emini has had a lot of trading range price action for two days, the Emini might enter a trading range or test down deeper than the bulls want. However, the odds are that there will be buyers. The bulls have about a 50% chance of rallying above yesterday’s high and forming an outside up day. There is also a chance of a huge bull breakout above September’s high, but this is not likely.

The bears would need a trading range and then a major trend reversal, or a wedge top, or parabolic wedge top with a reversal down to take control. Unless they get any of those, bulls will continue to buy and today will be some kind of bull trend day. The buy climax and the two trading range days increase the chances of a trading range starting soon.

Pre-Open Market Analysis
S&P 500 Emini: Learn how to trade the markets in a pullback

At the end of yesterday, there was a 60% chance of two things happening over the next few days. The Emini was likely to trade above yesterday’s high and below yesterday’s low. Since the Emini has gone 6 days without a pullback, the rally is strong. The first pullback below the low of the prior day will be bought, but the pullback might last 1 – 3 days. Because the rally was climactic and stopped at resistance, and the past 2 days were small and therefore represent exhaustion, the odds are that a breakout above their highs will be sold. The first breakout attempt will likely fail. A High 1 pullback (a 1 – 3 day bull flag) at resistance and after a buy climax is a low probability buy setup, which means that there are usually more sellers than buys above the buy signal bar.

With the Globex session down 10 points, the Emini will probably trade below yesterday’s low. This would create the 1st pullback in 7 days, and it probably will be bought before the end of the week. This usually means that one of the days will trade above the high of the prior day. For example, if today’s high is below yesterday’s high and today’s low is below yesterday’s low, today will be a buy signal bar. It will attract more buyers tomorrow if today closes above its open and near its high. However,the odds are that if tomorrow trades above today’s high, the rally will last only a day or two and the Emini will try to pull back again. This would create a micro double top, and it could lead to a deeper pullback. That deeper pullback, even if it lasts a couple of weeks, will also be bought. At that point, the bears would have enough bars for a credible major trend reversal, and they might then take control of the market, and the August bear trend might then have a 2nd leg down to below last October’s low.

The bulls hope that the deeper pullback will attract enough buying to recover the momentum of the past few weeks and propel the market strongly above the September high for a test of the 2030 – 2050 bottom of the 7 month trading range and then the all-time high. The rally has been strong enough to raise the probability for the bull case from 40% to 50%. That means that there is still a 50% chance that this rally is a trap and just a double top with the September high, even if it goes 50 points above that high. If it turned down from that level, it would be an expanding triangle, which is a type of major trend reversal.

If the Emini trades down for 1 – 3 days, the downside targets are higher lows in the rally. The levels are around 2000, 1971, 1960, and possibly 1938, which is the breakout point above the October 1 and 2 double top. If the Emini falls that far, it will probably have to have a micro double top first, which means that the buyers this week would take the market back up to the September high at some point over the next several days, and the bulls would have to fail there a 2nd time.

No matter what happens, the odds are that the first pullback will last only 1 – 3 days and be bought, and traders learning how to trade the markets should understand that the next leg up will be brief and be sold.

By the way, even though the Emini rallies slightly above the September high, the cash index did not. Those who trade the markets for a living see this as a minor sign of weakness for the bulls and strength for the bears.

The EURUSD has been in a weak rally for 3 weeks within its tight trading range on the daily chart. It is testing the September 8 lower high. The bears want a double top lower high and a reversal down. The bulls want a breakout and a test of the August high, which is the top of the 7 month trading range. Since most attempts to break out of a trading range fail, the odds are that this one will as well, and that the EURUSD will trade down again, beginning this week. This is especially true because the 60 minute chart is in a broad bull channel, which is the weakest form of bull trend.

The bulls do not yet have enough momentum to make traders believe that the rally is the start of a bull trend instead of just another bull leg within the trading range. The bulls can get a strong breakout at any time, but until traders see it, they know the odds are that the EURUSD will reverse down this week and begin a bear leg in the trading range.

The USDCAD began its oversold bounce yesterday. It broke well above the top of the 60 minute tight bear channel. The breakout was strong enough to make traders look for a 2nd leg up after the first attempt by the bears to resume the bear trend. This means that the bulls will probably be able to form a higher low major trend reversal buy setup this week. They will buy a pullback to a higher low (or, to a lower low, if the bears are able to create one). A major trend reversal has a 40% chance of a swing trade back up, creating a strong 2nd leg up. There is a 60% chance of either a small profit or loss for the bulls who buy the reversal up from a higher low.

The bears see this rally as a double top bear flag with the October 8 high on the 60 minute chart. Since the selling was so climactic, the odds are that there will be a 2nd leg in the correction up. That 2nd leg can be up, giving the bulls a swing trade, or sideways, creating a big triangle. It is too early to know which will form, but the odds are that there will be a test down and then an attempt at a 2nd leg up this week.

The bulls want a breakout above the double top and then a measured move up. If they get their buy setup, they then have a 40% chance of the head and shoulders bottom leading to a measured move up. Since the reward is several times greater than the risk, it more than offsets the low probability. This makes the trade mathematically sound.

The 1st leg up is still unfolding and there is no sign of a top yet. Bulls are continuing to hold long, but they will soon reduce their position size because the stop is getting too far away. When they do, their selling and the selling by the double top bears will probably result in a pullback later this week. 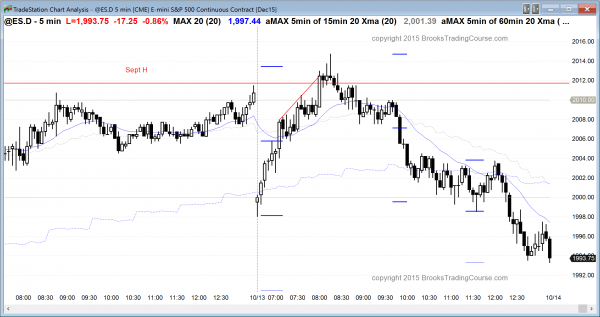 Coming into the day, there were two things that were likely to happen this week. The odds favored a move below yesterday’s low and a move above yesterday’s high. Either could come first. Both came today.

The Emini is still stalled at the September high and it might need to pull back for a week or two before the bulls will make another attempt to break above it and test the bottom of the 7 month trading range. The bears want either a double top here, or an expanding triangle bear flag at the bottom of the trading range, and then a 2nd leg down from the August bear trend.

The Emini has had 3 trading range days since its buy climax that tested the September high. There is no sign yet that the pullback from the exhaustion has ended. This means that the trading range of the past few days will probably last a little longer. The odds are that the first attempt down will be bought, as it was today. At the moment, the odds are that the Emini will get above the September high and test the 2030 – 2050 area before the strong bears will consider coming back. If and when they do, the overconfident bulls might be shocked by how quickly the market falls. No sign of this yet.