The Emini rallied on the open, but the bull bars were followed by bear bars, and bear scalpers made money selling above the high of the prior bar. This more often happens when a rally is a bull leg in a trading range, and less often when it is the start of a strong bull trend. This means that this opening rally will probably soon go sideways to down. The bears want a parabolic wedge top and high of the day, but until there is both a reversal down and a strong bear breakout with follow-through, the best the bears will probably get is a trading range.

The bulls have targets around 2,000 and hope to get there with this rally. However, it is more likely not strong enough, and the bulls will likely give up soon. If they do, this rally will end up as a bull leg in a trading range or an opening reversal high of the day. The Emini is Always In Long, but it is better to buy pullbacks until there is a strong bull breakout with follow-through. The bears will try to create a top for a swing down, but because the bull channel is so tight, it might take more than an hour of sideways trading before the bears can get a strong bear breakout with follow-through. If they get it, they then might get a selloff back to the open of the day or lower.

The Emini now has strongly committed bulls who believe the reversal is comparable to the one from last October. The bears are already strongly committed. This is a very interesting situation and it creates the possibility of a very quick, big move in either direction. One side is wrong and will be very quick to admit it. The exit by the heavily committed losing side might cause a big breakout. Since the trading range on the daily chart is 150 points tall, the move could easily be 150 points up or down, and most of it could come over the course of just a week or so. Not only will the losing side exit, many will reverse. Plus the winning side will add to its position.

This is not a usual situation, More commonly, when there is a trading range after a breakout and the market is choosing between trend resumption down and trend reversal up, the new trend is more gradual. The current trading range has very big legs and that is a sign of much more emotion and commitment, and it increases the chances that the breakout will begin quickly and it will be big and fast. If instead the trading range continues to fail to breakout for 20 – 50 more bars, traders will begin to reduce their position sizes and scalp more. The bars will get smaller and the breakout will be slower and probably not go as far. Until then, the potential for a big, fast move is greater than it typically is in a trading range after a bear breakout.

The current rally is testing the top of the trading range. The bears want the reversal to come from a lower high (below the September high). If the Emini goes above the high and then reverses, the candlestick pattern would be an expanding triangle bear flag with the August 28 and September 17 highs. The bulls need a strong breakout above the September 17 high and strong follow-through to convince the bears that the bull trend has begun. If the bulls in fact are winning, they can best demonstrate their strength by creating a relentless rally, like they did last October. Since this bear trend was significantly stronger than last year’s, the odds are that the rally will be significantly less, and it will be less clear. However, those who trade the market for a living never question anything, If the market is going up, they buy. If it is going down, they sell.

The 60 minute buy climax was followed by 2 sideways days, and the bulls begun trend resumption up last night. However, the overnight rally might still be part of a bigger trading range after the bull breakout ended on Tuesday. The market should tell us today. If today rallies strongly, then the bull trend has resumed. Friday was a big day, and big day’s often lead to measured moves. A measured move up would end around 2,000, which is a psychological magnet, and still below the September high. In the 60 minute Globex chart, traders learning how to trade the markets can see the breakout on Friday. The space between the trading range high and the first pullback is a potential measuring gap, and it projects to around 2,000. This is a magnet for this rally. The market gets drawn to magnets and then decides if it will break through them or reverse. This means that 2,000 is important over the next few days, and the market’s price action there will give day traders information about which side will win on the daily chart.

The Globex is up 12 points and around yesterday’s high. It might have a small gap up, but that is not important. The most important thing is 2,000, and it looks like the Emini will get there soon. Since there was such an unusually strong buy climax on Friday, the Emini might be exhausted. Yesterday was a rest day, but it might not have been enough to make the bulls willing to buy strongly again today. The odds are that today will not be a strong bull trend day because of the exhaustive buy climax, and because the target is only 15 points higher. The Emini could break strongly above the resistance and have a surprisingly strong day, and this could be a duplication of last October. The odds of that are 40%. The bears still have a 60% chance of winning, and this means that they bulls will probably be disappointed within the next few days, and there will probably be a deeper pullback than they think is possible.

Is the breakout up or down imminent? Trading ranges always look like they are about to break out, but 80% of the attempts fail. This one probably will as well, and it is more likely that the trading range will continue indefinitely. However, with the bulls and bears as heavily committed as they are, the breakout might come soon.

If today rallies, it will try to test 2,000. Since the buy climax is so recent, the rally will probably not be strong. If the Emini sells off without testing 2,000, the magnet will still pull on the market, and the selloff will probably be limited to a bear leg in a trading range after the big bull breakout that ended on Monday. The odds are for mostly trading range price action again.

The EURUSD and USDJPY are still in 150 pip trading ranges, and traders are buying low, selling high, and taking quick profits. There will be a breakout and it will last hundreds of pips, but until there is a breakout, day traders will bet that the reversal will continue and they will be quick to take profits.

The most interesting Forex cross is the USDCAD. It is at the bottom of a buy climax. If it reverses up from here, it would be an expanding triangle bottom with the August 31 and September 18 lows. The first target is yesterday’s lower high around 1.3130, then a 50% correction at around 1.3200. Traders will be looking to buy a reversal up today or tomorrow for a 150 – 200 pip swing trade. If there is no credible candlestick pattern, but instead the market begins to rally strongly, they will buy the bull breakout. Because the 60 minute chart is in a bear trend, it could fall much further from here, but since the current selloff is in a very tight channel and it has lasted about 100 bars, the odds are that the bulls will get a bounce soon. 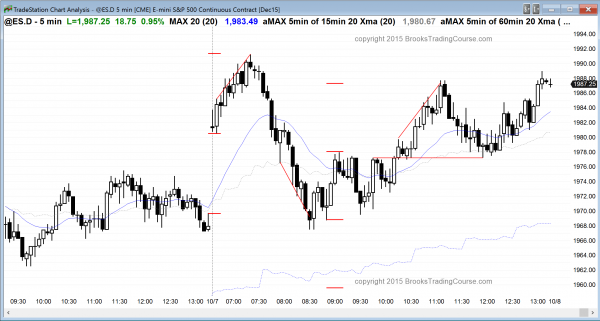 The Emini had a weak rally on the open and then a swing down to yesterday’s close. After a higher low major trend reversal, it rallied back above the open of the day to create a trading range day.

As was likely, today was a trading range day. The Emini is waiting for Friday to decide how the buy entry bar on the weekly chart should appear. The bulls want a big bull bar that closes on its high, and the bears want a bear bar.

The buy climax on the 60 minute chart was so extreme that then Emini could go sideways again tomorrow and even on Friday before it tries for one more leg up. Regardless of what it does for the rest of the week, the daily chart is still in a triangle in a bear trend, and any rally is more likely a bull leg in the trading range than the start of a year end rally, regardless of what they say on TV.