The Emini had a big gap down, but reversed up again from the December high. Although the first several bars had bull bodies, they had prominent tails on top, which is a sign of a lack of conviction. When the market opens with a big gap and the reversal is not strong, it usually is limited in its reversal and instead begins to go sideways until it is closer to the moving average. At that point, it then decides between a trend up or down.

The bears hope that the reversal down from below yesterday’s low is a bear opening reversal, but it follows 3 bull bars. This makes an early trading range likely. Traders will wait for a breakout up or down before they are willing to swing trade.

Although the series of consecutive bull bars on the open made the Emini always in long, the tails on the tops of the bars increase the chance that it will soon enter a small trading range. The Emini has had trading ranges during the first hour of most days over the past month and it looks like it will do it again today. This will put the market in breakout mode.

The 60 minute chart remains in a tight trading range and in breakout mode. This follows a buy climax to an all-time high. Anytime there is a buy climax, traders who are learning how to trade the markets must be ready for a possible trend reversal, especially when the climax forms at a new all-time high. The market usually enters a tight trading range for 10 or more bars, which it has on the daily chart. Within that range, there is always a buy setup and a sell setup. About 40% of the time, there is a swing down, which usually is a leg within  developing large trading range. That trading range is just a pullback on the higher time frames. Here, it would be a bull flag on the monthly chart, even if the Emini fell 20% or 400 points this year.

Despite the big moves in bonds, gold, and the Forex markets after today’s unemployment report, the Emini moved only a little initially, but sold off about 10 minute after the strong report. The Emini is looking for an excuse to do what it already knows it will do…sell off. The monthly chart is climactic, and it is only a matter of time before institutions agree that it has probed too far up.

The Emini has had several strong bear breakouts this week after triggering a sell signal on the weekly chart. This week’s candle is the entry bar for the short, and bulls and bears are interested in its appearance at the end of the week (today’s close). With a big gap down today likely, there is an increased chance of a trend day. Since today is the end of an entry bar on the weekly chart, there is an increased chance of a big swing up or down in the final hour or two. 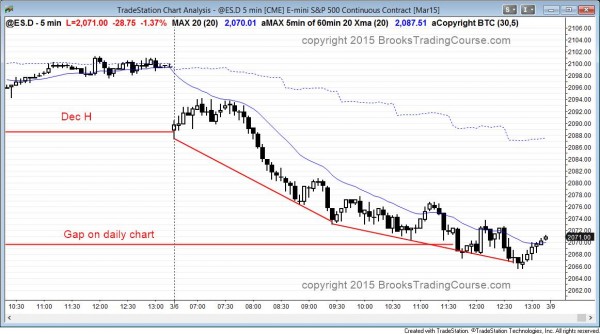 The Emini tried to hold above the December high, but the sold off strongly and closed the gap on the daily chart. This created a strong entry bar on the weekly chart for the short below last week’s low.

The Emini sold off strongly today. When the Emini sells off in a tight channel, there is a 70% chance of a rally on the next day having at least 2 legs and lasting a couple of hours. However, there is often some follow-through selling first.