The Emini opened above yesterday’s high and formed an island bottom on the daily chart. It also went above the top of the gap (Friday’s low), but turned down. After 4 consecutive bear bars and a buy climax test of resistance, the Emini became Always In Short. However, the bull channel from yesterday’s low was tight, and that makes an early trading range more likely than a trend from the open bear trend.

The bulls created a good buy signal bar just above the bottom of the gap. This was an opening reversal buy signal and it is the possible low of the day. When both the bulls and bears have reasonable signals, a trading range is likely. If the Emini rallies from here, the rally will probably be limited to an hour or two, and it will then probably enter a trading range. The Emini is in a buy climax and near resistance, and the daily chart is probably in a big trading range so follow-through should be disappointing.

The opposite is true of a selloff. The sell off will probably be a bear leg in a trading range because the bull channel is so tight. The bears will probably need a major trend reversal, and that usually takes at least an hour or two to develop.

For the past year, I have been writing that there would be at least a 10% correction that would create a bear trend on the daily chart and a pullback in the bull trend on the monthly chart. The price action is consistent with that.

The double bottom on the 240 minute chart might lead to a measured move up to the bottom of the 7 month trading range in the 2040 area, but the odds are that it will be a bull leg in a trading range and that is will be followed by a test down. While the odds are that the bottom of the pullback is in for many stocks, like JPM and SBUX, the rally in the overall market will probably have to test back down within a month or two. This means that the Emini will probably be sideways for a few months, even though it is trying to rally up to resistance now. The daily moving average is currently just above 2020, and that is also resistance.

Since a trading range is likely on the daily chart, bulls and bears will be disappointed by the follow-through after big days. When traders begin to get hopeful that a trend is beginning, it is more likely that it will soon reverse for several days. The market is bullish from August 30 to September 5, and the rally might already be underway. However, the rally is probably a bull leg in what will turn out to be a trading range.

The Emini might close Monday’s gap down today. If so, the gap might lead to a measured move up from the low or from Tuesday’s low, which is the bottom of the 60 minute double bottom higher low major trend reversal.

Yesterday’s rally was strong, but climactic. There might be follow-through buying for the first hour or two, but the odds are that there will be at least a couple of hours of sideways to down trading. The Emini is at the 60 minute moving average, and the 60 minute bears have been waiting for the test to short. It is a 20 gap bar sell setup, but there is no top yet. If there is follow-through buying for an hour or two, traders learning how to trade the markets should be ready for a possible sell setup and then a swing down.

The gap on the daily chart is a resistance area, even if the Emini rallies a little above it, so the current location is good for the bears. The bulls need a strong breakout above it. Even if they get it, the odds are that Monday will close around the monthly moving average, which is around 2040. That is an “average” price, which is where the market will gravitate toward after big down, big up price action.

The 60 minute chart of the EURUSD has continued down in its broad bear channel of the past week, but the pullback is still above the bottom of the bull leg that began on August 19. The bulls see a bear channel as a bear flag and correctly expect an upside breakout from the channel. However, there is no bottom yet.

The 5 minute chart had a big bear breakout 10 minutes ago. When the biggest bear bar occurs late in a bear trend, it is more likely an exhaustion gap than a measuring gap. This means that the downside will probably be limited over the next few hours. There is often a small 2nd leg down that last for about 5 bars before the pullback begins. Although this can be a measuring gap and the start of a new strong leg down, the odds are only about 30%.

An exhaustion gap is more likely to lead to a trading range than a bull trend, and therefore those trading Forex markets for a living will be looking to buy low, sell high, and scalp for the next hour or so. If instead there is strong follow-through selling or a strong reversal, they will swing trade, but neither is as likely as a trading range.

The 60 minute chart of the USDCAD is still in a broad bull channel and it is turning up from a higher low. However, the channel over the past few days is also a trading range, and day traders are trading it like a trading range. The rally of the past hour is not very strong and it is more likely a bull leg in a trading range and the resumption of the bull trend. The bulls nee the rally to break above the overnight lower high of 1.3294 for traders to think that the bulls have regained control.

Even if the bulls succeed, they will need follow-through. Otherwise, the bears will assume that the rally is just a 60 minute lower high and possibly a lower high major trend reversal. 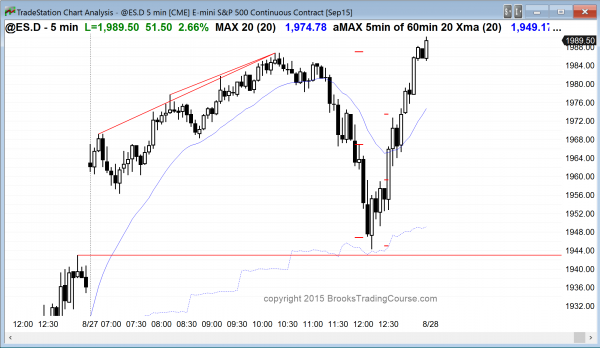 The Emini gapped up and had a wedge bull channel. This led to a reversal down in a series of sell climaxes. The Emini found support at the 60 minute moving average, just above yesterday’s high. The 3 day island bottom is still in effect.

The Emini gapped up and formed a 3 day island bottom. The rally today was strong enough so that there probably will be an attempt at follow-through tomorrow. However, the big reversal down might simply lead to a big trading range going into Monday’s close of the monthly candle.

The daily chart is still in a bear trend, but the odds are that the current rally will test the bottom of the 7 month trading range, which is in the 2030 area. The bulls might need a couple of weeks to get there, and there might be one or more legs down first. For example, the Emini might go sideways around the gap for a couple of weeks first. It might stay around the monthly moving average for a couple of months first. However, the reversal up on the daily chart from a higher low was strong enough so that the Emini probably will test the breakout below the 7 month trading range before it tests the low of this week.

The selloff is just a bull flag on the monthly chart. The moving average is around 1940, and that might be a magnet when month closes on Monday.

The weekly candlestick pattern is a reversal. Tomorrow is Friday and the bulls want a close above last Friday’s close. The bears want a close closer to the middle of the week. The odds are that the bulls will win.