The Emini began with a gap down and a trend from the open bear trend. It had a sell climax down to the bottom of the 4 day trading range. The bulls are hoping for an early low of the day. They want this selloff to be a sell vacuum down to support. The bears want this to be a bear breakout that will be followed by a bear channel, creating a bear trend day.

The Emini reversed up from a double bottom with Monday’s low. It also had a micro double bottom. However, the initial selloff was strong. This means that the current bottom is probably a minor reversal that will lead to a trading range. The bears want the bounce to be a bear flag. The bulls will probably need a major trend reversal, which would require 10 – 20 bars of sideways trading. They do not mind if the current rally reverses down after about 10 bars as long as the selloff reverses up again. Day traders will be watching the selloff and they will look to buy a reversal up. That would be a possible low of the day.

Bears want the current rally to be a bear flag. There are still targets below, like Thursday’s low and even the low of the final rally from last Wednesday down around 2068. Bear will continue to sell rallies.

At the moment, the Emini is Always In short, but it is bouncing at a key support level. If the bulls can create a major trend reversal within the next hour, they will take control and they will have a swing up lasting at least a couple of hours. Without that, the bears will sell rallies and create a channel down. Day traders will probably need another hour or so to see if the bulls can create the bottom. This means that a trading range is likely for an hour or more.

Despite reversing up strongly from the bottom of the 7 month trading range, the currently rally has been as disappointing as all of the prior ones. This is expected because disappointing follow-through is a hallmark of a trading range. The bears want continued lower highs on the daily chart. They do not worry that each high comes from a strong rally. All that matters is that it does not go above the prior major lower high. The current important lower high is the July 31 high of 2108.50. If the rally gets above that, then the bear argument that the Emini is in the early stages of a bear channel (lower highs and lows) loses credibility. Traders instead will assume that the trading range will continue, or that last week’s rally is the start of a move up to a new all-time high. Regardless of whether there is a new all-time high, the odds of at least a 10% correction this year remain at around 80%. The monthly chart is so exceptionally overbought, despite its 7 month trading range, that it should correct down to its 20 month exponential moving average soon.

The Globex chart of the Emini is down 7 points, and there might be a gap down open. The bulls see the 2 day bear channel as a bull flag after Monday’s rally. Some day traders see the all of the price action of the past 4 days as part of a big trading range after last Wednesday’s strong bull reversal up from the bottom of the 7 month trading range. It is too early to tell. All that matters near-term is that July 31 lower high, which is important resistance and therefore a strong magnet. The Emini should get there within the next few days. At that point, we find out whether the bulls are strong enough to break above it and move up to a new all-time high, or the bears are strong enough to create another slightly lower high and a double top lower high major trend reversal. If the bears win, with time running out on the monthly chart, the selloff might finally lead to a bear breakout below the 7 month trading range.

Despite yesterday’s selling and the overnight selling, the odds still favor a test up today or tomorrow. However, as always, if there is a strong breakout with follow-through up or down, day traders will look for candlestick patterns that will allow them to take swing trades. In the meantime, the 4 day trading range price action is showing no sign of ending, which means that traders will be more inclined to look to buy low, sell high, and take 2 – 4 points profit on their trades.

The Forex markets were all in trading ranges overnight and are also in trading ranges on the 60 minute charts. The Canadian dollar has the most potential for a swing trade over the next week or two. The daily chart of the EURCAD is in a bull channel and at the top of the trading range of the past year. It had strong breakouts in April and May and has had a 3rd push up from the May spike. This is a bull spike and channel pattern, which is a type of wedge top. It has turned down for the past 3 days, and this might be the start of at least 10 days and 2 legs down. Th downside targets are prior higher lows in the bull channel. This first one is around 1.4200, or about 200 pips lower.

The 3 day selloff is climactic on the 60 minute chart, which means that there might be a rally over the next day or two. Traders learning how to trade the markets should watch to see if any rally fails around halfway up, in the 1.4500 area. If so, the reversal back down would create a lower high major trend reversal, and this is a good swing trading setup, which could provide good Forex trading for beginners.

There is a similar pattern on the daily chart of the USDCAD. It is in a bull channel, and it has been in a triangle for about a month. A triangle late in a bull trend is often the final bull flag. If there is a bull breakout, those trading Forex for a living will watch for the breakout to fail and reverse down. The downside target is a test of the top of the trading range from the 1st quarter around 1.28, or about 200 pips below. A triangle can be a reversal pattern without a bull breakout, but there is a 50% chance of a bull breakout coming before a reversal down. The difference between the daily charts in the EURCAD and the USDCAD is that the odds are higher that the EURCAD will turn down from a lower high and the USDCAD has about a 50% chance of the reversal down coming from a higher high. Obviously, this is closely related to the price of oil, which has fallen sharply. If there is a bounce at some point in the next few weeks, it would probably be related to strength in the Canadian Dollar. 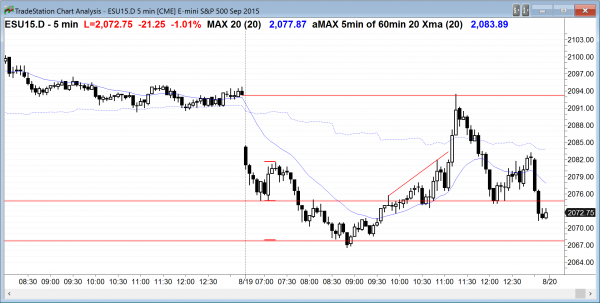 The Emini tested the bottom of the final bull leg from last Wednesday and reversed up from a wedge bottom. A strong rally that tested yesterday’s close turned out to be a 2nd leg trap in a trading range day.

The higher time frame outlook is the same. There is an 80% chance of at least a 10% correction over the next few months, even if there is a new high first.