While it is possible that today could be a strong trend day, it will more likely be a trading range day.

While I have been saying that the bears would get a bear breakout below the 2 month trading range and that bulls would buy the selloff, the strength of yesterday’s big bull reversal was a low probability event. Friday’s selloff was strong enough to make a 2nd leg sideways to down likely. Yet, yesterday reversed most of the bearishness of Friday. A Big Down, Big Up pattern creates Big Confusion. Hence, it usually leads to a trading range.

The bulls are hoping to close the gap above Friday’s high. As a result of that bull strength, they then would want a breakout to a new all-time high. Yet, the odds still slightly favor a 2nd leg sideways to down. The bears were disappointed by yesterday’s lack of follow-through selling. The bulls will probably be disappointed by a lack of follow-through buying this week. The Emini is probably trying to get neutral before next week’s FOMC report.

Because yesterday was a buy climax, there is only a 50% chance of follow-through buying in the 1st 2 hours today. There is also only a 25% chance of a strong bull trend day. Furthermore, there is a 75% chance of at least a couple hours of sideways to down trading, beginning by the end of the 2nd hour.

I said in the chat room at the end of yesterday and I wrote in last night’s blog that the bulls would probably be disappointed by bad follow-through buying this week. The Emini is down 17 points in the Globex session. While the reversal up has about a 30% chance of continuing up strongly this week, it has about about a 50% chance of staying mostly sideways going into next week’s FOMC meeting.

Because the daily range was big over the past 2 days, a trading range day today might also have a big range. As a result, day traders probably will be able to swing trade up and down today. This is in addition to their scalp trading. 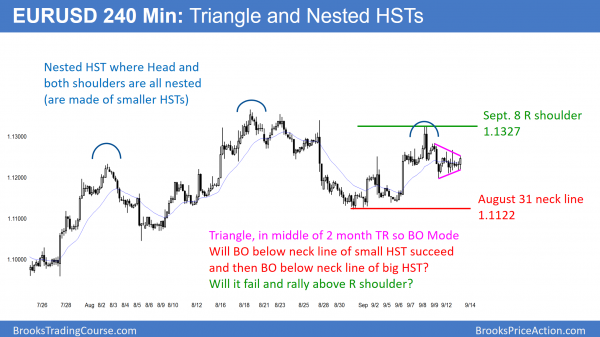 Because the daily EURUSD Forex chart is at the apex of a yearlong triangle, it is in breakout mode. Furthermore, the 240 minute chart is in a smaller triangle. The probability of a bull breakout is the same as for a bear breakout. There are nested Head and Shoulder tops and bottoms on the daily and 240 minute charts. Because the range is getting very tight, the odds are that it will probably soon breakout of its yearlong range. It might be waiting for the Fed to raise interest rates either next week or in December.

The 5 minute chart is reversing every few hours. Hence, day traders are mostly scalping as they wait for the next breakout. 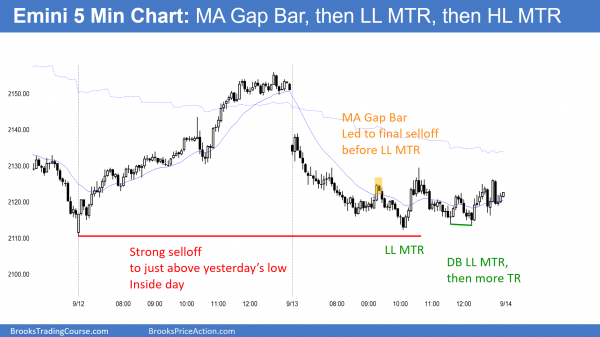