The Emini gapped up and had a trend from the open bull trend. The rally lacked big bull trend bars, and this increases the chances of an early trading range. Also, it reached last week’s trading range, and it might again go sideways here.

Finally, the first 6 bars created a parabolic wedge top. However, since the rally was not extremely strong, there is not a sense that the bulls have gone too far, too fast. It lacks a climax. When that happens, the Emini usually has to go sideways for 10 or more bars. After the trading range, it decides between trend resumption up and trend reversal down.

As I am writing, the Emini is Always In Long, but the rally so far lacks consecutive strong bull trend bars. Also, it is a parabolic wedge and it is back to last week’s trading range. This all increases the chances of a trading range for the next hour.

My thoughts before the open: Learn how to trade a weak reversal

I mentioned before yesterday’s open that the Emini was oversold in a trading range on the daily chart and at the 100 day moving average, and that it probably has to bounce and become more neutral before next week’s FOMC meeting. It is up in the Globex session and it might gap up today. However, it is around the 60 minute moving average, and this is the 1st test of the average in over 20 bars. It is also testing the breakout point below the trading range, around 2100.

Although it could continue to rally today, this is a 20 gap bar sell setup on the 60 minute chart and there will probably be sellers here. Since the Emini is oversold and at the bottom of a month long trading range, the bears will probably only get a leg down in a trading range instead of a strong bear trend on the 60 minute chart. The bulls hope that yesterday’s candlestick pattern that reversed up up from the 100 day moving average will be strong enough to lead to a test of the all-time high.

When both bulls and bears have reasonable arguments, the result is usually a trading range, and the day trading tip for today is to expect a trading range after a moderately strong reversal up from support to resistance. However, there is usually at least a couple of swing trades, even if today is relatively quiet. As always, part of any price action trading strategy is to be ready for a surprise. If there is a strong breakout up or down, online daytraders should not deny that it is happening and they should look to enter in its direction. 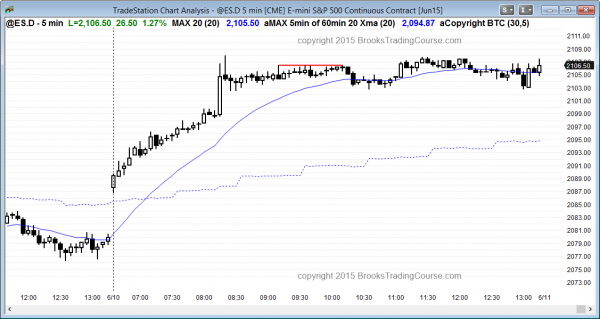 The Emini had a trend from the open bull trend. The rally was initially weak and the Emini was therefore likely to transition into a trading range. Instead, it had a strong bull breakout at 8:15 above the bull channel, and then entered its trading range.

The Emini had a strong breakout at 8:15, which is a possible measuring gap. The measured move from below yesterday’s low to the middle of the gap projects to within a couple of ticks of the all-time high. The initial bull channel for the first 90 minutes had a 75% chance of a bear breakout and a transition into a trading range. Instead, it had a bull breakout, which happens less than 25% of the time. A breakout as strong as this one is even less common.

The pullback from the breakout created a gap, and the breakout bar might become a measuring gap. The projection is almost exactly to the all-time high. The bulls will try to keep the gap open tomorrow, although there might be a test down to the middle of the breakout bar. The bears want the breakout to fail, but need a strong reversal down below the low of the bar. At the moment, the odds favor the bulls.

This serves as a reminder to traders learning how to trade the markets that every tick matters. The low of the move and the middle of the gap are exactly where the institutional computers tried to put them to make the target exactly at the all-time high. The bulls will try to keep the gap open to increase the chances of a new all-time high. The bears want to close the gap to disappoint the bulls.

Unless the gap closes, the bulls are in control and have a good chance of a rally to the old high at some point over the next week.

Traders learning how to trade the markets can see that in the overnight sessions, the Dollar and Euro were weak, and the Yen, Pound, and Canadian Dollar were strong. This Forex price action should lead traders to favor trading in those directions today, unless a strong reversal forms.

The 240 minute chart of the EURUSD is testing the May high and last week’s high. This is a potential nested double top. The bulls want an upside breakout and the bears want a reversal. There was a reversal down overnight that was reasonably strong, but it was in a spike and channel pattern so a trading range is likely today.

The Yen had a strong bull breakout overnight. The sharp move down in the EURJPY and in the USDJPY will probably have a 2nd leg down today or tomorrow. Swing traders who are trading Forex for a living know that the high probability trading strategy is to sell rallies. This probably will create a good setup for Forex trading for beginners.

The USDCAD also had a strong move down overnight, but it is close to a 50% pullback of the rally at the end of May, and it will probably enter a trading range. The was a rally a couple of hours ago that created several gap bars. The selling of the past hour might be the final leg down on the 5 minute chart before a major trend reversal forms. If so, might lead to at least a couple of hours of sideways to up trading. A trading range today is more likely today that more of the bear trend.