The Emini had follow-through selling on the open, and the selling often lasts for an hour or two. While it is possible to last all day, that is unlikely. More likely, the bulls will create a good buy signal bar within the next hour, and then there will be a swing sideways to up lasting at least a couple of hours. If the buy signal bar comes after a strong bear breakout, like now, the probability is higher for the bulls to wait for a 2nd entry buy or for a strong reversal up.

If the low probability event happens and the Emini trends down all day, traders will swing shorts. However, the bottom sometimes does not come for 2 hours and it will take at least that long for day traders to conclude that there will be no bottom. The odds are that there will, and bull swing traders need to be patient. Until there is, bears will continue to sell rallies.

The price action on the 5 minute chart has been climactic selling, which increases the chances of exhausted bears today. The result is usually at least a couple hours of sideways to up trading. Today might be a quiet day, or at least a trading range day. The Globex has been sideways overnight, although it has been trending down for the past hour. There might be follow-through selling in the first hour today after yesterday’s strong bear trend, but the chance of a bear trend day is small after such a strong bear trend day yesterday and after 3 days down. Most day traders will be cautious today after the extreme sell climax. This means that their intraday trading strategy will be to look for scalp trades until there is either a major trend reversal bottom, or, less likely, bear trend resumption.

However, since the Emini will probably correct at least 10% this year, any of these reversals down from the top of the trading range on the daily chart can be the start of a bear trend. They all look like it when they begin, but all have reversed back up. The odds are that this one will as well, even though the odds are that one will soon succeed.

Also, just because the 5 and 60 minute charts are oversold does not mean that they cannot get more oversold. Today could be another bear trend day and traders should not be in denial if it begins to look like one. If it does, which is not likely, look to swing trade shorts.

The 60 minute chart is in a spike and channel bear trend and had its 3rd push down yesterday. Traders learning how to trade the markets should know that the odds are that it will break above the channel today and try for a couple of legs up today and Monday.

Today is Friday, so weekly support and resistance are important. The weekly moving average is close to last week’s low or 2084. This week’s low is yesterday’s low. The midpoint of the week is around 2109. The bears want a close below the midpoint to have the minimum needed for a reversal bar. 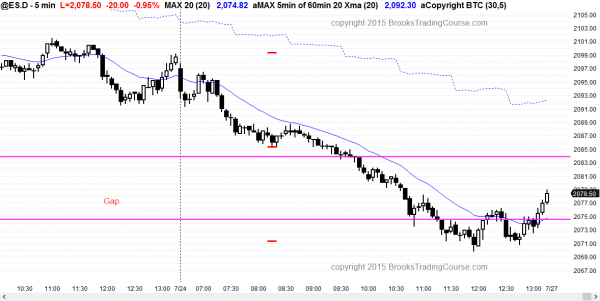 The Emini had a double top at the moving average on the open and then fell in a strong, small pullback bear trend all day. It closed last week’s gap up, but rallied from a higher low major trend reversal at the end of the day back into the gap.

Today was the 4th consecutive day of pulling back after a 9 day bull micro channel. The strong selloff tested the bottom of the gap up on the daily chart and the December high, which has been support and resistance all year. The selling this week has been so strong that the first reversal up will probably be sold. The bulls will probably need at least a small double bottom on the 60 minute chart if they are to test the high.

The monthly bar closes next Friday, and the bulls and bears will fight over its appearance. The monthly chart is extremely overbought, but the bears have been unable to reverse the monthly chart down to the moving average. There is an 80% chance that they will succeed this year, but there is no clear top or clear bear breakout yet, and it is equally likely that there will be one more strong bull breakout for the bear trend begins on the daily chart.

With the Emini as oversold as it is on the 60 minute chart, it will probably go sideways to up for a couple of days. It could gap down on Monday and create a 2 bar island top on the weekly chart, but gaps are common within trading ranges and do are not predictive of what the market will do next. If the Emini does gap down and then trade down strongly, it could be a signal that the correction on the daily chart has begun. When an oversold market continues to selloff, the market is probably in a bear trend instead of a simply forming another bear leg within the trading range, even if it has not yet broken below the trading range.

The USDCAD continued strong overnight, but it is at the top of its 60 minute bull channel and its 3rd push up after the July 15 bull breakout. It is overbought and the odds favor a pullback on the 60 minute chart starting today or Monday. The 5 minute chart rallied over the past hour and has pulled back to the moving average. There might be a little left on the upside, but those who trade Forex for a living will begin to look for trend reversal patterns for a trade down to the bottom of the 60 minute channel.

The USDJPY 60 minute chart is in a tight trading range after a 2 week rally. It is in breakout mode and it is deciding on whether it should have a 2nd leg down in its pullback, or if it has corrected enough from the buy climax and can now test the high. Traders learning how to trade the markets should be ready to enter on a strong breakout up or down for a Forex swing trade.

The 60 minute chart of the EURUSD completed 2 legs up from a double bottom with the May low. The bulls want this rally to be a bull channel that tests the top of the trading range. The bears want it to be a bear flag that will be followed by a strong breakout below the May low. It has been in a trading range overnight and there is no sign of a breakout in either direction.

The 60 minute chart of the EURGBP is similar. IT also has had two legs up and is deciding whether the bulls are strong enough to have a 3rd leg up. It has been in a trading range for 2 days and in breakout mode.