The Emini opened with a big gap down and then sold off further. Because it is so far below the moving average, it will probably go sideways to up soon for an hour or more until it gets closer to the moving average. At that point, the bears will try for a double top and then a breakout to a new low, and then a measured move down. The bulls will hope for a strong reversal up.

At the moment, the Emini is always in short, but it will probably go sideways to up until it gets closer to the moving average. Bears are hesitant to sell too low until after there is a test up.

My thoughts before the open: Bear trend channel

The Emini will probably gap down today. When there is a breakout into a possible bear trend, like the one two days ago, the market usually bounces and tests the breakout point. That happened with yesterday’s high. The rally usually lasts a day to a day and a half and then the selloff tests the bear low. The gap down open today is that test. It is also testing the measured move target around 2055 from the head and shoulders top, which is always just a trading range. This is also around the top of the January trading range. The next lower target is the February 9 higher low of 2036.50.

The bulls are hoping for a lower low major trend reversal at the bottom of the 60 minute channel. The bears do not mind if there is a reversal up as long as the 60 minute bear trend of lower lows and highs continues. The bears will sell rallies in the middle third of the prior bear leg. Bull scalpers will buy new lows, looking for a test of the breakout point.

Because of the big gap down today, the odds of a trend day are increased, and it can be up or down. Traders learning how to trade the markets need to pay attention and be prepared to buy a strong reversal up for a swing trade and a possible low of the day. Since the Emini will probably open far below the moving average, the downside might be limited for an hour or two. However, once the market gets closer to the moving average, traders need to be looking for a wedge bear flag or a double top for a possible high of the day and swing trade down.

Summary of today’s price action and what to expect tomorrow: Targets below 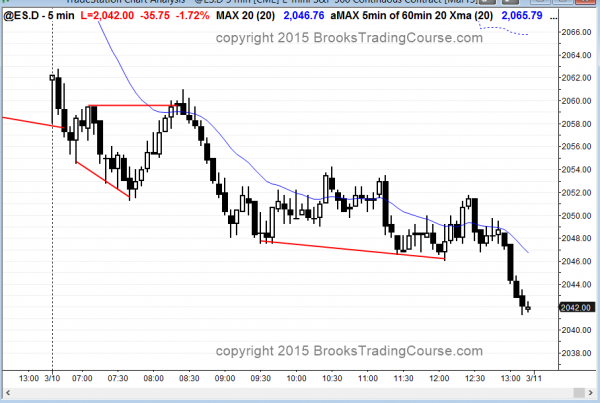 The Emini reversed up from a tight wedge. Instead of having a 2nd leg up, it sold off from the moving average in a broad bear channel. Most of the day was within a tight trading range.

This is the 2nd consecutive strong bear trend bar on the daily chart. The 60 minute bull trend line is around 2035 and the market should get there tomorrow. It is also at the weekly moving average, which was support in December and January. The tests then fell about 20 points below the average, so this test should as well. The odds are that there will be more follow-through selling to those targets below at a minimum.

Although today was a bear channel, it was not particularly climactic. Bear channels are bull flags, but the targets below are clearly pulling the market down and it is therefore too early to look for a reversal up. However, it could easily bounce after testing those targets. As long as it continues to make lower highs and lows, it will probably have to test those targets before it can bounce very much. If instead it breaks strongly to the upside without hitting support, traders will look to swing trade longs, but the bulls need a strong rally with follow-through, which they have not had in days.

Yes, the market is oversold, but the targets below are important, and it will be very difficult for a rally to break free from that gravitational pull until after the market touches that support.