The Emini had an opening reversal down from the 15 minute moving average, and is always in short. Yesterday had a lot of two sided trading. The market is now between the support of the 60 minute moving average and yesterday’s low, and the resistance of the 15 moving average and yesterday’s close. This is enough room for a trading range. The follow-through from the opening bear reversal was bad and this also increases the chances that the selloff is a bear leg in what will become a trading range. There is not yet a strong bottom and there is the magnet of support below. This increases the chances of at least a little more down. However, the odds favor mostly trading range trading today. As always, if there is a strong breakout in either direction, and it has strong follow-through, traders will more willing to swing trade.

My thoughts before the open: Trading range and breakout mode

The daily chart bounced at a 50% pullback from the February rally, and the 60 minute chart stalled after a 50% bounce yesterday from the March selloff. One time frame will win and the other will lose. This is a type of breakout mode. Tomorrow has an FOMC announcement, and the breakout might come after the report. Although today will probably have at least one swing trade, it will likely be mostly sideways, like the past several days. Traders learning how to trade the markets, however, always need to be prepared for the less likely option, which is a strong trend in either direction. 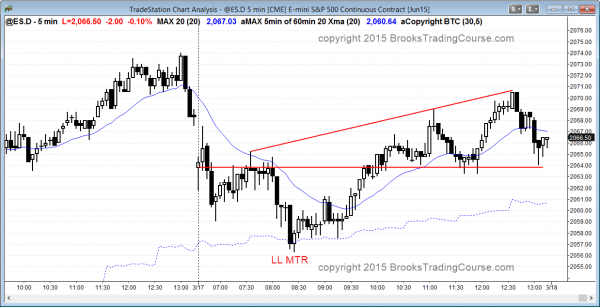 The Emini reversed up from a lower lower major trend reversal at the 60 minute moving average, and then down from a wedge bear flag to close around the open of the day.

The Emini sold off on the open from a test of the 15 minute moving average, but the follow-through was weak and this made a rally likely at some point. The lower low major trend reversal tested yesterday’s close and formed a wedge top at a measured move up from the low of the day to the open of the day. The market closed around the open and created a neutral, doji day going into tomorrow’s 11 a.m. FOMC announcement.

These meetings might lead to big moves over the coming months as the Fed’s approach to interest rates begins to change. Tomorrow will probably have a big breakout and trend on the report, but there is often a false breakout first.