The Emini opened with a big gap up and a strong bull bar. However, it needs to break strongly above the February 7 lower high, which is around the 60 minute moving average and the top of yesterday’s sell climax. More likely, today will mostly overlap yesterday and be either a trading range day or a bull trend day. Since this open is a break above a tight bear channel, it is a strong minor reversal. Therefore, the bulls will probably need a major trend reversal if today is to be a bull trend day. That means there will probably be a 3 – 10 bar selloff within the 1st 2 hours. However, the context and early bull bars are good for the bulls. Therefore the odds are against a bear trend day.

The Emini rallied for the 1st half of yesterday, but collapse to a new low after the FOMC report. Yesterday was an outside down day. It formed a micro double top on the daily chart and therefore it is a sell signal bar for today. Yet, the 6 bull bars over the past 2 weeks make a minor reversal down more likely than a bear trend.

The bulls want a breakout this week to above last week’s high to trigger the buy signal on the weekly chart this week. However, the probability is less than 50% after yesterday’s selloff.

The bears have prevented the weekly buy signal for 2 days. They are trying to keep this week within last week’s range. That would create consecutive inside bars on the weekly chart (an ii pattern). That stall in the 2 week reversal up would therefore give them a higher probability chance of another leg down.

Because the bear and bull cases on the daily and weekly charts lack high probability, the odds are that the Emini will continue sideways for possibly several more weeks. The odds still favor at least one more leg up on the daily chart. However, a reversal down at that point would create a wedge lower high. That would likely lead to 2 legs down. It would take weeks for this to unfold. As a result, a trading range is likely for a few more weeks.

The Emini is up 8 points in the Globex session. Since yesterday was a sell climax day, there is only a 25% chance of a strong bear day today. Furthermore, the 2 day selloff is more likely a pullback from a 6 day bull micro channel than a resumption of the early February bear trend. Therefore, the selling will probably end today or tomorrow.

Since yesterday was a sell climax, there is a 75% chance of at least 2 hours of sideways to up trading today that begins by the end of the 2nd hour. Because a bull flag on the daily chart is likely, the odds are that the bears will be disappointed by today. Yesterday was an outside down day. An inside day would disappoint the bears. Alternatively, an early break below yesterday’s low that reverses up would also disappoint them. Consequently, traders should look for an early test of yesterday’s low that reverses up.

One target for the bulls is the top of the sell climax at 2727.75. That is also around the February 7 lower high, which has controlled the Emini for the past week.

If there is an early strong break below yesterday’s low, then today would have an increased chance of being a bear trend day. However, a trading range or bull trend day are more likely because of the strength of the 6 day bull micro channel and the 2 big reversals up on the daily chart. 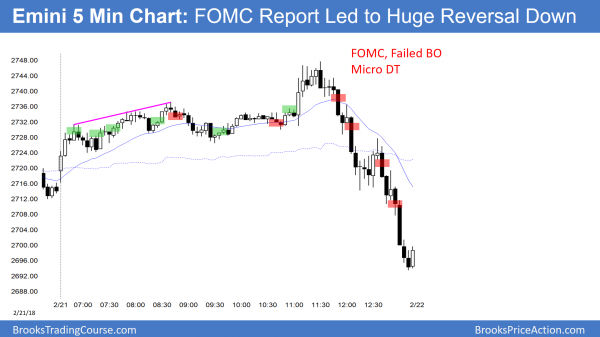 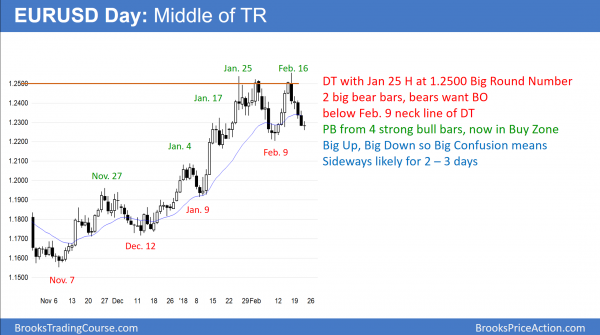 The EURUSD daily Forex chart has sold off for 5 days. However, there are no consecutive big bear bars and it is still in a month-long trading range.

The EURUSD daily Forex chart reversed down from a higher high double top with the January 25 high. Yet, there have been no consecutive big bear bars. Furthermore, the selloff is so far simply a bear leg in a month-long trading range. Since most trading range breakout attempts fail, this one will probably reverse back up for 100 – 150 pips within a few days. Yet, after a 5 bar bear micro channel, it will probably have to go sideways for a few days and forma a micro double bottom first.

The bears want a break below the February 9 neck line of the double top. They then want a 300 pip measured moved down to around the January 9 low and the November 27 high. That high is the breakout point of the December rally on the weekly chart.

Yet, the 5 day selloff has small bars and it is still above the February 9 bottom of the range. Therefore, a 100 – 150 pip bounce from this area is more likely than a successful strong breakout below the range.

The weekly chart has a micro double top and the monthly chart has a wedge bear flag. The odds favor a test down to below 1.20 within a few months. However, there will probably be a bounce first. In addition, the trading range could last 2 – 4 more months before there is a successful breakout up or down. My Brooks 80% rule says that 80% of trading range breakout attempts fail. Consequently, a continued trading range is always more likely than a successful breakout. There is no breakout until there is a clear, strong breakout.

The EURUSD 5 minute Forex chart has sold off in a tight bear channel for 5 days. Most tight bear channels evolve into trading ranges within about 3 days. Therefore, the odds are that the 5 minute chart will enter a trading range today. In addition, the top of the range will probably be at least up around the middle of the month-long trading range. Hence, the odds are that there will be a 100 – 150 pip rally that begins within a few days. Therefore, day traders should look for a buy setup to catch a 50 – 100 pip bounce.

A strong trend can come at anytime. Since there is a magnet around 1.20, traders have to be ready to swing trade if there is a strong bear breakout. However, the odds are that the trading range will last at least a couple more weeks. Therefore, most swing traders will be looking for only 50 – 100 pip trades until there is a breakout. Since a trading range is likely for today and tomorrow, day traders will probably mostly scalp for 10 – 30 pips. 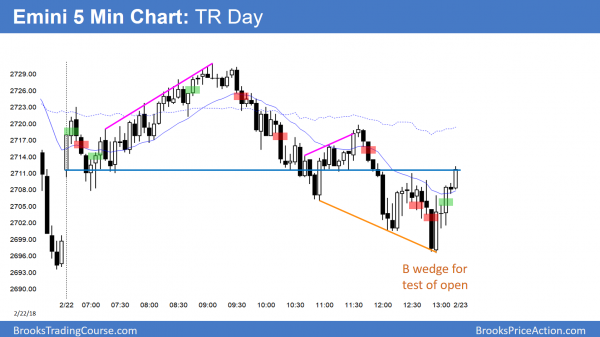 The early rally failed at the February 7 high, which has been the most important price all week. After testing yesterday’s low, the day closed near the open. It was therefore a doji day, which is a trading range day.

The Emini had a reversal day today after failing to break above the 60 minute moving average and the February 7 major lower high. However, the selloff was just a bear leg in what became a trading range day. Ir closed at the open and therefore was neutral. The daily chart has an ioi Breakout Mode setup, but the 5 day tight trading range reduces the chances of a big breakout up or down.

Tomorrow is Friday and last week’s high is far above. It is more likely that the buy signal on the weekly chart will trigger next week. The open of the week is the nearest weekly magnet.