The bears need a series of consecutive bear bars before traders will think that they have taken control. Without that, the best the bears will probably get is a trading range.

The Emini is at the apex of a triangle on the daily chart and formed dojis for the past 2 days, and for the past 2 weeks on the weekly chart, giving day traders a chance to learn how to use futures trading strategies in a triangle. It is neutral going into next Wednesday’s FOMC meeting. Because it is in a triangle, it is forming higher lows, which means it is in the early stages of a bull trend, and lower highs, which means it is also in the early stages of a bear trend. Once it breaks out up or down, traders will see the trend as having begun several weeks ago at the start of the triangle.

The breakout can come immediately after the report next week, or any time before, including today. It does not have to come for many months and can instead remain in a tight trading range, although that is unlikely. There is a 50% chance that the breakout will fail and then reverse. The bigger the breakout and the stronger the follow-through, the more likely it will be the start of a swing on the daily chart.

The Emini is currently down about 1 point on the Globex chart and it is still above the bottom of last week’s bull reversal. Since it is near the bottom of the triangle on the daily and 60 minute charts and a triangle is a trading range, it is more likely to begin to trade up today or tomorrow than successfully breakout to the downside. However, if there is a strong bear breakout, those who trade the market will swing trade their shorts and not worry about why something is happening that should not happen. Traders learning how to trade should always be open to the Emini doing the exact opposite of what they think is likely.

The weekly chart had a big doji last week and a smaller doji the week before. This week is an inside bar and near its low. If it also becomes a doji, it will have to trade back up to near the open of the week by Friday’s close. This is another reason why there is a slightly higher probability of a rally into the end of the week.

A trading range day has at least one swing up and one swing down. The swings last at least an hour, but can last several hours. If the day is small, the swings can cover only 3 – 4 points. Although traders expect trading range price action, they will be prepared to swing trade if there is a strong breakout up or down.

The EURUSD has rallied back to the top of last week’s bull breakout, as I have been saying it would probably do. The bears want a double top and then a reversal down. The bulls want a 2nd leg up that is about the height of last week’s 400 pip bull breakout.They both might get what they want. Whether or not there is a double top and a reversal down over the next few week’s, last week’s bull breakout was so exceptionally strong that there is a 60% chance of follow-through buying for several weeks beginning either now or after any pullback.

The overnight rally has been especially strong over the past 2 hours and it is breaking above the tight bull channel on the 60 minute chart. There is a 25% chance that a bull breakout of a bull channel will lead to a measured move up and a 75% chance that it is a buy vacuum test of resistance (last week’s bull trend high) and will fail within about 5 bars. When a buy climax fails, the bull trend is more likely to transition into a trading range than reverse into a bear trend. This means that there is a 75% chance of a trading range on the 60 minute chart starting at some point today.

The 5 minute breakout over the past 2 hours has been strong. This means that bulls will buy the first reversal down, which will probably be about 20 pips. They know that the odds that the first reversal down will probably fail and be followed by at least a test of the high. However, they will be quick to take profits if the test back up stalls. If it does, they will conclude that the bull trend has ended and a trading range has begun.

Until the buy climax reverses, they will continue to swing trade their longs. However, since the EURUSD is above its 60 minute channel and the 5 minute chart is in a parabolic bull breakout, the odds of a reversal down soon are high. Day traders should expect at least a couple of hours of trading range price action soon after the stock market opens in 30 minutes. 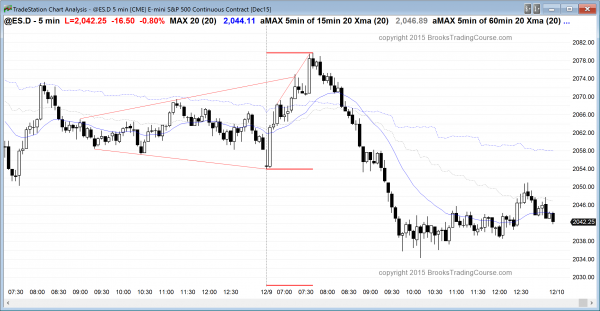 The Emini rallied and formed a parabolic wedge for the high of the day, and then sold off in a strong bear trend.

The Emini was in a strong bear trend. It ended the day in a tight trading range. The bears want follow-through selling tomorrow and then a break below the November low. There is a double top on the daily chart and a bigger one on the monthly chart, but both charts are still in trading ranges. Big bear days always look like the start of a bear trend. Big bull days always look like the start of a big bull trend. Until there is a breakout, there is no breakout. The probability is that strong days up and down will have bad follow-through and then be followed by an opposite strong move up.

Because today’s selling was so strong and the bulls were unable to get a strong leg up at the end of the day, the odds favor at least an hour or two of selling on the open tomorrow. A tight trading range late in a bear trend is usually the final bear flag before a swing up.

There were gap bars at the end of the day (gap between the low of the bar and the moving average). This is a sign of strong bulls. The selloff from gap bars in a bear trend has a 60% chance of leading to a major trend reversal buy setup. However, only 40% of major reversal setups lead to major reversal. The rest fail and either the bear trend resumes or the market enters a trading range.

I mentioned several times that the daily chart is in breakout mode and that the breakout might come before next Wednesday’s FOMC announcement. Is this it? Probably not, but if there is relentless selling tomorrow and Friday, the odds go up for the bears. Right now, the daily chart is still a 50-50 market.