The Emini gapped up to the top of the 60 minute bear channel. The 1st 3 bars were bull bars and formed a Trend From The Open bull trend. Because the bars were not big, the bulls were somewhat hesitant. Also, the Emini is overbought on the daily and 60 minute charts. Yet, overbought is not enough for the bears. They need to create a reversal, and the Emini can become much more overbought before the bulls begin to take profits.

Because today is overbought and yesterday was a small day, today could become a bear trend day and an outside down day. The bears need a series of bear bars or one or two big bear bars before traders will think this is likely.

With yesterday being mostly sideways and today not moving up or down much on the open, today will probably have a lot of trading range price action again. This is true even if it is a trend day up or down.

While the S&P cash index finally broke to a new all-time high yesterday, the Emini closed just below its midpoint. As a result, yesterday is a sell signal bar for the Expanding Triangle top that I mentioned over the weekend. Because the 3 week rally is in a tight bull channel, the bears will probably need a 2nd sell signal. Yesterday was the first. Therefore, the probability is that there will be more buyers than sellers below its low.

While a trend reversal can happen at any time, this is a low probability sell setup. A low probability sell setup can create a reversal if it leads to a big bear bar. Furthermore, it can reverse down if there is a series of 3 or more small bear bars closing on their lows. Without at least a micro double top, the odds of this are low. Therefore, any reversal probably be minor and part of a bull flag.

There is still room to the top of the wedge bull channel on the 60 minute chart. The line is rising and it will be around 2145 on the open today. It is a resistance level. As a result, bulls will probably take some profits there and bears will begin to sell, at least for scalps.

The Emini is up 10 points in the Globex market, and it will probably gap up today. While the bulls do not have a big bull trend bar for its breakout to a new all-time high in the cash index, they still can create a strong breakout. They will be successful if they can form a series of small consecutive bull bars closing near their highs. The bears will try to prevent this strong follow-through buying.

While yesterday was a sell signal bar on the daily chart, today will probably trade above its high. It might not trade below the low to trigger the sell signal. However, a gap up in an overbought market often leads to a reversal down. If that happens, today could be an outside down day and trigger the sell signal later in the day buy trading below yesterday’s low. That would create a micro double top. It would also probably stop the current rally for a few days. 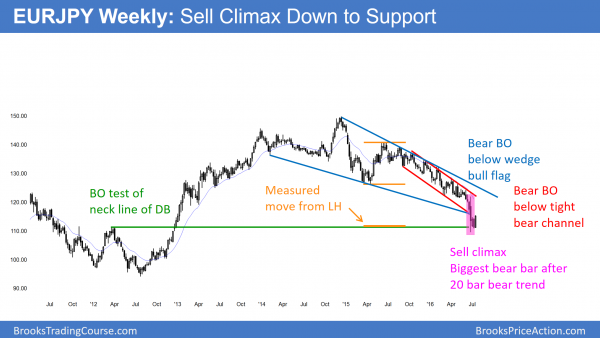 Three weeks ago, the weekly chart of the EURJPY Forex market had the biggest bear bar in a tight bear channel that lasted more than 20 bars. In fact, the channel lasted more than 50 bars. This bar is more likely an exhaustion gap than a measuring gap. The gap is between its close and the low of the prior bar. The overnight rally closed the gap by going above the June 16 low of 115.49. There is a 60% chance that the rally will eventually reach the top of the sell climax bar before falling for a measured move down (based on the height of the bar).
The selloff also broke below 2 types of bear channels and is reversing up. There is a 75% chance that the rally will reach the top of the two channels.
The sell climax is a Sell Vacuum test of support. The support is the neck line of the double bottom in 2012, and the measured move projection down from the 2015 lower high.

On June 24, I mentioned that the EURJPY daily chart had a big bear breakout. I said that it was more likely an exhaustive sell climax than a measuring gap. I said that the chart would probably enter a trading range that could last a month or more. This is what is happening.

Because an exhaustion gap is more likely than a successful bear breakout, there is a 60% chance that the EURJPY will rally to the June 24 sell climax high before it falls for a measured move down based on the height of that bar. While the bears still might get one more push below the June 24 low before the rally, the odds still favor the rally.

The daily chart of the EURUSD is unchanged. It is still in a trading range, and most days will be mostly small and sideways. The overnight range was 40 pips, which means that traders are still scalping. While the odds are slightly better for the bulls over the next month, the probability is that most days will be small, trading range days.

After an Opening Reversal down to the moving average, the Emini rallied for a couple of hours and then formed a tight trading range.

The Emini gapped up to a new high, pulled back, and then rallied today. While today was sideways for 4 hours, the Emini still closed at a new all-time high and formed another bull bar on the daily chart.

As a result of the tight trading range after a rally, the Emini is in Breakout Mode. The bulls want trend resumption up and the bears want trend reversal down tomorrow. The Emini finished Always In Long so the odds favor the bulls again tomorrow.