Today opened with a big gap down to around a measured move down based on yesterday’s range, and around the low of the bull channel of the past week. The bears failed to get continued early selling. This increased the chances for a sideways to up move to the moving average.

The bulls tried to reverse up, but were unable to create a strong bull signal bar. Also, their 1st attempts up were not strong. This is also consistent with a trading range lasting for a couple of hours. The odds are that the Emini will trade sideways to up and create a bull leg in what will evolve into a trading range for the 1st 2 hours. Once it gets near the moving average, traders will decide whether it will break above, or reverse down.

Less likely, this type of open will lead to a strong trend day. Unless there is a strong breakout up or down the odds favor a trading range for the next two hours, and the 1st swing is more likely up than down.

For the past couple of weeks, I have been saying that the continued rally would end up as a bull leg in what would become a trading range that might last about a month. Yesterday was the 1st sign that the buy climax was ending and it might be evolving into that trading range. I also said over the weekend that after 8 consecutive bull bars on the daily chart and 6 on the weekly chart, there was a 70% chance of at least a 30 – 50 point correction within a few days.

The Globex is down 11 points, and it is 31 points below the Tuesday high on the daily chart. How far down will this go? A trading range is likely for the next month, and the Emini probably made a reasonable initial high for the range. The odds are that the range will be 50 – 100 points tall. The 4 other ranges in the past 2 years that have lasted more than a month were over 100 points tall. I wrote a couple of weeks ago about the thin area on the daily chart. Although the Emini rallied back above it, the odds still favor a trading range in that thin area, and this might be the start of that back-filling.

The obvious support levels are 2,000, the 20 day EMA on the daily chart, which would be around 2,000, and the higher lows and breakout points on the daily chart. The 1st is the March 15 low of 1995, and it is also last week’s low. If the Emini trades below it by today’s close (the market is closed tomorrow), the week will be an outside down week. If the context is good, it can be the start of a swing down. Here, the context is bad for the bears, and the nest they probably can get is a trading range for a couple of weeks. If they are unable to strongly reverse the Emini, the value bulls will overwhelm them, and the Emini will test back up after a week or two. This is likely. The odds of this pullback lasting only a couple of days and begin followed by at least 2 more weeks of a rally are about 30%.

Because the rally has been so strong, the odds of a bear trend are small. However, the momentum bulls, who have controlled the Emini for the past month, will be quick to get out. They might create a deeper and faster pullback than what traders might assume is likely. They were buying because the Emini was going up. Once it stops, they sell. Value investors do not get shaken out easily, and they will hold. They will also look to buy the 1st leg down because they will see it as an opportunity to buy at a discount. They look for value.

Today might gap down on the Emini. There have been many gaps up and down over the past 2 years in the trading range, and they are meaningless. If the Emini gaps down, the odds of a trend day increase, and there is a slightly greater chance of a bear day. Traders will watch the first several bars to see if they are big consecutive trend bars up or down, which is often a sign of a trend from the open type of trend day. More likely, the initial move up or down lasts 5 – 10 bars and then the Emini forms a trading range. Bulls will look to buy a reversal up from a double bottom or wedge bottom. They want a bull signal bar near the bottom. Bears will look to sell a double top or a wedge top near the moving average. They want a bear signal bar near the top of the range.

The EURUSD has traded down for the past 5 days, but it is still above the March 16 bottom of a strong bull trend day. The odds are that this selloff is still a pullback. Because it has retraced so much of last week’s rally, and a bear trend is not yet likely, the odds are that the selloff will result in a trading range over the next week or so. Traders will look to buy low, sell high, and take quick profits. The EURUSD is now low, and traders will look to buy.

The 60 minute chart is in a bear spike and channel pattern. The bear channel began with the pullback on March 18. There was a possible measuring gap on the March 22 bear breakout. The European session tested the measured move target twice. The second bounce has not had a series of big bull trend bars on the 5 minute chart, and it looks more like a bull leg in a trading range or in a bear channel. The context, though, is good for the bulls.

The bulls need a rally above a significant lower high in the 4 day bear trend. The current obvious target is last night’s lower high around 1.1187. If the bulls can get above that, the 4 day bear trend will probably have ended. The EURUSD will then have transitioned into a trading range, or possibly a bull trend. However, because of the Big Up, Big Down pattern on the daily chart over the past 2 weeks, a trading range is more likely.

Bulls have been buying every new low for scalps. They will now probably begin to buy breakouts below bear flags before there is a new low. This would create higher lows, and it would be the first sign that the 4 day bear trend has ended. Day traders today will begin to look for higher low reversals, and strong bull breakouts with follow-through. They would then begin to swing trade their longs on the 5 and 60 minute charts. Bears would switch to scalping.

Less likely, the 4 day bear channel will continue down today, or even accelerate. If it accelerates, bears will once again look for swing trades. 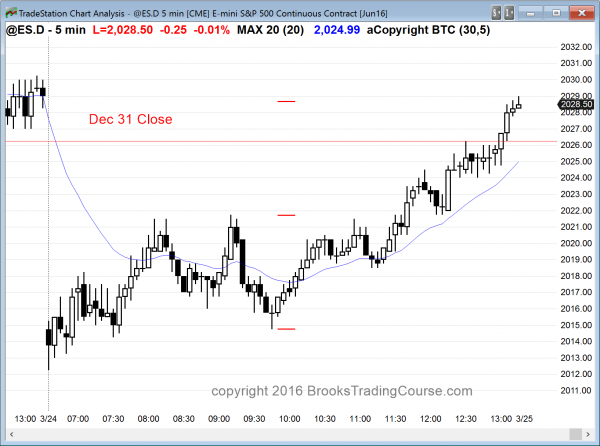 After a gap down and a 4 hour trading range, the Emini rallied to a measured move up and a weekly close above the December close to keep the market positive on the year.

The Emini gapped down and went sideways for the 1st half of the day but had several bull micro channels that were a warning of a possible move up to the December 31 close.

The daily and 60 minute charts broke below their tight bull channels, but the rally closed back up near the bottom of the channel. Today reversed up from gap bars below the 240 minute moving average. The rally that began in the middle of the day will probably lead to an attempt at a major trend reversal down next week. Less likely, the Emini will continue up to its all time high. The pullback was about 40 points below last week’s high. I have been writing all week that the odds favored at least a 30 point pullback this week. Although there might be a 2nd leg down next week, the minimum objective has been met, and that will make many bulls willing to buy again for another leg up. They bought today, knowing that the next leg up might be brief. Next week is the end of the quarter, and the last 2 weeks of March typically are up.