The Emini sold off strongly on the open from a gap up to the 60 minute moving average and a test of yesterday’s high to far below yesterday’s low. This selling has been extreme and therefore climactic. While it could continue all day, it more likely it will run out of sellers at the lows. Bears will take profits and wait TBTL before selling again. This usually results in a trading range that could last for hours. Bears will look to sell a rally to resistance, like yesterday’s low and the moving average. When an opening selloff is this extreme, it can function like a parabolic wedge bottom and be followed by a rally that can last for hours. Once the selling stops, bulls will begin to look to buy for scalps. If there is a strong reversal up and a bull breakout, they will buy for a swing. The range is so big that a bear rally can be a swing buy for the bulls. Sideways to up is likely for the next several hours.

The Emini fell below the 60 minute bull trend line and below Friday’s low. If there is follow-through selling today, then the bear trend on the daily chart is probably resuming. More likely, the trading range will grow. In a trading range, the market usually falls below support, but then reverses up. If there is a bounce today or tomorrow, it would increase the chances that yesterday’s selloff was just a vacuum test of support within a trading range. Trading ranges have inertia and are resistant to change. This means that the probability of the trading range growing is greater than the probability of the bear trend.

The Emini is up about 5 points with less than an hour to go before the open of the day session. Yesterday was a bear wedge. The odds are that there will be 2 legs up. The wedge lasted about 4 bars. The odds are that the 2 legs up will last at least 20 bars. The 1st leg up began at the end of the day. The bulls will buy an early selloff, betting on at least one more leg up.

Bulls on the 60 minute chart see that yesterday’s selloff held above Friday’s higher low, and it might be forming a higher low in the bull channel that began on January 20. The bears need to push the Emini below higher lows to convince traders that the Emini has converted from a bull channel into either a trading range or a bear trend. They have not yet accomplished this. As strong as yesterday’s selloff was, it was not bearish enough on the 60 minute chart to get the bulls to change their mind.

Today and tomorrow are important. The bears need to do more. If they cannot get strong follow-through selling that drives the Emini below a major higher low, the Emini will rally again soon and test Monday’s high, which was a 50% retracement of the January selloff.

The EURUSD tested the top of the 2 month trading range in the European session in the past hour. It has pulled back with 30 minutes to go before the open of the NYSE. I have been writing every day since the December 3 bull trend reversal that the odds favored a trading range and then a 2nd leg up. The trading range has lasted 2 months. Those who trade the markets for a living see every strong rally and selloff within the trading range as just a test of the borders of the range and expect reversals.

This trading range has gone on for a long time so it is likely getting near the time when it will breakout. However, until there is a breakout, there is no breakout, and online day traders will assume that all of these breakout attempts up and down will fail. Bulls take profits near the top and bears begin to sell. Bears take profits near the bottom and bulls begin to buy. One side or the other will at some point change its behavior and create a successful breakout that will be followed by a measured move. The target would be a measured move based on the height of the trading range, which is about 200 pips.

The most recent dominant move on the daily chart was the bull trend reversal. As long as there is not a comparably strong bear move, the odds favor a bull breakout. With each bar that gets added to the range, the probability drifts down from its initial 60% to close to 50%, which is where it is today. The bulls still have a slight edge, but it is not great. Day traders will continue to fade moves up and down until there is a strong breakout. Because the EURUSD is at the top of the range, traders will be ready to buy quickly if there is a strong breakout. So far, it has not happened. If the EURUSD begins to selloff today or tomorrow, they will again look to sell for a test back to the middle or bottom of the range.

The breakout an hour ago was strong, but the follow-through has been bad. This is more consistent with a test of the top of a trading range that with a successful breakout. Traders need more information before they conclude one way or the other. The bulls need a strong breakout today or tomorrow. It is more likely that they will not get it and instead the EURUSD will reverse back down into the trading range. If they do get it, the trading over the next several days will switch from the scalping of the past 2 months to swing trading on all time frames. 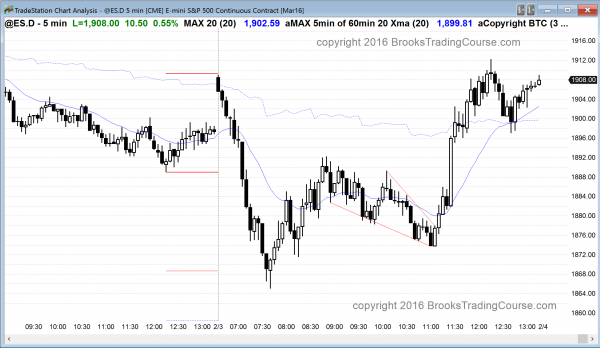 As I mentioned after the open, the odds were that the Emini would trade sideways to up for several hours. It completely reversed the initial huge selloff.

The Emini sold off strongly on the open to just above the January 27 higher low. It then reversed up to a new high of the day. I said that the January sell climax would probably have 2 legs sideways to up and that the rally that ended on Monday might just be the 1st of the 2 legs. Today’s reversal might be the start of the 2nd leg sideways to up. The Emini has been in a trading range for several weeks, and this might continue for 2 or more weeks. The bulls want follow-through buying tomorrow. Since a trading range is more likely than a bull trend on the daily chart, it is more likely that the bulls will be disappointed, just as the bears were today. The swings up and down have been big for the past few weeks, but all have been part of a trading range, and there is no sign that it is about to end.