The Emini opened with a trend from the open bull trend, but with bad follow-through after strong bull bars. This is more common with rallies within trading ranges than in bull trends. There were several reversals and both bulls and bears made money several times scalping with limit orders. This is trading range price action and it increases the chances that today will be a trading range day. A trading range day has at least one swing up and down, with each lasting 2 – 3 hours.

Day traders look for a small bull bar near the bottom to buy and bears want a small bear bar near the top to sell. When signal bars are not perfect, traders wait for micro double tops and bottoms for stop entries, or for strong breakouts with follow-through for market order or buy the close and sell the close entries. Unless there is a clear breakout up or down, traders will be quick to take profits.

The Emini pulled back yesterday, as it was likely to do. It was a broad bear channel, which traders who trade for a living see as a bull flag. Monday’s strong rally is still close enough in time to be controlling the price action. Those learning how to trade the markets should look for at least one more leg up this week. The pullback has not yet ended and it might have one or more legs down. However, the probability is that there will be a rally today or tomorrow, whether or not there is more sideways to down trading today.

Whenever something is particularly likely, the market is creating the potential for a Pain Trade. Everyone is expecting follow-through buying from Monday and a test up to the November 11 high around 2080. When everyone is either positioned or ready to be positioned for that to happen, many traders are nervously long and quick to get out if it does not happen or if the bull trend resumption is weak.

Many bulls are trapped into their longs, denying what is in front of them, and eventually get squeezed out at much lower prices. Bears get trapped out because the selloff would be low probability. They begin to sell every small pullback.

I wrote 2 weeks ago that the Low 5 sell setup of November 3 would probably be followed by at least a 2 week trading range. Nothing has changed. The trading range could last much longer. However, when an extreme buy climax like the one that ended on November 3 is followed by a surprisingly big selloff, the Emini often enters a trading range that contains both a double top and a double bottom. So far, the developing range has a single bottom and top. This means that the range might continue for at least a couple more weeks. The Emini would then be in breakout mode for either a measured move up to a new high, or a measured move down, which would increase the chance of a break below the October low to 60%.

The Globex market is currently up about 5 points, and it has rallied 11 points over the past 4 hours. The Emini ended the day session yesterday with a triangle after a strong bear breakout. The bulls are hoping that today will be a bull breakout above the bear flag and that the Emini will work above yesterday’s high, creating a 2nd leg up from Monday’s strong rally. The bears want at least a 2nd leg down from yesterday’s selloff at 11:30 am PST. The odds favor the bulls once this pullback from Monday’s rally is complete, and the rally will probably begin in the next 3 days.

The EURUSD 60 minute chart broke above a 5 day tight bear channel overnight, and it has pulled back over the past 4 hours. The bulls are hoping for a higher low and then a 2nd leg up.

The daily chart has had a series of sell climaxes (big bear days) since its October 22 strong bear breakout. The selloff into yesterday was the 3rd push down (October 23 and November 10 were the first 2) Three pushes down in a tight bear channel is a parabolic wedge, which is a type of sell climax. Because the wedge channel is tight, we know that the bears are strong and the selling could easily continue down in a tight channel to below the April and March lows. However, because the selling is in a parabolic wedge, which is a type of sell climax, there is a 505 chance of at least a couple of small legs up on the daily chart over the next week or two. Traders are looking at smaller time frame charts for buy setups that would allow them to enter with a smaller risk. A buy setup on the 5 minute or 60 minute chart will have a stop that is closer than a buy setup on the daily chart.

The overnight rally on the 60 minute chart has 4 hourly bars with gaps between their lows and the 20 bar EMA. Since bars were entirely above the moving average, the market is telling us that the bulls are beginning to show a sign of strength and the bears are beginning to take profits. This is often the start of a trading range. A trading range has legs up and down. When gap bars form late in a bear trend, the odds are that the selloff that follows will lead to a test of the low and then an attempt at a major trend reversal. Most major trend reversals lead to trading ranges and not actual major reversals, but the leg up is usually big enough for a swing trade. Day traders will be looking for a higher low and a buy setup today or tomorrow for a at least a 100 pip rally. The rally might test the top of the November 13 trading range, which is about 200 pips above.

The bears want the bear channel to continue down to a new low of the year, but this minor sell climax gives the bulls at least a 50% chance of a bounce first. 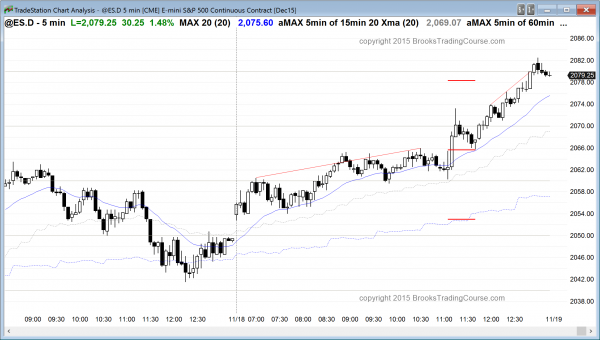 The Emini was in a trending trading range day and weak bull channel, but had a strong breakout on the FOMC minutes and rallied into the close.

The daily chart tested the top of last week’s 3 day bear breakout, and it might go above last week’s high to create an outside bar on the weekly chart on Friday’s close. Although the buying was climactic and there might not be follow-through buying for the 1st hour or two on tomorrow’s open, traders will buy a pullback tomorrow. There is a 75% chance of at least 2 hours of sideways to down trading tomorrow after today’s buy climax. It can start on the open, or after an hour or two of follow-through buying. There is a 50% chance of buying on the open for an hour or two.