The Emini gapped up, but the gap was small, the tails were prominent, and the 1st bodies were not big. The gap still might become a measuring gap. However, this price action increases the chances for a trading range open where the Emini forms a double top and a double bottom over the 1st hour or two, and then decides on whether to have a swing up or down. If there is a strong breakout at any time, traders will swing trade. Until then, the odds favor a trading range open. The open of the week might be important all day.

The Emini yesterday did what I said since late April that it would probably do at some point in May. It traded below the April low, triggering the sell signal on the monthly chart. I also have said many times that the weekly and monthly charts have been bullish lately, and that made it more likely that there would be more buyers than sellers below last month’s low.

Because April was small and there are still 7 trading days left in May, May might become an outside up month on the daily chart. It is reversing up from below April’s low, and it might trade above April’s high, which would be a new all-time high.

Yesterday fell below the April low and the bottom of the 2 month trading range and reversed up. This is a failed bear breakout. The selloff from the April 20 high had 2 legs down, which often ends a leg in a trading range. That means that yesterday is a high 2 buy setup, as well as a buy signal bar for the failed breakout below the trading range.

The trading range was also a Head and Shoulders top, and like all tops, had only a 40% chance of leading to a reversal down. Sometimes a failed breakout fails within a few days. For example, if the Emini goes sideways to up for a few days, the bears will see the candlestick pattern as a bear flag instead of a failed bear breakout, and they will look to sell a breakout below the low of the bear flag. This could lead to a successful breakout below the April low, despite the delay of several days. The bulls need a strong reversal up over the next few days to make the bears give up.

Even though yesterday was a bull reversal day at the bottom of a trading range, it is important to remember that trading ranges repeatedly disappoint bulls and bears. Just like the bears were disappointed by the reversal up yesterday after triggering a sell signal on the monthly chart, the bulls will be disappointed if there is a strong bear breakout within the next few days that falls far below yesterday’s low. If the bears can create that, traders will begin to look for a measure move down.

Since yesterday was a reversal up from a breakout below a trading range, the odds are that there will be follow-through buying today. However, yesterday’s reversal up was not very strong on the 5 minute and daily charts. The bulls need a strong reversal up within the next few days. Without it, the bears will again try to break below April’s low. If they get a big bear breakout, it could be followed by a swing down on the daily chart. Whether or not they get it, they might be able to test the April low one more time. The bulls will then see a reversal up at that point as a small double bottom.

The Emini currently has its 4th consecutive bear bar after an 11 week bull micro channel on the weekly chart. That is unusual. The 1st pullback below a bull micro channel typically only lasts 1 – 3 weeks before there is a test back up. The current pullback is in its 4th week. Because this is a little extreme, the odds are that it will end this week or next, and the bulls will test the May 10 lower high. Less likely, today’s reversal will become part of a 1 – 3 day bear flag, and the bears will then get a big breakout and measured move down.

Today is a Friday and the open of the week is 2044.25, which is only about 6 points above yesterday’s close. If the Emini is within about 5 points of last week’s close at the end of tomorrow, the bulls will try to create a rally to make the week close above its open. That would also end the streak of bear bodies on the weekly chart at 3, and it will increase the chances of a rally that could last a week or more.

The Emini is up 6 points in the Globex market and at the open of the week. Overnight trading was quiet. There might be a small gap up today. Because of the 2 month trading range, the Emini has lacked sustained moves or 3 or more days up or down. 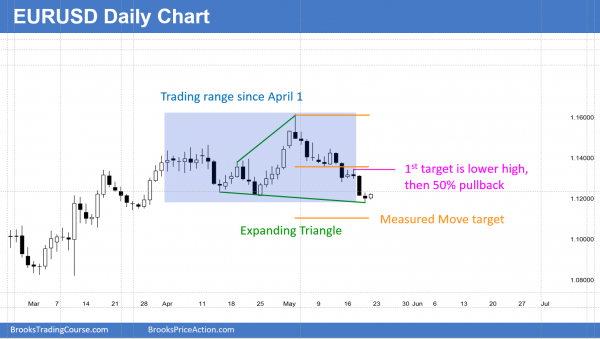 The daily EURUSD Forex chart has an Expanding Triangle bottom. The bear breakout was weak and there should be a bounce soon. The EURUSD still might fall to the measured move target, whether or not there is a rally first.

The EURUSD daily chart fell below the April 25 low. That was the bottom of the most recent strong leg up and the bottom of the trading range that began on April 1. The broad bull channel since early March is no longer making higher lows. The channel has evolved into a trading range. If the selling continues, it could become a bear trend, especially after a wedge top on the weekly chart 2 weeks ago.

Today is a Friday. The stronger the bears are today, the more likely the EURUSD will test higher lows on the daily chart. The next one is the March 11 low of 1.0820. If there is a bull reversal today or early next week, the bulls will the try to continue the 2 month trading range.

The selloff on the daily chart is not extremely strong. This increases the chances of another week or two of sideways trading. The selloff from the April high has been strong enough so that the 1st 3 – 5 day reversal up will probably be sold, and followed by a test of the bottom of the current bear leg. It is too early to know if that low was yesterday’s low or if it will be lower. However, since the breakout below the April 25 low so far has not been especially big, the odds of a bounce within a few days are about 50%.

There is an Expanding Triangle on the daily chart with the April 14 and 25 lows. The channel down from the May 3 was tight. The 1st reversal up will probably be sold and the bulls will probably need at least a micro double bottom if they are to reverse yesterday’s breakout. Most likely, the April trading range will continue for at least another week or two. The bulls might get a rally that goes up to about 50% of the May selloff. If so, the bears will try to create a Head and Shoulders top. The bulls hope that the Expanding triangle bottom will result in a rally above the May high. The odds are that the best the bulls will get over the next couple of weeks is a bounce in a trading range. Since the selloff has not been strong and the breakout yesterday was not strong, it is most likely that the trading range will continue for at least a couple more weeks.

The EURUSD Forex market traded in a 15 pip range overnight. That is even too small for most scalpers to make a profit. Traders expect a bounce. They are deciding whether the bottom is in or whether there will be a little more down before the bounce comes. The 1st target for the bulls is the most recent lower high, which is the May 17 high around 1.1350.

The Emini rallied to for the 1st half of the day and then traded down to the open of the week late in the day.