The Emini gapped down to the 15 minute moving average and entered a tight trading range. This is a 20 gap bar buy setup on the 15 minute chart after Friday’s strong bull trend, and that will tend to limit the downside. The big gap down will tend to limit the upside. Big Up Friday, Big Gap down today, so big confusion, and a trading range is likely for the next hour or two.

Although the Emini is Always In Short, limit orders bulls have been making money. This selloff is probably a bear leg in a trading range, which means that a bull swing will probably follow. Bulls will look to buy either a clear bottom or a strong reversal up. Bear will continue to sell bounces until then, but the odds of a bear trend day after Friday’s big bull breakout and today’s weak selloff are small. A trading range is likely for at least a couple of hours.

price action in the Emini on Friday was bullish. It was a small pullback bull trend day on the 5 minute chart, and a bull breakout above a bear flag on the daily chart. A small pullback bull trend is unsustainable and therefore it is a type of buy climax. There is a 50% chance of follow-through buying in the 1st 2 hours, and a 75% chance of at least 2 hours and 2 legs of sideways to down trading that begins within the 1st 2 hours.

On the daily chart, a strong bull breakout above a bear flag is a low probability event. This results in bears trapped into shorts and bulls trapped out of longs. Both will buy the 1st pullback, so there is a 75% chance of at least a small second leg up after the 1st pullback.

The reversal on the weekly chart follows 2 extremely big bear bars closing on their lows and then a weak buy signal bar (a big doji). There is a 75% chance that there will be sellers above the buy signal bar. This means that the odds are that the rally will fail within 2 – 5 bars (weeks) and it will be followed by a test down. This is a bear rally on the weekly and daily chars. If it continues relentlessly, or if it tests back down and forms a major trend reversal, then the bulls will again gain control. Until then, bulls will be taking fast money profits, expecting it to fail, and bears will sell every strong 2 – 5 day rally, confident of at least a fast money profit.

The rally is close to a 50% pullback of the January selloff, and it is near the other resistance levels that I mentioned over the weekend. The highest resistance levels are the 2,000 round number and the December 29 lower high. The rally more likely will fail around where it is now and the December 14 bottom of the 3 month trading range. If it does, it would create a nested head and shoulders top. On the daily chart, the left shoulder is the September high.

With 30 minutes to go before the NYSE open, the Globex is down about 14 points. This would be a breakout test of the January 27 top of the bear flag at 1910.00. At least a small 2nd leg up is likely, so this support is a logical place for that leg to begin.

Less likely, Friday’s bull breakout will fail, and the bear trend will resume. Since the January selloff was so strong, the odds are that its low will be tested within a month or so, and it is possible that the trend resumption down can come without a 2nd leg up first. Although that is unlikely, those who trade the markets for a living will not be in denial if it does. They will sell.

Likewise, even though there us a 75% chance of 2 hours of sideways to down trading beginning in the 1st 2 hours, there is a 25% chance that the rally will just go up all day. Traders learning how to trade the markets need to trade what is happening, not what was likely to happen.

I am always amused to hear experts on TV confidently say that the dollar is strong and the EURUSD will fall when the charts are not saying that at all. Price is truth, and the truth is that the EURUSD has been in a tight trading range for 2 months. The price action is telling everyone that the EURUSD is completely neutral on the daily chart. It is in breakout mode. There is a 50% chance of a bull breakout and a swing up, and a 50% chance of a bear breakout and a swing down. It is foolish to claim otherwise.

If it were true that the EURUSD was going to sell off, why would anyone buy it with enough volume to prevent it from selling off when they know they could wait and buy it cheaper? If it is going to sell off, why are the bears not aggressively taking this brief opportunity to sell at a high price? It just does not make sense to claim that these institutional traders who ARE the market do not know what they are doing. It makes more sense to claim that the pundits on TV do not understand what a candlestick chart pattern means.

As big as Friday’s selloff in the EURUSD was, it formed another higher low in the January triangle, which is the 2nd half of the 2 month trading range. The NYSE opens in 30 minutes. The EURUSD has rallied over the past 20 hours or so, and it is back to the middle of the trading range. It is also testing the breakout point below the January 28 low, and the very flat daily moving average. The rally has been in a tight bull channel, but on the 60 minute chart, which means it is climactic. This means that there is a 75% chance of at least a couple of hours of sideways to down trading today. There is only about a 25% chance that the rally continues all day today and trades up to the top of Friday’s 60 minute sell climax.

While it is possible that today will be a bear trend day, when a bull channel is tight, the market usually has to transition into a trading range before it will reverse down. The odds are that the down side will be limited. With the buy climax limiting the upside and the tight bull channel limiting the downside, today will probably be mostly within a trading range on the 5 minute chart, just like it is on the daily chart.

The rally is big enough so that online day traders might be able to scalp for 20 pips instead of the 10 pips that they had to take for the past couple of weeks. Those trading the 60 minute chart can still scalp for 30 – 50 pips while they wait for a breakout of the 2 month trading range. 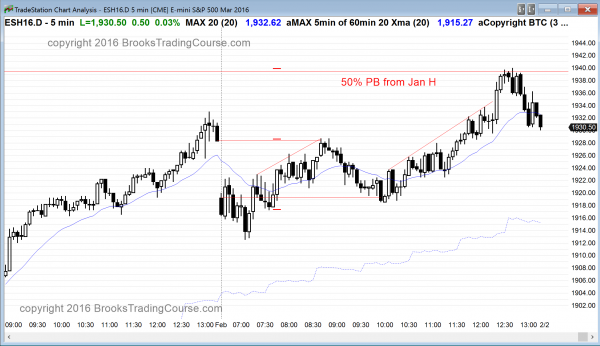 After a wedge bottom that formed an opening reversal at the 15 minute moving average (not shown), the day became a trading range day until the final hour. It then rallied to a 50% pullback of the January selloff.

For most of the day, today was a trading range day after Friday’s strong bull trend day. In the final hour, the bulls got a strong breakout and a test of the 50% pullback level from the January selloff. The 2 day rally has been strong enough so that the 1st reversal down will probably be bought. The Emini is likely to trade sideways to up over the next few days.