Trading range price action began with the 1st bar today. While it is still possible for the bulls to get follow-through buying at any point, there is a 75% chance of at least 2 hours of sideways to down trading beginning within the 1st 2 hours. The 2 or more hours of sideways to down trading might have already begun.
Because yesterday was so strong, there is an increased chance of a rally at the end of the day. The Emini might channel up or down at any point, but because a trading range is likely and the day began with trading range price action, any trend up or down will probably be followed by an opposite swing because a trading range has both at least one leg up and one leg down.
So far, the day has been a limit order market. If there is a strong breakout up or down, traders will swing at least part of their position.

As I mentioned several times over the past few days, two things were likely to happen. First, the sell signal on the daily chart that triggered on Friday was probably going to fail. Second, the buy signal on the monthly chart would probably trigger by March going above the February high, which happened yesterday. Because the bull breakout was so strong, the odds favor at least a small second leg up after the 1st pullback. This means that if a day trades below the low of the prior day, the bear reversal will probably be bought and there will be at least one more day up.

I also said one other thing about the monthly buy signal. As long as the daily chart continues to make lower highs and lows, the odds still favor a break below the bottom of the 2 year trading range before there is a break above it. The odds were 60% in favor of the bears. However, with a strong breakout, like yesterday, the odds for the bears are no longer 60%. As long as the Emini does not get above the July all-time high, the odds are still greater than 50%.

The Emini is now testing the November/December double bottom around 2000. The bulls want to break strongly above it. If they can, the next resistance would be the top of that trading range at around 2100, which is just below the all-time high.

The earliest that the top of this rally is likely to come is 2 days (Friday) from now, but there is no sign yet that the bears will be able to turn this down so soon. If this rally is simply a buy vacuum test of resistance, this rally might be a bull trap. The bears will probably need at least a micro double top. There would probably be a pullback. The earliest that this could happen would be tomorrow. The bears need to trade below the low of the prior day, and it is very unlikely that today will trade below yesterday’s low. That means the bears might be able to get their pullback tomorrow by trading below today’s low. Next, one more leg up is likely, which can be as short as a single day. If that rally fails and becomes a reversal day, then there would be a micro double top, and the day would be a sell signal bar and a possible top. It is possible that yesterday could simply be the top, but when a breakout is as strong as yesterday was, the odds are that there are trapped bears who scaled in yesterday, and are desperate for any pullback that will let them buy back their shorts with a smaller loss. That buying results in the 2nd leg up.

Yesterday was a huge buy climax. There is therefore a 50% chance of follow-through buying in the 1st 2 hours today. There is also a 75% chance of at least a 2 hour sideways to down move beginning by the end of the 2nd hour. The strong breakout that ended at 9:10 yesterday was followed by a tight trading range that lasted about an hour. The rally then resumed and had 3 more new highs in a tight bull channel. A bull channel is a bear flag. There is a 75% chance that there will be a bear breakout and then a trading range. Support is the bottom of the channel, which is around 1965. However, the two higher higher lows are also support, and the trading range bottom might be at those higher levels.

Because a trading range is the single most certain event today, online day traders will look to buy pullbacks and sell rallies. Their 1st shorts will probably be with limit orders above prior highs. Bottoms and tops of trading ranges are never certain. Many traders use wide stops and scale in. Because once the Emini is in a trading range the legs are likely to not go very far, traders tend to scalp more.

There is a 25% chance that today will continue up all day in a strong bull trend. If it happens, those learning how to trade cannot be in denial. They have to look to get long. They probably should trade small because they will probably need a wide stop.

There is also about a 25% chance that today will be a strong bear trend day. The bears need to see a strong bear breakout with follow-through before they will be willing to believe that they have taken control.

The EURUSD has been in a tight bear channel for 15 days. This is unsustainable and therefore climactic, but climaxes can go a long way before they transition into a trading range. While it is possible that the selling continues the the January bottom of the trading range around 10710 without a pullback, it is more likely that it will begin to go sideways for at least several day first after so many days down. The February 6 high went only 1 pip above the February 19 low.

This is a type of gap. When there is any overlap, the gap is actually closed. However, when the overlap is tiny like this, I call this a negative gap, and it is almost as reliable as a gap that stays open. The market has fallen for 4 days since then. The bears are hoping that the gap is a measuring gap. A measured move down from the February 11 top of the bear leg project to around 1.0760, which is just below the January 21 higher low and just above the January 5 bottom of the 2 month trading range.

The EURUSD is still in a trading range. When there are 2 support levels close to one another at the bottom of the range, a market often reverses up after falling below one, but not the other. If that were to happen, the bottom would be around the measured move target.

Clearly the selloff has been strong and there is no bottom yet. However, it is climactic and it is getting close to support about 80 pips below. It can begin to stabilize any day now. For example, it might enter a tight trading range over the next several days. If it then has a bear breakout, the tight trading range might then be the final bear flag of the selloff, and the bear breakout might then reverse up from the measured move target.

The 240 minute chart has been slightly down for the past 2 days, but mostly in a tight trading range. This might be the start of that potential final bear flag. Since the channel down is tight and has lasted a long time (about 100 bars), a sharp reversal up can come at any time. However, because the channel is tight, the reversal up will probably be minor and become a bull leg within a bear flag. The bulls will probably need a Major Trend Reversal before they can get a 200 pip bounce that will test the February 22 gap (the February 26 high).

The 5 minute chart has been in a 50 pip trading range for 24 hours. This means that day traders are buying low, selling high, and scalping for 10 – 20 pips. Many are entering with limit orders, buying below prior lows in the bottom of the range and selling above prior highs in the top 3rd of the range. Some are using wide stops and scaling in.

If there is a strong breakout up or down, they will swing trade. Without that breakout, today will probably continue as a limit order scalper’s market. 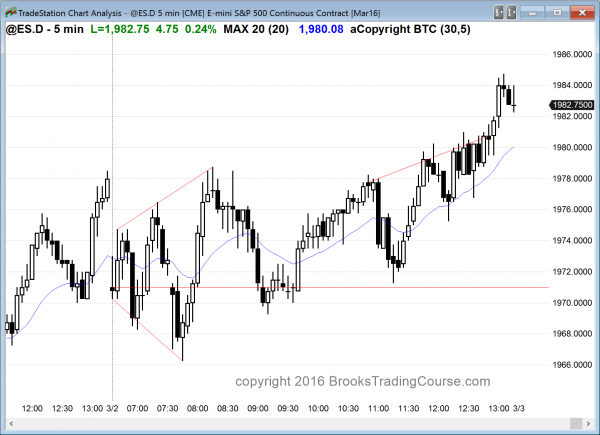 After reversing up from an early expanding triangle, the Emini was in a trading range and broad bull channel.

The bears failed to reverse yesterday’s rally, but were able to achieve their minimum goal of at least 2 hours of sideways to down trading, starting within the 1st 2 hours. The bulls are hoping for follow-through buying tomorrow. However, yesterday was a big buy climax, and the Emini has been in a trading range for a year. This probably will limit the buying tomorrow. The odds are that the Emini will soon have a day or two pullback before trying for the targets above (the most important nearby one is the bottom of the October to December trading range). Traders were more aggressively selling new highs today, and that is a sign that the rally might be transitioning into a big trading range.
Yesterday’s bull breakout was strong enough so that there will probably be buyers below today’s low for at least one more push up.