The Emini opened with a big gap up above the 60 minute moving average and testing the top of yesterday’s bear channel. It then entered a tight trading range. This big gap up after yesterday’s big selloff creates a Big Down, Big Up, Big Confusion pattern and it increases the chances of an early trading range. This will give online day traders a chance to learn how to trade a sell climax in a trading range. The bulls hope that the gap up is the start of the 2nd leg up on the daily chart, but they need consecutive big bull bars to convince traders that a swing up has begun. The bears also need consecutive big bear trend bars to convince traders that the gap up will fail.

Until there is clarity, both will mostly enter with limit orders and scalp, and many will scale in. Most trader should wait for clarity because it is easier to make money when you know that the probability is higher for one direction. However, it usually requires a wider stop. Higher risk is the usual price that a trader pays for higher probability.

This trading range open in the middle of a 5 day trading range increases the chances of a lot of trading range price action today. Yesterday’s big range and today’s big gap make it likely that there will be both a swing up and a swing own. The Emini has not yet decided which will come first, but in general, if there is going to be a trading range, the odds favor down whenever the market is up

Pre-Open Market Analysis
S&P 500 Emini: Learn how to trade a sell climax in a trading range

I have been saying for the past several days that a 2 legged sideways to up correction was likely on the 60 minute chart because of its wedge bottom, and on the daily chart because of its parabolic sell climax down to support. Yesterday selloff after the FOMC report makes it likely that the 1st leg up has ended and the pullback before the start of the 2nd leg has begun. The January 19 and 22 highs were the 1st 2 pushes up in the wedge bear flag that triggered yesterday.

That wedge top probably will have a couple of legs down on the 60 minute chart. Once that pullback ends, the 2nd leg sideways to up from the wedge bottom (a bigger pattern) will probably begin. I have said that the January selloff was so extreme that the Emini would probably enter a trading range that will last 2 – 4 weeks, and that is still likely.

Less likely, the bear trend is so strong that it will resume after only a single leg up from the sell climax low. If so, yesterday’s selloff will be the breakout of a double top bear flag. Some computers will see January 13 as the 1st top. Others will use January 19. All computers see the January low as the neck line of the double top. The bears want a breakout below the neck line and then a measured move down, which would be around 100 points below the January low.

Again, as I said, it is more likely that the leg down that began yesterday will be a bear leg in a trading range and that it will be followed by at least one more test up. However, if the lower probability event (bear trend resumption) unfolds, traders who trade the markets for a living will sell. They will not hesitate, thinking that the selloff should not happen before there is a 2nd leg up. Traders learning how to trade the markets must learn to trade what is now in front of them. They must avoid being paralyzed by what was more likely 1 day or even 1 second earlier. Trade what is there, not what you think should be there.

Yesterday ended with a spike and a parabolic channel sell climax. It was the 4th day in a tight trading range and the 8th day in a bigger trading range. When the Emini is in a trading range, it usually has strong legs up and down, and they usually reverse abruptly. Since it is more likely that the daily chart is in a trading range, it is more likely that yesterday’s selloff will end up as one of those sharp tests down. The selloff was strong enough on the 60 minute chart to make it likely that the 1st reversal up will be sold before the 2nd leg up from last week’s low begins. Since the pattern is small (a tight trading range), the legs up and down can last only a bar or two.

If there is a 2nd leg down on the 60 minute chart over the next few days, it will probably set up a higher low and be followed by a test back up on the daily chart as that trading range continues to unfold. During this process, traders will BLSHS Buy Low, Sell High, Scalp. They know that the odds are that breakouts will fail at least for several more days, so they will take quick profits. This style of trading feeds into the process and makes more of a trading range likely.

Whenever there is a big sell climax that lasts 20 or more bars at the end of the day, there is a 50% chance of follow-through selling in the 1st 2 hours, and a 75% chance of a 2 hour, 2 legged sideways to up correction that also will begin in the 1st 2 hours. If there is no follow-through selling, the trading range can begin on the open. The hour long rally at the end of yesterday might be the start of the trading range. Bears see it as a wedge bear flag and will look for a bear breakout and follow-through selling today. Bulls will try for a bull breakout above the bear flag and then a measured move up. Day traders need to be ready for either, but they know that the odds of a higher low on the daily chart are greater than those of bear trend resumption.

The Emini is up 2 points with an hour to go before the day session begins. It was in a 30 point broad trading range over night.Even though it was in a trading range in the Globex session and an early trading range is likely today, the swing down after the FOMC report and the broad Globex range mean that there will probably be at least one good swing trade up or down today. Yesterday’s sell climax make a trading range likely, which would have at least 2 swings.

Yesterday’s rally after the FOMC report was not enough to create a breakout from the 3 week tight trading range. The 4 day rally on the 60 minute chart has a lot of overlapping bars, prominent tails, and many reversals, and it lacks consecutive big bull trend bars. This means that it is more likely a bull leg in the tight trading range than the start of a bull trend.

Since this leg up has lasted more than 100 bars on the 60 minute chart and it is within a trading range, it will probably soon trade back down and expand the trading range. This means that day traders will view the bull channel as a bear flag, and they correctly believe that the odds are that there will be a bear breakout and test down soon. Since the range over the past month is small, most traders are taking 20 – 50 pips profit on their day trades on the 60 minute chart.

As long as the range is as tight as it has been, most day traders should be scalping for 20 – 50 pips on the 60 minute chart. Most cannot make decisions and place orders fast enough on the 5 minute chart. Day traders who can read the 5 minute chart quickly will enter with limit orders, scale in, and use wide stops can continue to take many trades every day. This is too difficult for most traders. They have a better chance of a profit if they patiently wait for stop entries, buying above a good buy signal bar near the bottom of the range or channel, and selling below a good sell signal bar near the top. Alternatively, they can enter strong breakouts for quick scalps, knowing that the moves up and down will be limited until there is a strong, clear breakout of the tight trading range. 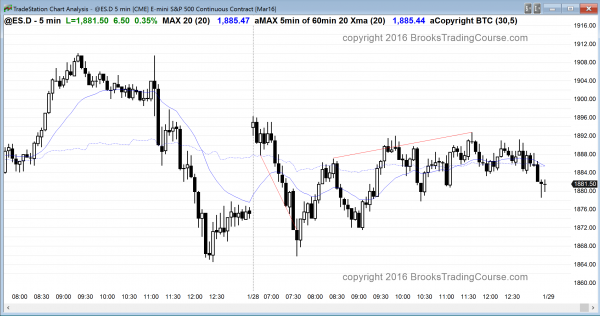 I left after 3 hours today, but will be home next week. The Emini had a big gap up after yesterday’s sell climax, and then sold off to test yesterday’s low. The Big Down, Big Up pattern led to a trading range, as it usually does.

Nothing has changed. The daily chart will probably have a 2nd leg up after the pullback that began yesterday is complete. While it is possible that it ended today and the 2nd leg up has begun, it is more likely that the Emini will trade sideways to down and form a more convincing pullback first.