The Emini began with a trend from the open bear trend in an overbought market. The sell signal bar was the 1st bar of the day and it had a tail. There was a pair of bull bars early on. Yesterday had a lot of trading range price action. This open so far is a trading range open, even thought the Emini is overbought and likely to sell off for 20 points or so within the next couple of days. Traders are trying to decide if the top is in or if a new high is needed first. Bears will begin to sell new highs and bulls will sell them as well to take profits. The 60 minute buy climax will probably reverse down for a day or two.

Even though the Emini is Always In Short, the initial selloff was minor and a trading range is more likely. The bears need a better top, like a major trend reversal, or a strong bear breakout before traders conclude that the 60 minute chart’s pullback has begun. The bulls hope for reversal up, but the odds are against a bull trend day, given the 60 minute wedge top. The odds are that today will be either a trading range day or a bear trend day. At the moment, is it still in a trading range, but yesterday’s bull channel is a bear flag, and the odds favor a selloff soon.

The Emini broke strongly above February’s high and above the top of an expanding triangle top on the daily chart. In general, when a market breaks above a top, where there is an obvious stop for the bears, there is a 50% chance of a swing up and a 50% chance that the breakout will fail, and the Emini will try to turn down again. When the breakout is especially big, like this one, the odds are slightly higher for the measured move up, but not quite 60%.

With this in mind, traders need to be ready for a reversal or at least a pullback lasting at least a couple of days. If it is going to happen, it is most likely to begin today or tomorrow. At a minimum, the Emini should stop going up for a few days. Less likely, this rally will be like the one in October and relentlessly move up to about a measured move.

The 60 minute chart is at the top of a wedge channel. There is a 25% chance of a successful bull breakout and a 75% chance of a reversal down to the bull trend line, which is about 20 points below. It can get there by going sideways or down. Once there, the bears will try to drive the Emini all of the way to the bottom of the wedge, which was the February 24 low of 1886.75.

It is too early to know if they will be successful. Since the rally has been so strong, it is likely climactic. This means that there is at least a 50% chance of a TBTL Ten Bar Two leg correction on the highest time frame that shows the wedge top buy climax. That is the 60 minute chart. A 10 bar correction is a day and a half, and that is the minimum goal for the bears.

The EURUSD is oversold on the daily and 60 minute chart, and near the bottom of the December/January trading range. The odds are that it will bounce soon. There is still room (70 pips) below yesterday’s low to the measured move target based on the gap between the February 19 low and the February 26 high. The EURUSD could easily fall to the target and even below the trading range low.

Because it is so oversold, it is more likely that it will trade sideways to up over the next several days. Whenever there is a sell climax relatively late in a bear leg, the target for the bulls is the top of the final bear breakout. This is the February 26 high or around 1.1070, which is about 250 pips above the current price. Since the EURUSD is in a trading range and the selloff has been strong, if it is going to reach the target before breaking below the bottom of the range (the January 5 low, around 1.0700), the rally will probably be weak. That means that it will have pullbacks after every 1 – 3 days up.

When a channel is tight, like the one on the daily chart over the past 3 weeks, the first reversal up is usually minor. A minor reversal up is a bull leg in what will become a trading range, rather than the start of a bull trend. This means that even if the rally continues for 10 bars (days), it will probably be followed by a test back down. A trading range is therefore likely over the next 2 – 3 weeks.

The rally that began yesterday had a 2nd leg up overnight. Neither leg was particularly big, which is consistent with the likelihood that any rally will be a leg within a trading range over the next few weeks. Has the move up to the 1.1070 top of the sell climax begun? It is too early to know. However, after a sell climax down to a support area, the odds of much more down are about 40%. The EURUSD will probably be sideways to up for at least a week or two, and the rally will probably be weak, constantly looking like it is about to reverse back down. Bulls will buy pullbacks on the 60 minute chart and put their stop below the most recent higher low. 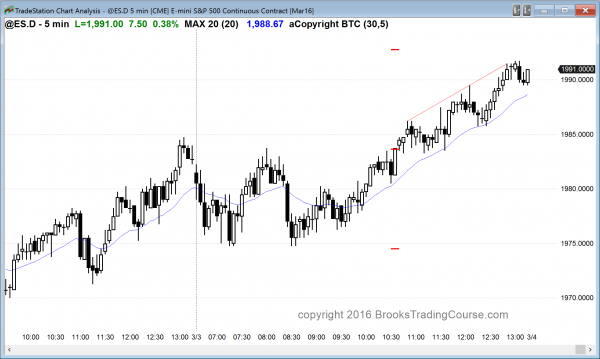 The Emini was in a triangle for the 1st half of the day and then entered a small pullback bull trend.

Although the Emini was in a small pullback bull trend for the final 4 hours, bears were able to make money by selling above highs, scaling in and scalping. This is much more common in a trend that ends up as a leg within a trading range. Also, the 60 minute chart has a nested wedge top. The odds favor a bear breakout below the bull channel and TBTL sideways to down on the 60 minute chart. However, there might be a bull breakout first, and then a reversal down. This is especially with tomorrow’s unemployment report, which can lead to a big move.

The important magnet above is the 2000 round number. There is a leg 1 – leg 2 target from the 60 minute spike and bull trend that is around 2005. Other than than, there is no significant resistance until the January 5 gap at around 2015.

The 60 minute and daily charts are overbought. The odds favor a couple of days sideways to down. The pullback might begin with tomorrow’s report. The odds are against more than another day or two up without the pullback. However, if the Emini takes the low probability path of a continued rally in a buy climax, traders cannot deny it and must look to buy.