Thursday was a buy climax and today opened with a selloff from above Thursday’s high, even though Thursday was a buy signal bar on the daily chart. The odds are that the Emini will enter a trading range for the 1st 2 hours today, and then decide between trend resumption up and trend reversal down.

While an opening reversal up and an early low of the day is possible, the selloff was strong enough to make follow-through buying unlikely. It is more likely that the 2 hour trading range has begun. It is possible that today can be a big bear trend day, but with Thursday’s rally being in such a tight bull channel, it is more likely that this initial selloff will be limited and the Emini will soon enter a trading range. It is still Always In Short, but the odds favor mostly sideways for the next hour or two.

The Emini had been in a channel of a Spike and Channel rally on the daily chart that began on February 11. It broke below the channel last week. Bull channels are bear flags, and there is a 75% chance of a bear breakout and then a conversion into a trading range.

This one might as well. Also, it might fill in the thin area on the chart between the 2 upper and 2 lower ranges. Finally, March-April are the strongest consecutive months of the year, and everyone knows the adage, “Sell in May and go away.” This might apply this year. If the Emini enters a small trading range, which might have one or two more minor new highs, and then begins to fill in the gap down to around February 1 high around 1930, the sideways price action could last several months.

The daily and weekly charts would then be in large triangles. The probability for the bull breakout would then be back up to 50% (the bear breakout still has higher probability because of the 9 month bear channel of lower highs and lows, and the extreme buy climax on the monthly chart).

The Globex session was quiet. The Emini is up about 5 points. Friday was a pullback in a bull trend, and it closed on its high. It is a buy signal bar. However, since the odds favor the transition into a trading range soon, there might be sellers above Friday’s high, and there are probably sellers above last week’s high. The bulls want a strong breakout above the 2 day bull flag. The selloff on the 60 minute chart broke below the bull channel, but Friday had 7 consecutive bull trend bars, and 6 were moving average gap bars (gap between the high and the moving average). Gap bars in a bull trend usually lead to the final rally before there is an attempt at forming a major trend reversal. It can come from a lower or higher high, or a double top.

The price action on the 60 minute and daily charts are unclear. The bears are finally showing evidence of strength. An unclear chart means that the probability of a big move is now less. Traders begin to buy low, sell high, and take quick profits, confident that any move will be limited. The result is the formation of a trading range, which is likely over the next month.

Although today is the entry bar for the breakout above the bull flag on the daily chart, and the gap up, if there is one, could lead to a strong rally, it is more likely that the bulls will be disappointed. When the market begins to enter a trading range, setups have lower probability, and both bulls and bears get disappointed by the lack of follow-through. Traders will begin to bet against patterns working, and there might be more sellers than buyer above Friday’s buy signal bar.

Even though today will probably be quiet, it is still an entry bar on the daily chart, and it could be a big bull trend day. It could also be a big bear trend day, but neither is likely. If the Emini has a strong breakout up or down, those who trade the markets for a living will swing trade.

Because traders sense that something has changed, they will be quicker to take profits. This makes any early trend more likely to enter a trading range after a couple of hours than to trend all day. When a trading range is likely on the higher time frames, the 5 minute chart usually has a lot of trading range price action. This increases the chances of a trading range for the 1st hour or two on the open.

The EURUSD daily chart traded down for 5 days after a wedge rally to a lower high in a yearlong trading range. The bear channel on the 60 minute chart was tight, but it was not steep. It was therefore not a strong bear trend. A bear channel is a bull flag, and the bulls began to break above the bull flag over the past 2 days by simply going sideways. There was a 30 pip rally over the past hour, which is a breakout above the 2 day tight range, but most trading range breakouts fail.

The odds are that this one will fail to go very far. Instead, it more likely will simply make the trading range a little taller. The 60 minute bear trend held above the bottom of the March 16 bull breakout. This means that it is still a bull flag on the daily and 60 minute charts. However, whenever a big down move follows a big up move, there is big confusion. Confusion is a hallmark of a trading range, and that is usually what follows.

The odds are that the 60 minute and daily charts will be in a trading range this week. If that is the case, traders should expect disappointing follow-through after breakouts up and down. Traders are confident that moves will not go far so they are quick to take profits and to bet against the follow-through. They buy low, sell high, and take quick profits. The result is a trading range. The range has been about 45 pips for 3 days. That means that traders are refusing to hold onto positions. They are scalping.

The rally of the past hour has been strong enough to make the odds likely that the 1st pullback will be bought and there will probably be at least one more leg up. However, it is not strong enough yet for traders to believe that the 2nd leg up will double the height of this 1st leg. It will be easier to make money buying pullbacks that selling rallies over the next hour or two. However, if the EURUSD 5 minute chart begins to enter a trading range and if pullbacks begin to over lap prior highs, bears will begin to sell new highs and scale in for scalps. 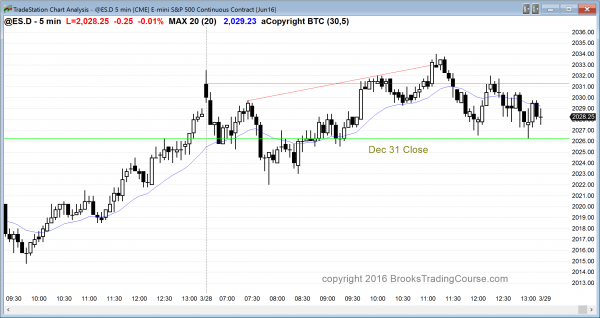 The Emini went sideways for the 1st 3 hours, and then had a bull breakout. After a Low 5 wedge top, it reversed down, but closed around the open of the day.

The Emini is probably at the start of a month-long trading range. Today was the entry bar on the daily chart for a 2 day bull flag, but sideways is more likely than up.

The 60 minute chart had many moving average gap bars last week, which is a sign that the bears are getting stronger. It increases the chances that the rally will result in a 60 minute major trend reversal attempt. This also limits the upside over the next couple of days.