Today is an FOMC report day. Day traders should wait for at least 2 closes after the report before entering. The initial move reverses about half of the time.

During the 1st 5 bars, bulls made money with limit orders twice, as did the bears. This is a limit order market and it is within a 3 day tight trading range. This increases the chances of a lot of trading range price action today. Day traders will mostly scalp until there is a strong breakout up or down, or a buy signal bar near the bottom or a sell signal bar near the top.

The bears had a big bear breakout, but the follow-through bar had a bull body, and the open had trading range price action, as did yesterday. The market will try ot get neutral before the FOMC report. The odds are that this selloff will be followed by a swing up before the report, but the Emini is currently Always In Short with no evidence of a bottom yet. Traders will probably sell the first bounce.

With about 90 minutes to go before the NYSE opens, the Emini is down about 10 points. The bulls created a higher low major trend reversal (and a head and shoulders bottom, and a failed double top bear flag) on the 60 minute chart. A bottom in a strong bear trend has about a 40% chance of leading to a swing up for a measured move, and a 60% chance of either a trading range or a failed bull breakout and then a reversal down. If there is a failed bull breakout and reversal down, it would come from a type of wedge bear flag since it would have 3 pushes up. The first two pushes are the neckline of the head and shoulders bottom (the Jan 19 high after the left shoulder, and yesterday’s high, which followed the head).

Since the Emini was so extremely oversold and it reversed up from major support, and there are reasonable targets above (the top of the wedge bear channel and the daily moving average are both above 1940), the context here is strong enough so that the bulls have better than a 40% chance of a swing up (but not a 50% chance yet).

A head and shoulders bottom always is a a trading range, and a major trend reversal is a double bottom and therefore also a trading range. Trading ranges resist break outs. This means that the most likely of the 3 outcomes is for the trading range to grow (instead of having a successful bull or bear breakout).

Since the dominant feature on any higher time frame chart is the sell climax down to support on the daily chart, it has the most influence over the next several days. A wedge bottom in a sell climax usually has TBTL as its minimum reasonable goal. The bounce so far has been 5 days.

This is also the last few trading days of the month. I said last week that another reason for a rally into the end of January was that January was down about 10% at that point. That is extremely unusual, and with 2 weeks left, there was more than enough time for the month to end up as a more typical month (meaning it would be down significantly less than 10%).

Although it is possible that the 1st of the 2 or more sideways to up legs ended on Friday, it is more likely that the Emini is still in its 1st leg up. Since it is coming from a tight bear channel, the reversal up is more likely minor, which means that the odds favor a test down within the next couple of weeks. A minor reversal means that it is much more likely to end up as a bull leg in a trading range than the start of a bull trend (a major reversal). There is no clear top yet and good targets above. This means that the odds favor at least a little more up, and possibly a rally to the targets above, before the Emini tests last weeks low. If it tests last weeks low, the test could then form a major trend reversal up. The odds of a swing up on the daily chart at that point would be about 40%, just like they are now with the 60 minute major trend reversal that began with Monday’s low.

The EURUSD continued its 3 day rally overnight. The bulls see a head and shoulders bottom on the daily chart. The bears see a trading range in a bear trend, and therefore a bear flag. They are both right. Every trading range has both a reasonable bottom and top, and the probability of a successful bull breakout is about the same as that for a bear breakout. This is a breakout mode situation. Until there is a breakout, traders on the daily chart will continue to buy low, sell high, and take quick profits. Since the trading range is sideways and has had 3 pushes up or down (there are 3 clear pushes up), it is also a triangle, which is a tight trading range. Knowing that does not help traders. They will scalp within a tight trading range, no matter what they call it.

The 60 minute chart is in the middle of the range, which is where bulls begin to take profits and bears begin to short. The top of the range is around 1.0980, which is about 30 pips above the current price, and the top of a range is always a magnet.

The 60 minute bulls have a 2 hour breakout, with about an hour before the NYSE opens. The bars are not very big, and the context is not good for swing traders, but a measured move up is around the top of the yearlong range. This means that the upside is probably limited to a test of the top of the range, and then the odds favor another test down. Until there is a strong breakout up or down, traders will be hesitant to swing trade. The context is good for a rally today, but the breakout so far is weak and it is more likely going to become just another leg in the trading range. This means that traders will continue to scalp, even though the 5 minute trend is up. They will bull pullbacks until there is a reversal down, and they will be willing to sell above prior highs for short scalps. 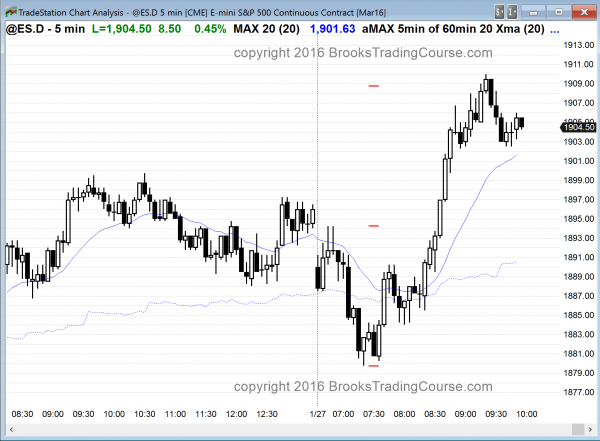 I left before the FOMC report. There was an early higher low major trend reversal that was followed by a strong bull breakout above the 60 minute head and shoulders bottom. The bulls want follow-through on the 11 am report, and the bears want a failed breakout and a reversal down.

The Emini had a strong bull breakout before the FOMC report. Since the reaction to the FOMC report might be big and it will have an effect on tomorrow’s price action, and it can be up, down, or both, I will wait until my pre-market report tomorrow to comment on it.