The Emini gapped up and began with a trend from the open bull trend. It stalled at the 60 minute bear trend line and formed a couple of bear bodies. When there is a big gap up and then a loss of momentum, the odds of a small pullback bull trend drop. The market usually enters a tight trading range, which can last for 1 – 2 hours, and then decides between trend resumption up or trend reversal down.

The Emini is Always In Long, but not strongly bullish. The odds favor sideways for an hour or more. The bears have not yet done enough to create a credible high of the day. They need 3 or more consecutive bear bars closing near their lows. Without that, the best they probably can get is a tight trading range for an hour or two.

When there is a big gap up and the rally stalls, the Emini usually goes mostly sideways until it gets closer to the moving average. The odds favor a resumption up. However, there is still a 40% chance of a reversal down.

Before yesterday’s open, I said that the odds were that yesterday would rally because the Emini was oversold and at support on the daily chart, in a 60 minute sell climax, and needed to get more neutral going into Wednesday’s Fed announcement. I also said that it probably had to rally for about 10 bars and 2 legs on the 60 minute chart because that was the highest time frame that had a sell climax. By the end of yesterday, it rallied for 5 bars and 2 small legs. Although that might be the end of the rally and it might be a bear flag, the probability is for at least another several hours of sideways to up trading today. The bulls would like to reach the middle of the 2 month trading range, which is around 2050, by the 11 a.m. announcement tomorrow.

The bears want yesterday’s rally to be a bear flag. They want a bear breakout today and for the Emini to be as far below the September high as possible. This would increase the chances that the November-December double top on the daily chart will fall another 100 points for a measured move down. The bears have about a 30% chance of success before the report.

Those learning how to trade the markets will assume that if the bulls can then create a bull trend day today, the Emini would end up around the middle of the 2 month trading range going into the report and be more neutral. Those who trade the markets for a living know that the probability of a big move tomorrow is the same for the bulls and the bears. Therefore the Emini will be neutral before the report, no matter what happens before the report.

At the moment, the Globex chart is up about 13 points. If the Emini’s day session opens here, it will gap above yesterday’s high. With Friday’s gap down, that would be a 2 day island bottom at support, which is a bullish candlestick pattern on the daily chart. The bulls want an early low of the day and then a rally. The odds are that there will be follow-through buying for at least the 1st 2 hours. However, since the Emini is in a trading range, and the probability and size of follow-through are less, traders will be open to anything. While the odds favor a rally, the Emini could sell off on the open and close the gap. It could simply go sideways and form a small trading range day. If there is a rally, it might be weak. The first several bars and the 1st hour should foreshadow what to expect for the rest of the day.

The EURUSD had a strong bull breakout last week on the 60 minute chart after a wedge bottom. Since then, it has been in a broad bull channel. However, that bull channel has a nested wedge top. The 3rd push up subdivided into a smaller wedge. This is a sell climax and is usually followed about 10 bars and 2 legs sideways to down. The 240 minute chart is the highest time frame with the pattern, so the 10 bar pullback will probably be on the 240 minute chart. That will probably last up to the Fed announcement tomorrow at 11 a.m. PST.

The EURUSD has sold off from the wedge top over the past 6 hours. The targets for the bears are the higher lows withing the bull channel. The 1st one is around 1.930. The next one is the bottom of the wedge channel at around 1.0800. That is also a 50% retracement for the rally, which increases the chances that the EURUSD will get there within the next week or two.

I wrote last week that the bull reversal on the daily chart covered about a month’s worth of price in just 8 hours. That is a good example of a move that went too far and too fast. The rally created a bull spike and channel pattern on the 60 and 120 minute charts, and that is a buy climax candlestick pattern. A buy climax usually leads to a trading range. The channel up lasted about 5 days. The 1st leg down might also last about 5 days.

Because the rally was so extreme, the pullback might also be extreme in terms of price and time. It could easily retrace most of the rally, and it could take a month or more to do it. Regardless of the size of the pullback, the rally was so exceptionally strong that the odds are that it will have a 2nd leg sideways to up after the pullback. This means that whatever selloff that might come tomorrow or over the next few weeks will probably be bought and the best the bears will probably get is a trading range.

Was last week’s rally from a double bottom the start of a bull trend on the daily chart? The odds are against it. It will more likely be a bull leg in a trading range. The monthly chart is still in a bear trend, despite the double bottom. However, a bear trend often has rallies that last several bars. Several bars on a monthly chart is several months. This means that the reversal could go sideways to up for several months, and the bear trend would still be in effect. It will remain in effect until the bulls create a series of strong bull trend bars on the monthly chart that erase much of the 2014 selloff, and there is no evidence for this yet. 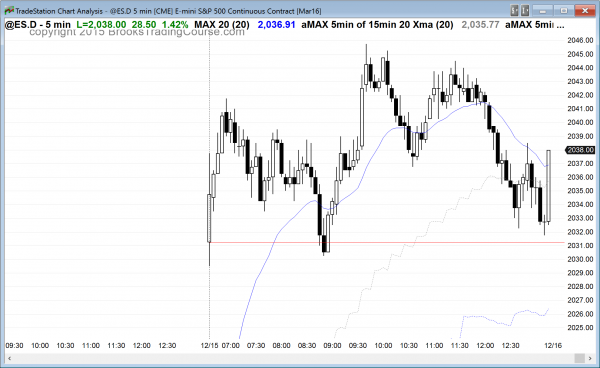 The Emini gapped up and created a 2 day island bottom. The follow-through buying was weak and the day became a trading range day.

No matter what today did and what tomorrow will do before the 11 a.m. report, the market will be neutral going into the FOMC Fed interest rate announcement. The Fed has never gone 9 years without an interest rate increase in my 30 years of trading, and no one knows how many dollars will buy or sell the news. The probability of a big move up or down is 50%, and the probability that the 1st move will reverse is also 50%. Traders should be open to anything before the report and after the report, although a trading range is likely before and a trend is likely after. After the report, the bars might be very big and there might be one or two fast reversals. Traders usually should not enter until after at least 2 bars have closed.