The Emini had a trend from the open bull trend and it broke above the top of the 6 day trading range. The breakout failed and the bears completely reversed the initial rally. At the moment, the Emini is Always In Short. The reversal was strong enough so that the best the bulls can reasonably hope to get over the next hour is a trading range. Bears will sell the 1st rally.

Th Emini has hit the August 17 top of the bear trend for each of the past 6 days, but has been unable to break above it. It has been in a tight trading range, giving day traders a chance to learn how to trade quiet price action. The more bars that get added to the range, the more the rally of 2 weeks ago losses its influence and the more neutral the Emini becomes. The momentum up was strong enough so that the odds are that the Emini will reach the next resistance level of the November high. There is a 50% chance that it will get above that and test the July all-time high. However, there is only a 40% chance that a breakout to a new all-time high will reach 100 points without first having a TBTL Ten Bar Two Leg correction on the monthly chart (about a year), which remains overbought.

The bears see the rally over the past month on the daily chart as a sell signal. It is a lower high, and they are shorting, knowing that there is a 40% chance of a lower high major trend reversal that will lead to a swing down before going above their stop, which is above the November or all-time high. Many bears are waiting to see a strong downside breakout before shorting. At that point, the probability of a swing down on the daily chart would be higher. Traders learning how to trade the markets need to know that anything good for them means that is bad for the other side, and the other side has to get something in return. Bears who wait for a breakout pay for the high probability with a reduced risk/reward (their stop would be farther away). The math is good for shorting now or after the breakout. The math is also good for the bulls buying now or after the breakout. However, the management of either a long or short swing trade is difficult when the Emini is in a tight trading range. Because of that, most bears and bulls who trade the markets for a living continue to scalp (take fast money trades lasting hours to days), waiting for a clear breakout before swing trading.

The Emini is currently up about 6 points in the Globex session, but still below the August 17 bear trend high of 2091.25. Day traders today expect more trading range price action. This means that the odds are that there will be a swing up lasting 2 – 3 hours and a swing down lasting 2 – 3 hours. Traders do not know which will come first. Yesterday, the swing down came first. Even though there were many strong bear trend bars in that selloff, I repeated said in the chat room that the selloff looked more like a bear leg in a trading room than one in a bear trend. This was due to the absence of consecutive big bear trend bars closing on the lows, and the ability of bulls to make repeatedly make profitable scalps with limit orders and scaling in. Traders will watch the initial 2 hour swing up or down to see if both bulls and bears can repeatedly make profitable scalps. If only one side is easily making money, traders will be much more inclined to only trade in that direction and to swing trade, knowing that this type of price action is more common in trend days.

The Emini might be waiting for Friday’s unemployment report before it decides on the direction of its breakout. However, it can breakout at any time in the absence of any news. Until it does, day traders will trade it like a trading range. They will look to buy low, sell high, and scalp, and many will use limit orders, buying below bars in the lower half, selling above bars in the upper half, scaling in, and scalping. This is hard for most traders to do and they should instead look for one or two 4 point swings.

The EURUSD is in a sell climax on the daily chart, but there is still room to the support of the April and March lows. There is a wedge bear channel on the 240 minute chart and it is very tight. This means that it will breakout soon. There is a 25% chance of a bear breakout and an acceleration down to far below the support, which is only about 40 pips below the overnight low.

There is a 75% chance of a breakout above the wedge bottom and then a rally that has about 10 bars and 2 legs. If the bulls get their rally, they will look to take profits around resistance, which is at the November 12 top of the wedge around 1.0820. This is also the bottom of the 7 month trading range. A rally could be the start of a reversal up from a double bottom with the March or April low, but the channel down from the October high was so tight that the first reversal up will probably be sold.

The bulls more likely will need a test of the November low before they are able to get a swing up. This means that the bulls will not hold for a bull trend and will take profits at resistance. This also means that the best the bulls can realistically hope to see over the next moth or two is a trading range. The daily and weekly charts are in a bear trend, and the rally, if the bulls get it, will probably be a bear rally and a bear flag.

There is about a 25% chance that they can create a strong reversal up and a bull trend without a small double bottom first. However, this would probably require a very big rally lasting several days. If traders see that, they will quickly buy for a swing trade up. There is also about a 25% chance of a strong bear breakout below the March lows before a bear rally. If the bears get it, traders will short for a swing down. More likely, the sell climax will lead to a trading range that will last at least a month, and traders will look to buy low, sell high, and be quick to take profits. The trading range rally has not yet begun.

Bulls have been able to consistently make money over the past several weeks by buying new lows and scalping. The wedge is tight and at support, and it has lasted a long time. These factors make a change in the market’s behavior likely to begin within the next week or two. 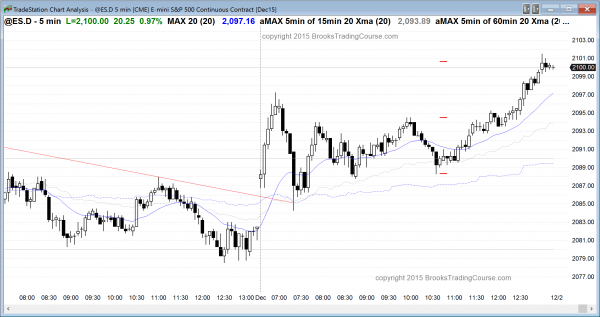 The Emini had a strong rally on the open, and then a strong reversal to a new low of the day. Buyers came back and the Emini rallied, entered a trading range, and then had bull trend resumption at the end of the day.

The Emini broke above its 6 day tight trading range today. The magnets above are the November high and the all-time high. The bulls want follow-through buying tomorrow and a breakout to a new all-time high this week. The final 3 hours were climactic. There is a 50% chance of follow-through buying for the 1st hour or two. Whether or not there is early buying, there is a 75% chance of at least a couple of hours of sideways to down trading that will begin within the 1st hour or two.

The bears want a double top and a reversal down. Momentum and therefore the probability favors the bulls, and the risk reward favors the bears since their stop is much closer. Until there is a breakout, the bears still have about a 50% chance of a double top with the all-time high. They are waiting for a sell setup on the daily chart or for a strong reversal down. Until there is a strong breakout, both the bulls and bears will be quick to take profits. The Emini might wait for Friday’s unemployment report to decide between the bull breakout to a new all-time high and the double top reversal down.