The Emini began with a limit order market just below yesterday’s high and the 60 minute moving average. The bulls want to get above yesterday’s high to trigger the buy signal on the daily chart. The 3 weeks down have created a wedge bull flag. The bears don’t care if the buy signal triggers as long as it fails and the market then reveres down to test yesterday’s low.

For today to be a strong bull trend, the bulls need a strong breakout above the 60 minute moving average. If they get it, they will hold for a swing trade up. The bears are trying to get the bulls to give up. They then want a test of yesterday’s low.

There have been multiple reversals in the 1st 30 minutes and lots of overlapping bars. Yesterday was a trading range. Tomorrow is a big report. This all increases the chances that today will have a lot of trading range price action. There will probably be both a swing up and down. The Emini is deciding which will come first. Day traders have been scalping with limit orders and are waiting for a breakout before they will swing trade. However, a trading range day is likely, which means that the 1st swing will be followed by an opposite swing 2 – 4 hours later.

The Emini has sold off for 3 weeks, but the selling on the 60 minute and daily charts lacked consecutive big bear trend bars, and it is still above the 2026 bottom of the Final Bull Flag on the daily chart.

That is also the April low. Since April broke above the top of the 2 year trading range, if the Emini falls below that low, it will trigger a sell signal on the monthly chart. With the monthly chart so strongly up and with April having a bull body, the odds are that there will be more buyers than sellers below that price. Also, the weekly chart had an 11 bar bull micro channel, which is a sign of extremely eager bulls. Usually a pullback below the channel lasts only 1 – 3 bars before it is bought and the Emini tests the top of the channel (the all-time high). Since this is the 2nd week below the channel, there is a 60% chance that the selling will end either this week or next week.

The selling has been deep enough and has contained enough bars on the daily chart to create a Big U, Big Down pattern. That is a sign of a confused market. A confused market has reasons to buy and to sell, and the result is usually a trading range. A trading range is likely for several more weeks because traders will sell the 1st rally after a pullback from a buy climax. The rally from the February lows on the daily and weekly charts was unsustainable and therefore a buy climax.

It is always possible that the Emini can accelerate down and have a big bear trend day today. That is unlikely because the selloff looks more like a pullback than a bear trend. It lacks the urgency and persistence of a bear trend. Since the selling is likely to end by the end of next week, it can end any day over the next week. This means there might be a big bull trend bar. It would represent traders deciding that the pullback has ended and that the bull trend has resumed. They will look for a test of the April all-time high.

The Globex market rallied strongly and then sold off strongly. It has been in a trading range for a couple of hours, although it is still up 6 points. Most traders will look for a swing up and down today, but they do not know which will come first. If there is going to be a trend day, a bull trend is more likely after a weak selloff that has lasted 3 weeks. That means traders should be ready for a pain trade.

Whenever one thing is more likely, the market sometimes does the opposite. When it does, it can do it relentlessly, creating a lot of pain. The possible pain trade today would be a big bear trend day, which is unlikely. Most likely, today will have a lot of trading range price action, like most of the days over the past several weeks. 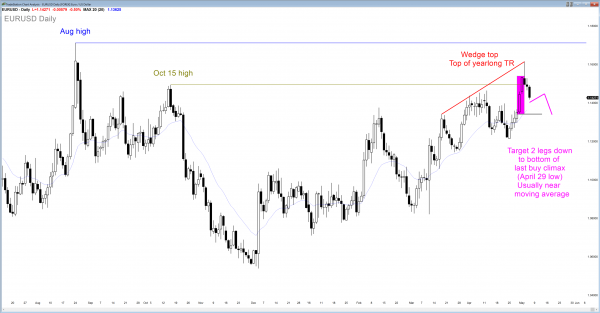 The daily chart of the EURUSD had a 2 day buy climax in a wedge top at the top of a 100+ bar trading range.

The daily chart of the EURUSD has turned down from a wedge top near the high of a yearlong trading range. The reversal down over the past 3 days has been strong enough to make a 2 legged move down likely.

Whenever a Forex chart reverses after a buy climax, the first target is the bottom of the buy climax. Weak bulls put their stops 1 pip below. Strong bulls either get out immediately on the reversal down, which means yesterday, or they use a wide stop, like below the bottom of the entire 3rd leg up, which is around 1.1200.

Tomorrow’s unemployment report could lead to a big move up or down. Today might try to become neutral going into the report. This means that it might have a lot of trading range price action. Also, it is back in the tight trading range of early April, where the EURUSD Forex chart formed 8 consecutive doji bars on the daily chart. This increases the chances of several sideways days again at this price level.

On the 60 minute chart, there have been 2 clear legs down from the buy climax high of 3 days ago. However, there is a buy climax on the daily chart, so it too is likely to have 2 legs down. The 2 legs down on the 60 minute chart might be the end of the 1st leg down on the daily chart. If it is, the odds are that there will be sellers above for a test below the bottom of last weeks 2 strong bull trend days (the final buy climax). A strong 2nd leg down in a possible developing trading range is a possible 2nd leg trap. I gave a webinar yesterday about this, and the video is available for free on my websites.

Whenever there is a wedge top, which is a type of buy climax, there is a 60% chance of 2 legs sideways to down. That is what is likely there. There is about a 40% chance that the bounce from the 1st leg down will go up to test the top of the wedge before there is a 2nd leg down.

The Emini reversed up strongly at 8:30. It then reversed down and fell for a measured move based on the open of the 1st bull bar and the close of the final bull bar in the bull reversal.

The Emini reversed down strongly from above yesterday’s high to just above yesterday’s low. The selloff over the past 3 weeks has not been strong. Since it is weak and it has lasted a long time, the odds are that the bulls will come back soon. This is especially true of the weekly chart bulls who believe that the pullback below the 11 week bull micro channel should end within 2 or 3 weeks.

Because the probability favors a bounce within a week, there is always a possible pain trade. The selloff after today’s reversal up on the 5 minute chart was an example. Since the odds favor a reversal up within a week on the weekly chart, the pain trade would be a bear breakout. When everyone is confident of a rally, and there is instead a bear breakout, everyone is trapped into longs or out of shorts. They have to quickly fix that, and the result can be a bear trend that lasts all day tomorrow.

Day traders should assume that the Emini is now neutral going into tomorrow’s unemployment report. This means that there is about a 50% chance of a successful bull or bear breakout tomorrow. When a market is neutral going into a report, there is also a 50% chance that the initial breakout will fail and reverse. The day trading tip is to go into tomorrow thinking that anything can happen, and then just trade in the direction of the trend if there is a trend. If a trader enters and the market starts to go against him, he should just get out with a loss because tomorrow has the potential to trend. When a market is trending, it can go a long way so traders need to get out of losing positions early.