Despite the early rally, bears were able to make money selling with limit orders. This increases the chances of a trading range, and today will give day traders a chance to learn how to trade the markets below resistance. Nothing has changed from my comments before the open. The bulls might get a 1 – 2 hour rally, but the odds are that there will be at least 2 hours of sideways to down trading starting at any time. Since the daily chart has reached its target of the November 11 high, the bulls might take profits. This also increases the chances of a trading range. The 60 minute chart has 8 consecutive bull bars. This is extreme. The odds are that there will be a bear bar in the 1st hour or two. However, the selloff below the low of the prior bar will probably be limited to a bar or two (2 hours). When a day has a swing down for 2 hours and then a reversal, the odds are that the day will be a trading range day.

At the moment, the Emini reversed down from a small double top above yesterday’s high. Although there is a 20 gap bar buy setup and the bears probably need at least one more consecutive bear bar, the upside is probably limited and the odds are that 2 hours of sideways to down trading has begun.

Pre-Open Market Analysis
S&P 500 Emini: Learn how to trade the markets below resistance

The Emini rallied strongly in a spike and bull trend after yesterday’s 11 a.m. report. The buying was climactic and the rally lasted all day. There is a 50% chance of follow-through buying for the 1st 1 – 2 hours today, and a 75% chance of a transition into a trading range that will have at least 2 legs and last at least 2 hours, beginning by the end of the 2nd hour.

The Emini is up 4 points in the Globex session. If the day session opens here, it will have a small gap up. This will not effect the above probabilities.

The Emini has a 4 day bull wedge channel. The first push up was the final lower high in the selloff that ended on November 13. The top of the channel right now is about 2088, which is around the Globex high and it is a magnet for today. Traders learning how to trade the market should draw the channel line and watch to see if the Emini reverses down from it. If it does and there is reasonable two-sided trading in the rally to the channel, or climactic buying, those who trade the markets for a living will look to sell a reversal down for a swing trade.

The bulls yesterday exceeded their goal of testing above the November 11 high, which was the top of the 3 day sell climax. Bulls usually take profits there and bears will probably scalp. The result is usually a pause. This increases the chances that today will be a trading range day.

The EURUSD is oversold on the daily chart after falling in a series of sell climaxes. It is also at the bottom of a wedge bear channel on the 240 minute chart. The odds favor several days up over the next week. The first target is the November 12 lower high just above 1.0800. The bulls are trying to create a reasonable bottom on the 60 minute or 240 minute charts. The rally from yesterday’s lower low major trend reversal is still in effect, and some bulls are holding onto longs for another 100 pips higher. Bulls who are currently flat are looking to buy above a strong higher low candlestick buy signal bar,

The bears know that the EURUSD is oversold. They also know that it can get much more oversold before there is any pullback. The current bear leg that began on October 15 is 900 pips tall. This means that bears need to risk 900 pips to their stops above that level. Most will not risk that much. Some will either use a tighter stop. Others will begin to take profits. If enough take profits, the result will be a pullback, which is likely soon. The bears will see a 5 – 10 day pullback as a bear flag and expect a new low. If they get their new low, they can then tighten their stops to above the bear flag.

If the bulls can make the pullback grow to 20 or more bars, they will have lowered the probability for the bears to 50%. They will then have a 50% chance of a bull breakout above the developing trading range and then a measured move up.

Although the odds favor a pullback staring within the next few days, at the moment, the odds also favor it not lasting too long before the bear trend resumes down to test the April and March lows. 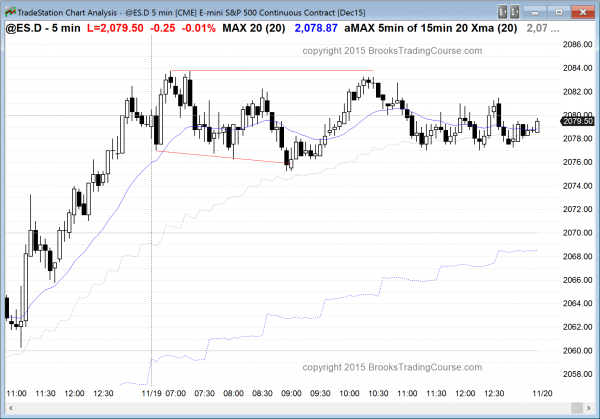 Yesterday got vacuumed up to the November 11 top of the bear breakout on the daily chart, and bulls took profits today. Tomorrow is a Friday and the bulls want a close above last week’s high after reversing up from below last week’s low earlier in the week. They are looking for signs of strength. The odds are that tomorrow will test last week’s high of 2088. However, unless the bulls break strongly above the all-time high, the October rally will just be another strong leg in a big trading range.

Today was a tight trading range on the 60 minute chart and probably a small bull flag. The odds favor a bull breakout. Since the chart is in a resistance zone on the daily and 60 minute charts, the move up will probably be limited.